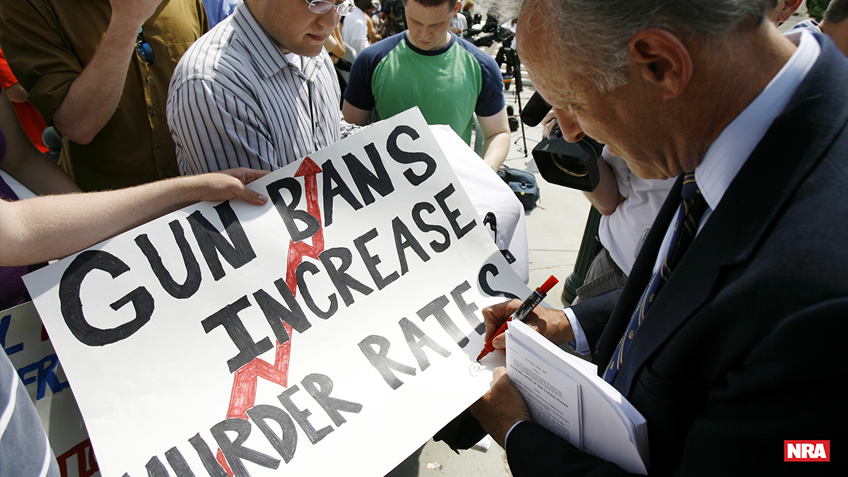 Tuesday marked the 10-year anniversary of the U.S. Supreme Court’s most significant pronouncement on the Second Amendment, District of Columbia v. Heller. That decision changed the terms of the debate over the right to keep and bear arms. Yet the battle to expand legal protection for the Second Amendment rights of law-abiding Americans continues.

Activists, including in the judiciary, had sought to convince Americans that the Second Amendment was a relic of history that had nothing to with individual rights -- that it existed only to promote organized militias. These anti-freedom activists feared that if private individuals had judicially enforceable Second Amendment rights, their designs on outright firearm prohibitions would be jeopardized. Thus, they distorted law and history to promote a falsehood about the meaning of the Second Amendment.

Heller should have put an end to their politically motivated chicanery, declaring unambiguously that the Second Amendment protects an individual right to the sorts of arms in common use for lawful purposes, without regard to service in an organized militia. A decade later, however, gun control activists – still abetted by statist judges on the lower courts – continue to press for the disarmament of the American public. As long as ordinary Americans still possess firearms, the fight to keep liberal elites from taking them will continue.

It is not surprising that the same courts who once tried to write the Second Amendment’s individual right out of existence haven’t been quick to embrace the letter or spirit of Heller. To the contrary, they have been engaged in massive resistance to its holding.  But it has often been shocking to see the undisguised disdain with which some judges have treated the Supreme Court’s ruling.

It began immediately, with states and localities insisting Heller had nothing to do with their gun control laws at all, given that the handgun ban at issue in that case had technically been enacted under federal authority. Lower courts were generally willing to back gun control advocates on this desperate gambit until the Supreme Court finally put it to rest in 2010 with McDonald v. Chicago.

“Our decision in Heller points unmistakably to the answer,” the McDonald court wrote, as if chastising all the lower courts that had, in fact, made that mistake over the preceding two years. It then went on to explain how the individual right articulated in Heller is “deeply rooted in this Nation’s history and tradition” and “among the foundational rights necessary to our system of Government.” The majority concluded, “We therefore hold that the Due Process Clause of the Fourteenth Amendment incorporates the Second Amendment right recognized in Heller.”

With the Second Amendment’s individual right now embraced as fundamental and undeniably applicable to all levels of government, it fell to anti-gun lawyers and activist judges to explain why they had been wrong all along. In other words, they had to find ways to uphold the very gun control that they earlier had claimed would have been imperiled by an individual rights holding.

Thomas was twice joined in such opinions by the late Justice Antonin Scalia, the author of Heller’s majority opinion. “Despite the clarity with which we described the Second Amendment’s core protection for the right of self-defense,” they opined on June 8, 2015, “lower courts, including the ones here, have failed to protect it.”

Six months later, the two justices again voiced their disgust when the court refused to review a Seventh Circuit opinion upholding an “assault weapon” ban. “Heller repudiates [the] approach” taken by the Seventh Circuit in resolving the case, an approach which “eviscerates many of the protections recognized in Heller and McDonald,” Thomas wrote for the pair. “I would grant certiorari to prevent the Seventh Circuit from relegating the Second Amendment to a second-class right,” he concluded.

Neil Gorsuch, President Trump’s first appointment to the U.S. Supreme Court, also joined Thomas in a June 26, 2017 dissent from a decision by the court not to review a Ninth Circuit case that effectively let stand California’s “may-issue” permitting regime for the carrying of firearms in public for self-defense. The two justices characterized the Ninth Circuit’s opinion as “indefensible” and lamented the “distressing trend” of “the treatment of the Second Amendment as a disfavored right.”

Only once has the U.S. Supreme Court revisited the Second Amendment in the years since McDonald, in a strange case from March 2016. In that case, Caetano v. Massachusetts, the court caught both friends and foes of the Second Amendment off guard with a summary, unsigned opinion ordering the state’s highest court to reconsider its decision that stun guns are not protected under the Second Amendment.

Significantly, however, Caetano was released on the same day the Supreme Court issued another order refusing to hear an appeal in the case of Bonidy v. USPS, which challenged a broad ban on the possession of firearms on postal property, even by customers in their own cars on public parking lots. The Caetano opinion, moreover, did not actually invalidate the Massachusetts law. It simply noted the state court’s reasoning “contradicts [Supreme Court] precedent” and directed the state court to revisit its conclusions based on a proper understanding of the law.

Justice Samuel Alito, joined by Justice Thomas, wrote a concurring opinion in Caetano to emphasize just how outrageously “each step of [the Massachusetts Supreme Judicial Court’s] analysis defied Heller’s reasoning.” They then ruefully noted, “This Court’s grudging per curiam now sends the case back to that same court” and expressed their concern over “state authorities who may be more concerned about disarming the people than about keeping them safe.”

But while it’s true the courts have so far failed to embrace the promise of Heller, gun owning Americans are still far better off for how it has changed the terms of the debate regarding the Second Amendment and exposed the hypocrisy of the gun control movement. Heller has been a powerful force in further legitimizing America’s unique commitment to the individual right articulated by our founders.

That’s why anti-gun extremists continue to assail the opinion and seek to undermine it in law, academia, and the popular imagination. Former Supreme Court Justice John Paul Stevens, who was on the losing side in Heller, wrote a book that advocated amending the Second Amendment to repeal its individual right, before later taking an even more extreme stance in arguing for its outright repeal. And of course Hillary Clinton infamously claimed “the Supreme Court is wrong on the Second Amendment” on the way to her historic loss in November of 2016.

Gun control advocates understand that they lost the moral high ground the moment the Supreme Court confirmed what most Americans already knew about the Second Amendment. Thus, the very same people who once mocked the idea of an individual right under the Second Amendment now disingenuously claim to “support” it, while advocating for the exact same prohibitive policies they supported before Heller was decided. Advocating against fundamental civil liberties is usually bad politics in America, and gun control advocates now face the unpalatable choice of looking transparently hypocritical or of arguing against the Bill of Rights.

Of course, Heller and its progeny have managed to produce significant changes in firearms policy in a number of cases. Chicago and D.C., which once banned handguns outright, now make licenses to carry them in public for self-defense available essentially on a shall-issue basis. That would have been unthinkable before Heller. Anti-gun cities cannot block gun sales outright within their jurisdictions. U.S. territories that once severely curtailed gun ownership have repealed or amended their laws.

And, of course, there has been a steady march of pro-gun legislation through the states, including significant gains in permitless carry and self-defense laws. Americans have also availed themselves of their rights under the Second Amendment in record numbers in recent years, with women and minorities showing historically strong levels of interest in the right to keep and bear arms.

The NRA is pursuing federal legislation to ensure that the rights articulated in Heller are not merely illusory policy statements. National concealed carry reciprocity legislation, for example, has passed the U.S. House of Representatives twice, including in this session of Congress.

Anti-gun activists, meanwhile, insist these federal protections would interfere with “states’ rights.” They have become this generation’s anti-civil rights reactionaries. Besides pressing for their own anti-gun legislation, they are openly seeking to oust gun owners or businesses from a variety of public accommodations, including access to housing, education, health care, communication media, and even financial services.

Through it all, NRA’s six million members have been in the trenches, fighting and winning important victories for the right to keep and bear arms. And with this week’s news of an upcoming vacancy on the U.S. Supreme Court, the ultimate prize is closer than ever: another chance for President Trump to appoint a justice who will help reinvigorate Second Amendment jurisprudence for decades to come.

Battle over Trump court pick to be most expensive ever