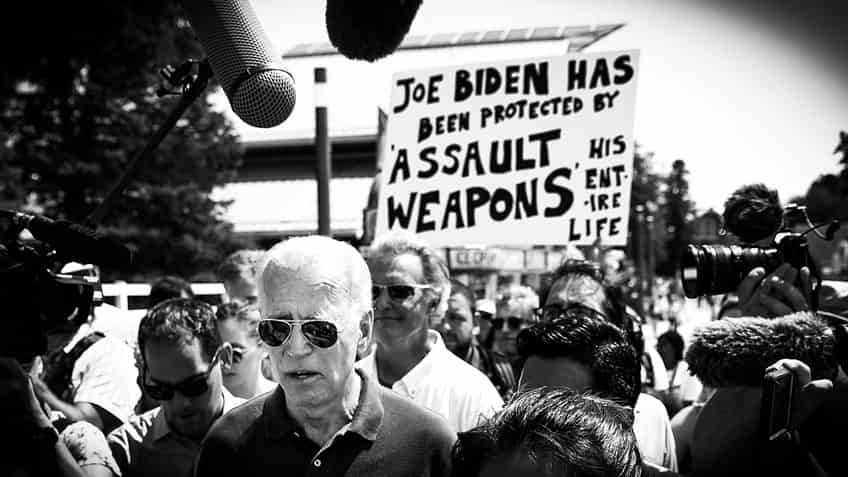 The national Democratic Party is no longer making any attempt to hide their antipathy towards guns and gun owners. Where once the party attempted to tailor their anti-gun messaging to appear moderate and appeal to some gun owners, the draft 2020 Democratic Party Platform contains a full-throated assault on firearms ownership and a blueprint for undermining every aspect of Second Amendment rights. Viewed in historical context, the draft 2020 Democratic Party Platform is the most anti-gun the party has ever put forward.

Democrats will enact universal background checks, end online sales of guns and ammunition, close dangerous loopholes that currently allow stalkers and some individuals convicted of assault or battery to buy and possess firearms, and adequately fund the federal background check system. We will close the “Charleston loophole” and prevent individuals who have been convicted of hate crimes from possessing firearms. Democrats will ban the manufacture and sale of assault weapons and high capacity magazines. We will incentivize states to enact licensing requirements for owning firearms and “red flag” laws that allow courts to temporarily remove guns from the possession of those who are a danger to themselves or others. We will pass legislation requiring that guns be safely stored in homes. And Democrats believe that gun companies should be held responsible for their products, just like any other business, and will prioritize repealing the law that shields gun manufacturers from civil liability.

The proposals include so-called “universal” background checks, the elimination of the National Instant Criminal Background Check System’s three-day safety -valve provision, and gun owner licensing, which would turn the right to keep and bear arms into a privilege dependent on the whim of government bureaucrats. The Democrats would empower government intrusions into the home to dictate how Americans keep and store firearms for self-defense and to confiscate firearms without due process based on the flimsiest of evidentiary standards. Moreover, the draft platform calls for a ban on commonly-owned semi-automatic firearms and their magazines, something explicitly prohibited under the U.S. Supreme Court’s interpretation of the Second Amendment in District of Columbia v. Heller.

Another portion of the platform states, “Democrats will also ensure the Centers for Disease Control and Prevention have sufficient resources to study gun violence as a public health issue.” At a time when the politically-biased Centers for Disease Control has come under severe criticism for its response to an actual communicable disease, the national Democratic Party platform would further distract the agency from its core mission by turning it back into a taxpayer-funded gun control factoid factory.

The gun control section of the draft 2020 Democratic platform is an escalation of the anti-gun position put forward in the 2016 platform, adding and expounding upon the positions in the earlier document. Both are notable for what they omit. Neither recognizes that Americans have a Second Amendment right to keep and bear arms

As recently as 2012, the national Democratic Party was willing to acknowledge that the Second Amendment protects an individual right to arms – something understood by the vast majority of Americans and the U.S. Supreme Court. The 2012 Democratic platform explained:

We recognize that the individual right to bear arms is an important part of the American tradition, and we will preserve Americans' Second Amendment right to own and use firearms.

We recognize that the right to bear arms is an important part of the American tradition, and we will preserve Americans' Second Amendment right to own and use firearms.

We will protect Americans’ Second Amendment right to own firearms…

Although the 2000 Democratic platform did not cite the Second Amendment, the platform stated that the party sought to regulate firearms “in ways that respect the rights of hunters, sportsmen, and legitimate gun owners.”

Earlier Democratic platforms (1996, 1992, 1980, 1976) often offered language meant to assure hunters and target shooters that their rights would not come under threat.

The Democrats’ inclusion of Second Amendment language in the platforms of the early 2000s wasn’t by mistake. After George W. Bush defeated Al Gore in the 2000 presidential election, there was a concerted effort by Democrats to moderate, or at least give the appearance of moderating, the prevailing party positions on gun control in order to better reflect the American electorate’s respect for gun rights. For instance, in 2002, the Washington Post reported on a Democratic Senate caucus retreat at which “several” senators suggested a move away from gun control. According to the item, this prompted freshman Sen. Hillary Clinton (D-N.Y.) to “[urge] her colleagues to keep their positions but change their language to be less inflammatory to swing voters.” In the mid-2000s Democratic National Committee chairman Howard Dean and Democratic Congressional Campaign Committee Chairman Rahm Emanuel also sought to shift the party’s anti-gun perception.

With the nomination of Clinton in 2016, the pretense that the national Democratic Party would respect Second Amendment rights was no longer tenable.

During the campaign, Clinton repeatedly attacked the individual right to keep and bear arms. She even attacked the U.S. Supreme Court’s decision in Heller, which recognized the individual right to arms. Clinton told the audience at a September 2015 fundraiser in New York City “the Supreme Court is wrong on the Second Amendment. And I am going to make that case every chance I get.” At a separate event in Connecticut, the former senator called Heller “a terrible decision.” When asked by ABC’s George Stephanopolous to clarify her position on the Second Amendment, the former first lady refused to acknowledge that it protects an individual right.

The career politician has endorsed the confiscation of commonly-owned semi-automatic firearms. Biden had the following exchange with CNN’s Anderson Cooper when asked about firearm confiscation during an August 5, 2019 interview:

Further, while attending a private $500 a person fundraiser in November, Biden revealed his intent to ban 9mm pistols. According to an article from the Seattle Times, while at the soiree, the 77-year-old posited to attendees “Why should we allow people to have military-style weapons including pistols with 9mm bullets and can hold 10 or more rounds?”

In Heller, the Court concluded that the types of firearms protected by the Second Amendment include those “in common use at the time” for “lawful purposes like self-defense.” The AR-15, which Biden has made clear he seeks to ban, is the most popular rifle in America and therefore undoubtedly “in common use” and protected by the Second Amendment. Similarly, industry data shows that 9mm pistols are the most common type of pistol produced.

The gun control section of the draft 2020 Democratic Party Platform is a perfect fit for the party’s presumptive presidential nominee. Both the platform drafters and the former vice president have put forward a radical gun control agenda that would further burden every aspect of gun ownership. Above all, both have exhibited a complete disregard for the Second Amendment.

Florida Alert! No Police, No Second Amendment, No guns, No Protection, No Freedom