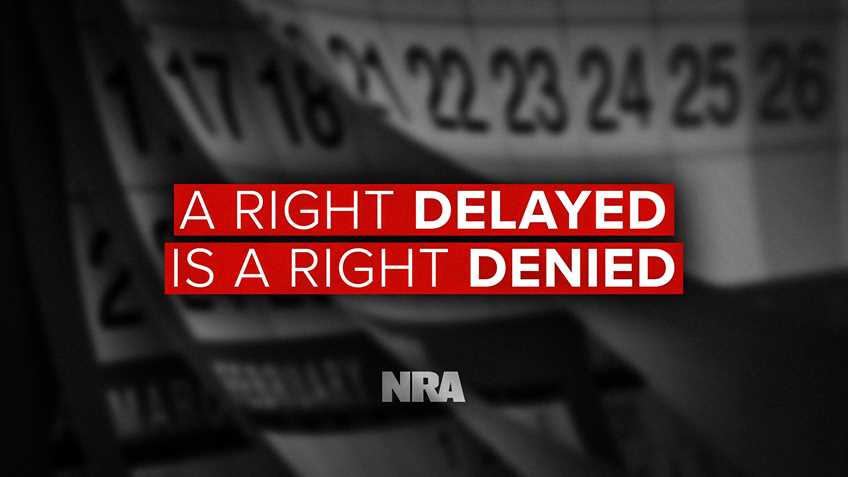 H.R. 8, which would criminalize the private transfer of firearms, has received significant attention from the gun rights community. However, H.R. 1112, which purportedly targets the inappropriately-named “Charleston loophole,” is just as insidious an attack on gun owners. Both bills were passed out of the House Judiciary Committee on Wednesday.

H.R. 1112 would eliminate the 3-day safety-valve provision under the federal firearms background check system that prevents the government from enacting an indefinite delay of firearm purchases for law-abiding Americans.  All Federal Firearms Licensees (gun dealers) are required to conduct a background check on prospective purchasers to determine if transferring the firearm would violate state or federal law. Under current law, if an FFL initiates a background check, but does not receive a determination from the National Instant Criminal Background Check System within three business days, the FFL may proceed with the firearms transfer. After the three-day window, FBI continues to research the matter that gave rise to an individual’s delay for 90 days after the check was initiated. If it is later determined that the person is prohibited from possessing firearms, the Bureau of Alcohol, Tobacco, Firearms and Explosives is notified and tasked with retrieving the firearm.

Under the proposed legislation, the 3-day safety valve would be eliminated and replaced with a procedure that provides gun buyers with no protection. If an FFL initiates a check and does not receive a response from NICS after 10 business days, the prospective purchaser may petition the FBI to permit the transfer to proceed. The FFL may not proceed with the transaction until an additional 10 business days have elapsed from the date of the petition.

Existing federal law limits the validity of a NICS background check to 30 calendar days from the date it is initiated. Because H.R. 1112 uses business days and the NICS validity provision is in calendar days, in practice, H.R. 1112 would have no default proceed available.

For example, if H.R. 1112 were to become law, gun buyers who are delayed on the busiest gun buying day of the year, Black Friday, would not be able to clear their delay under H.R. 1112’s provisions before their NICS check expired. Black Friday 2019 falls on November 29th, so the first day that the prospective purchaser could file a petition would be December 14th.

The additional 10-business day wait after the petition would make December 31st the first day that the FFL could transfer the firearm, but that would be prohibited because the NICS check expired on December 29th. The purchaser would have to begin the process again with another NICS check, with the likely result being another delay and the process beginning all over again.

Absent this provision, the FBI would have less incentive to conduct NICS checks in a timely manner. Moreover, the agency would have free reign to indefinitely delay any transfers they deem undesirable, for whatever political or purported public policy purpose they could concoct. This would turn all firearms sales from dealers into something akin to may-issue licensing. Prospective gun buyers who are not prohibited from owning firearms by law could be denied by bureaucratic dictate through the form of an indefinite delay.

Providing FBI with this sort of discretion poses a danger to Second Amendment rights. This is clear, because the FBI already attempts to use assumed discretion to encumber certain lawful gun sales.

According to the Congressional Research Service it is standard FBI practice to delay firearms transactions to those on the government’s secret watchlists. A person’s placement on a secret government watchlist with secret and nebulous criteria is not sufficient to encumber their constitutional rights, therefore they are not prohibited from possessing firearms by virtue of their watchlist status. Aside from the constitutional matter, those on the secret federal watchlists are not statutorily prohibited from possessing firearms. However, the FBI has taken upon itself to delay all background checks for those suspected of being on its secret watchlist.

As the CRS report explained,

In the case of a possible watchlist match, NICS sends a delayed transfer (for up to three business days) response to the querying federally licensed gun dealer or state POC. During a delay, NICS staff contacts immediately the FBI Headquarters’ Counterterrorism Division and FBI Special Agents in the field, and a coordinated effort is made to research possibly unknown prohibiting factors. If no prohibiting factors are uncovered within this three-day period, firearms dealers may proceed with the transaction at their discretion. However, FBI counterterrorism officials continue to work the case for up to 90 days in case disposition information is returned that permits a final determination.

Even those who have little sympathy for those who currently find themselves on secret government watchlists should understand that FBI’s dubious and assumed discretionary authority in this instance is a grave threat to liberty and that this threat would be severely exacerbated without the safety-valve provision. What group might an emboldened federal government find deplorable enough to target next?

Legislation to remove the three-day safety valve provision has been marketed as an effort to close the so-called “Charleston loophole.” The term stems from the hate-fueled 2015 shooting of several parishioners at the Emanuel African Methodist Episcopal Church in Charleston, S.C. Proponents of the legislation claim that perpetrator of the attack could have been stopped but for the three-day safety-valve provision. This is false.

On April 11, 2015, the perpetrator of the Charleston attack attempted to buy the firearm he used in the shooting from an FFL and was delayed due to an arrest for drug possession. The firearm was transferred to him five days later, absent a direct proceed order from NICS. The attack did not occur until June 17. In the intervening time, the FBI had the opportunity to continue to investigate whether the perpetrator was prohibited from possessing firearms and could have referred the case to ATF for a firearm retrieval had they determined he was indeed prohibited.

Contrary to inaccurate statements made by the FBI, the perpetrator was not prohibited from possessing firearms. Under federal law, a person is prohibited from possessing firearms if they are an “unlawful user of or addicted to any controlled substance.” The FBI has contended that the perpetrator’s arrest would have prohibited him from possessing a firearm. In turn, this has prompted gun control supporters to claim that this instance proves the FBI should be given further time to conduct NICS checks, even though the FBI had more than two months to investigate the validity of the transfer in the case. To sustain a conviction for firearm possession by an “unlawful user” federal courts require the drug use to be “sufficiently consistent, prolonged, and close in time to [the] gun possession . . . .”1 A simple drug arrest does not meet this standard.

Therefore, for multiple reasons, the ploy by this bill’s proponents of connecting the three-day safety-valve provision to the Charleston attack is simply fraudulent.

Gun rights supporters have spent the last 30 years successfully working to remove may-issue licensing schemes that empower those in government to indulge their political biases and general prejudices to control the exercise of a constitutional right. Gun owners and civil liberties supporters across the political spectrum must recognize H.R. 1112 for what it is, a measure that would subject the exercise of a constitutional right to the unfettered discretion of federal bureaucrats.