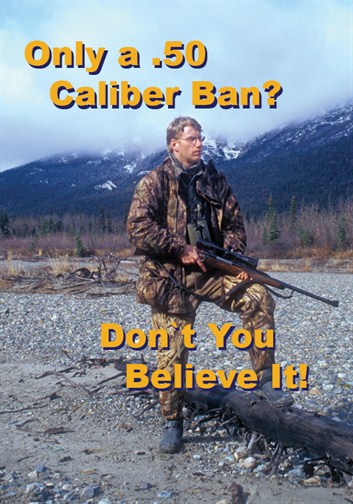 The .50 caliber is being dishonestly branded as a "terrorist" weapon, supposedly because it's a hair's breadth larger than other rifles. The anti-gunners' language reveals their true strategy: to ultimately ban all rifles, no matter their size.

The only difference between .50-caliber targets of opportunity and any other rifle is a matter of a mere fraction of an inch. If such a restriction becomes law, that will be the beginning of gun ownership "reduction" based on bore size. This .458 Lott is a mere four-one-hundredths of an inch smaller in bore diameter than a .50.

With the stage set and direction provided by the radical Violence Policy Center (VPC), CBS's "60 Minutes" used its Jan. 9, 2005, show to vilify .50-caliber rifles. The CBS/VPC story line was that these guns are "too dangerous to be in the hands of private citizens." Right on cue, anti-gun zealot Rep. Jim Moran (D-Va.) introduced the "50 Caliber Sniper Rifle Reduction Act" in Congress.

Moran's bill, H.R. 654, is a prime example of how the gun-ban crowd seeks legislation that outlaws many guns in addition to those they target directly. A ban on rifles with a bore of .5 of an inch also would include many antique and blackpowder rifles and a number of big-bore rifles owned by hunters of dangerous game. And that's only the tip of the iceberg.

In addition to a freeze on possession and transfer of all center-fire .50-caliber rifles, H.R. 654 requires guns now legally owned be placed under Title II of the Gun Control Act, and be treated like fully automatics--for starters, owners would have to register their firearms and themselves; submit to photographs and fingerprints and undergo a rigorous FBI clearance process that could last up to six months. Moran's ban would prohibit any legally registered rifle from being bought, sold, given, traded or willed. "Reduction" is accomplished with the death of the registered owner, at which time the once-private property becomes the presumed property of the U.S. government.

This far-reaching attack targets law-abiding citizens, while being disguised in ugly hype about "heavy sniper rifles" and threats of "terrorism." The propaganda war is calculated to frighten the unknowing public and fool and divide gun owners.

The centerpiece of the "60 Minutes" broadcast--as with the core of the entire VPC anti-rifle campaign--is manipulating the fear that a terrorist could use a .50-caliber rifle on U.S. soil. But one phrase hidden in the VPC's phony terrorism hype should prove to America's gun owners that they need to be personally concerned about the ".50-caliber issue." The phrase is "intermediate sniper rifle," and it is the future of the gun-ban movement.

For a practical definition, look no further than your own gun cabinet or safe. If you own a Remington 700 or a Winchester Model 70, a Ruger 77, a Weatherby Mark V or a Savage 110 variant, or any number of common bolt guns, especially in a magnum caliber, you own what the VPC would ultimately have the government treat in the same category as a "machine gun"--or ban outright.

A VPC propaganda sheet titled "Voting From the Rooftops," that supposedly targets .50 BMG rifles, shrieks about "the severe and immediate threat that heavy and intermediate civilian sniper rifles pose to public safety and national security." Read that again, dropping the "heavy" part, and you'll see what the future holds for your tack-driving magnum big-game guns, varmint rifles and target guns.

The VPC demands that these guns--your guns--be brought under the control of the National Firearms Act. Failure to register your guns--semi-autos, bolt actions, falling blocks, Trapdoors, you name it--would become a federal felony. Needless to say, an unregistered "heavy or intermediate sniper rifle" would be contraband. And under Title II of the Gun Control Act, any infraction, no matter how innocent--say, transporting a registered firearm across a state line without explicit written permission of federal authorities--could bring a 10-year prison term and large fines.

Don't believe that this "reduction" of firearms ownership by caliber will reach the smaller bores under the phony targeting of "sniper rifles?" Read what Rebecca Peters, head of the U.N.'s global gun-ban group, International Action Network on Small Arms, said about the .223 rifle used by the "Beltway sniper." In an Oct. 23, 2002, appearance on "CNN International Interview," she firmly set the parameters for her notion of an international "sniper rifle ban." In response to questions about the Washington, D.C., "sniper," Peters said: "[W];;e need to have fewer guns, but the guns that are in societies need to be under better control. And that means that civilians should not have sniper rifles, or rifles that they can kill someone at 100 meters distance, for example."

Clearly, Peters is demanding a ban on every hunting and target rifle. At the same time, Jim Moran, Hillary Clinton, John Kerry, Chuck Schumer, Ted Kennedy--you know the list--claim that the big .50 BMG is the favorite of terrorists and assassins.

"Sniper rifle," like "assault weapon," is an utterly elastic, all-encompassing term. The word these gun-banners are really focusing on is "rifle." The gun control dragon always has a need for steel and wood, but it has an even more voracious appetite for Freedom.This time, it culminates with what the gun control crowd always promised it would never go after--hunting rifles. The only difference between those .50-caliber targets of opportunity and any other rifle in private hands is a matter of a mere fraction of a millimeter or a fraction of an inch in the bore. If such a restriction becomes law, that will be the beginning of gun ownership "reduction" based on bore size.

If you think this is a stretch, remember England's handgun ban. In the beginning, when licensed gun owners fought to stop confiscation of their registered handguns, the government threw them a bone--it only banned guns of a bore size larger than .22. Honest British licensed gun owners turned in their "large bore" handguns for destruction. They were told they could keep their .22s in government-approved lockups at government-certified gun clubs.

Yet, that "bore reduction" gun control had barely been in place when British handgun owners were told the government was going to collect their registered private property from the approved armory sites--.22s suddenly had become "too big." The rest, as they say, is history.

That's "firearms reduction" by caliber. That's history. That's reality. That's where all this is headed--under the smokescreen of protecting Americans from terrorists with big-bore rifles.