As we began reporting earlier this year, President Obama has nominated anti-gun activist Vivek Murthy for the post of U.S. Surgeon General.  Particularly given the president’s determination to reinvigorate taxpayer-funded gun control propaganda under the guise of public health research, confirmation of Dr. Murthy would pose a serious threat to the rights of gun owners.  Dr. Murthy’s résumé of partisan activism on behalf of gun control, in which he specifically leveraged his status as a doctor, is detailed at length in a letter NRA-ILA Executive Director Chris Cox sent on Tuesday to Senators Mitch McConnell (R-Ky.) and Harry Reid (D-Nev.), reasserting NRA’s opposition to his nomination. 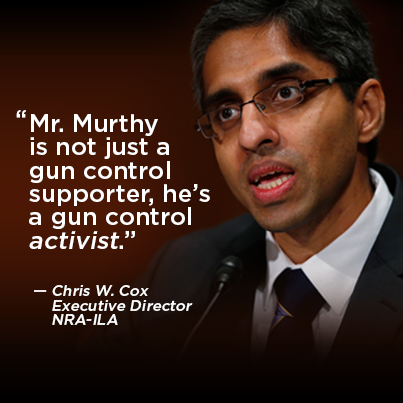 Following the outcry from pro-gun quarters that followed Dr. Murthy’s nomination earlier this year, Sen. Majority Leader Harry Reid decided to delay the confirmation vote.  Now, with a number of senators no longer fearing the electorate after having lost their bids for re-election in the midterms, or having announced their retirements, Reid is poised to make another run to confirm Dr. Murthy, with a vote that could occur at any time.  Senator Reid also led an effort to change the rules governing approval of presidential appointments last fall, initiating the so-called “nuclear option” that eliminated the filibuster on most executive and judicial appointments and allowed for approval on a simple majority vote.  Such partisan maneuvering is particularly appropriate in the case of Dr. Murthy, considering he leads an organization once known as Doctors for Obama.

Predictably, the Obama-loving media has had a field day criticizing NRA for its opposition.  Op-eds variously and contradictorily insisted that the post of surgeon general is irrelevant to gun control or that what America really needs is a surgeon general, like Murthy, who understand that “gun violence” is a “public health epidemic.”  Dr. Murthy, meanwhile, meekly pledged not to use the office of surgeon general as a bully pulpit for gun control and insisted that he will instead focus on obesity, which he called “the defining public health issue of our time.”  Of course, anyone who recalls similar assurances by other Obama appointees, or even Obama himself, has reason for skepticism.  Perhaps most absurdly, another line of attack against NRA’s opposition to Murthy’s confirmation was that it was facilitating the spread of Ebola in America.  Apparently only Dr. Murthy could explain how obesity leads to Ebola.

Yet as the letter Chris Cox sent to the Senate observes, those who deny Vivek Murthy’s gun control aspirations as surgeon general are strongly contradicted by single-issue gun control advocacy groups themselves, many of which continue to vigorously press for his confirmation.  Indeed, the Brady Campaign is so vested in the Murthy confirmation effort that it was quoted as a source about the upcoming vote by a December 5 article in The Hill magazine.  As NRA’s letter states, “the coordination between the Brady Campaign and those seeking to engineer Dr. Murthy’s confirmation heightens already significant concerns about his willingness to politicize the office of Surgeon General to promote gun control.”

Chris Cox had previously warned the Senate that “confirmation of Dr. Murthy is a prescription for disaster for America’s gun owners.”  Subsequent events have only confirmed that prognosis.

As we await Dr. Murthy's confirmation vote in the Senate, it is critically important that you immediately contact your Senators and ask them to OPPOSE confirmation of President Obama's radically anti-gun nominee--Dr. Vivek Murthy--for U.S. Surgeon General.