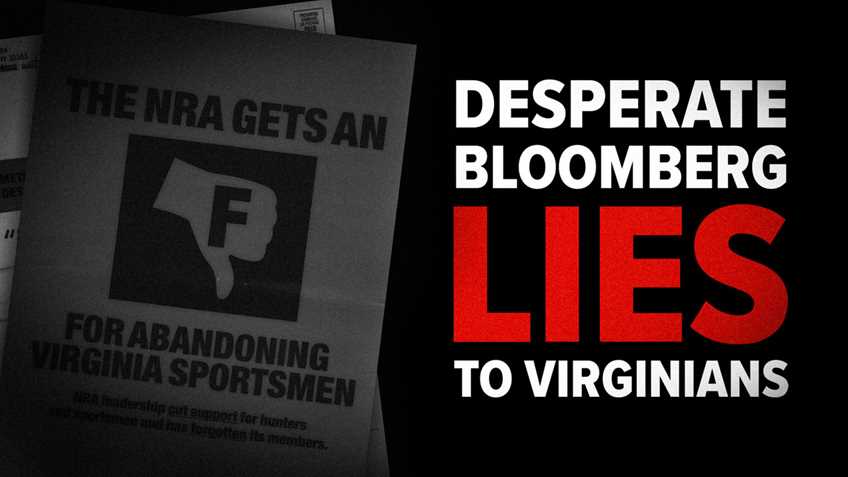 Here’s a hint for Virginia gun owners and sportsmen: When you get a firearm-related election mailing with a New York City return address and proudly proclaiming that it’s printed on soy ink, you can safely assume it doesn’t reflect reality, much less Virginians’ values on the right to keep and bear arms.  In fact, it’s probably the only time that blaze orange is being used as camouflage.

Gun control financier, former Big Apple mayor, and would-be nanny to the nation Michael Bloomberg is resorting to desperate measures and outright lies to smear the NRA ahead of Virginia’s hotly-contested election on Nov. 5.

The NRA, of course, is not on the ballot, but Bloomberg knows it is his most formidable opponent as he pours millions upon millions of dollars into the Commonwealth via his Everytown Gun Control apparatus and other AstroTurf subsidiaries. His goal is to buy the election and the subservience of his hired guns in the legislature.

Everytown’s mailing recognizes that the NRA has more grassroots clout than Everytown itself does in Virginia by stealing classic themes from the NRA’s election-related materials, including the same orange used on NRA postcards and the same type of letter-grading NRA applies to political candidates. Everytown may be hoping some recipients will even be fooled into thinking the mailing did come from a real pro-gun sportsmen's group.

But its message is all Bloomberg, a man who is so arrogant and out-of-touch that he thinks he can sit in a Manhattan skyscraper and tell Virginia’s gun owners what to think.

In bolded capital letters, the front of the mailing states: “THE NRA GETS AN F FOR ABANDONING VIRGINIA’S SPORTSMEN.”

Needless to say, the idea of Bloomberg advocating for any gun owners is absurd. He didn’t distinguish between sportsmen and other gun owners when he said: “[I]f you want to have a gun in your house, I think you’re pretty stupid….”

And, dating back to his time as mayor of New York City, Bloomberg-backed legal filings have repeatedly denied that the Second Amendment protects the fundamental right of Americans to possess a firearm for personal protection.

Yet Old Dominion gun owners know the NRA is the leading advocate for all firearm owners in the Commonwealth.

We maintain entire divisions devoted to hunting, access to public lands for hunting and target practice, and competitive shooting.

The NRA was a pioneer in modern hunting education and remains one of the leading providers and trainers for this vital component of preserving America’s hunting heritage.

The NRA has led efforts in state after state to enshrine a constitutional right to hunt and fish.

And, of course, the NRA has been the leading advocate for Sunday hunting in Virginia and elsewhere.

At the federal level, the NRA has made sure that the Pittman-Robertson Act remains true to its original purpose to promote America’s outdoor sporting heritage, including by supporting the recent passage of the Target Practice and Marksmanship Training Support Act.

REAL sportsmen and sportswomen know that without the NRA, the wide access that Americans enjoy to hunting and the outdoor shooting sports would be gravely imperiled. We’d at best look something like Great Britain, were hunting is the domain of landed gentry.

They also know that if Bloomberg were ever to succeed in depriving Americans of handguns and semi-automatic long guns, he’d eventually get around to the hunter’s bolt-action rifle and break-barrel shotgun.

The back of the Everytown mailing also contains quotes and unproven accusations maligning the NRA that are ripped out of context to make it seem like they’re coming from pro-gun sources. Needless to say, phony charges from the Far Left are all the rage these days, no matter how many times they eventually fall flat.

But no one should be surprised. Bloomberg and Everytown have a well-established history of bending or ignoring the truth, one even the legacy media cannot always ignore.

Rest assured, the NRA has and will continue to advocate for ALL gun owners, in Virginia and elsewhere. And if those who favor freedom manage to resist Bloomberg’s financial onslaught to hold or gain seats in the Virginia election, it will be due to the incredible efforts of the Commonwealth’s many thousands of hard-working NRA members. 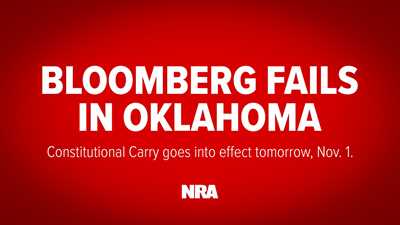