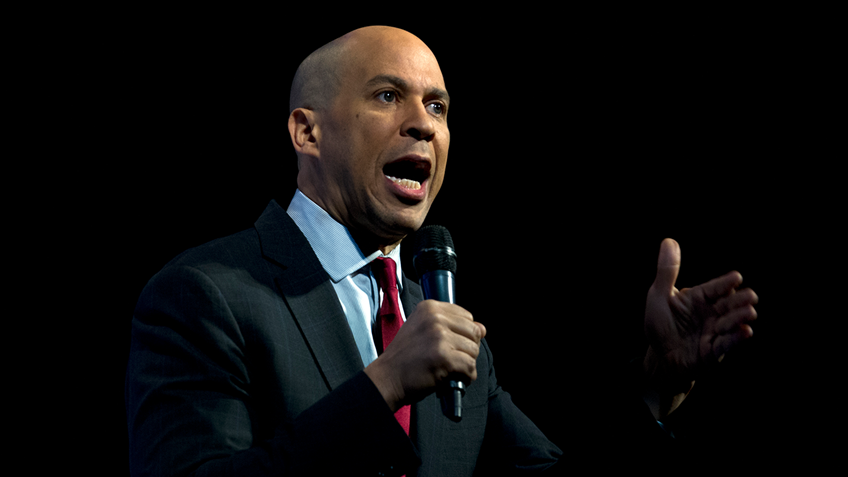 On Monday, in an obvious and desperate attempt to garner attention in an overcrowded 2020 Democratic presidential field, Sen. Cory Booker (D-N.J.) threw long-cultivated anti-gun strategy and messaging to the wind and further exposed the gun control endgame when he released his “Plan To End the Gun Violence Epidemic.” The document is a slapdash gun control advocate wish list, at the core of which is a plan to create a may-issue federal gun owner licensing scheme and confiscate millions of commonly-owned semi-automatic firearms.

As intended, Booker’s senseless gun control declaration garnered the serial grandstander modest media attention. Elaborating on his anti-gun agenda during an interview with CNN, Booker made clear his intent to imprison those who do not comply with his confiscation plan. Anchor Poppy Harlow asked the senator,

Your competitor in the 2020 race… has also, like you, proposed an assault weapons ban, but he’s proposing a buyback program. Where Americans that currently have those guns could sell them essentially to the government. But if they don’t within a certain period of time they would be prosecuted, so subject to be thrown in jail perhaps. Are you supportive of the same measure?

At first Booker equivocated, but Harlow continued to press the candidate, reiterating, “Would you prosecute people? Do you support the government buying them back, and if not, potentially people could go to jail if they don’t want to sell them back; yes or no?” While failing to directly acknowledge the logical penal consequences of his proposal, Booker responded to Harlow’s question by stating, “We should have a law that bans these weapons and we should have a reasonable period in which people can turn in these weapons.”

Booker’s proposal does not provide a definition of “assault weapon,” so it is unclear the exact firearms that would be implicated under his plan. However, given that Booker is a cosponsor of S.66, Sen. Dianne Feinstein’s (D-Calif.) “Assault Weapons Ban of 2019,” it can be deduced that the senator from New Jersey seeks to prohibit an even larger category of commonly-owned semi-automatic firearms than Bill Clinton’s 1994 ban.

For a candidate that has made criminal justice reform a focal point of his campaign, Booker’s indifference to the incarceration of nonviolent and otherwise law-abiding gun owners makes clear that his compassion does not extend to those who defy his political sensibilities. And there is ample evidence that many would defy Booker’s preferred policies.

Enacted in 2013, the New York SAFE Act required owners of commonly-owned semi-automatic firearms to register their guns with the state. An estimated 1-1.2 million firearms were implicated under the measure. Data released in 2015 revealed that 23,847 people had registered a total of 44,485 guns.

A 2013 Connecticut measure required gun owners to register certain configurations of commonly-owned semi-automatic firearms and individual magazines that could hold more than 10 rounds of ammunition. According to a 2011 report, there were an estimated 2.4 million such magazines in the state. Gun owners had registered 38,290 magazines at the registration deadline.

Booker need only to look at his home state of New Jersey to understand the folly of his proposal. An April 17, 1992 New York Times article, “Owners of Assault Guns Slow to Obey Law,” noted, “In New Jersey, which enacted an assault weapon ban in 1990, 2,000 weapons have been surrendered, made inoperable or registered as collectors' items, according to the State Police. The state Attorney General's office estimates that there are between 20,000 and 50,000 assault weapons in New Jersey.”

Aside from the impracticality and hypocrisy of Booker’s proposal, it would also be ineffective and unconstitutional. A congressionally-mandated study of the 1994 semi-automatic ban determined that “the ban’s effects on gun violence are likely to be small at best and perhaps too small for reliable measurement,” in part because, “[assault weapons] and [large capacity magazines] were used in only a minority of gun crimes prior to the 1994 federal ban.” In joining Justice Clarence Thomas in a dissent from a denial of certiorari in Friedman v. Highland Park, which concerned a local ban on commonly-owned semi-automatics, Justice Antonin Scalia made clear that existing Supreme Court precedent (which he authored in District of Columbia v. Heller) precluded bans on such firearms. In the dissent, Justice Thomas explained that “several Courts of Appeals… have upheld categorical bans on firearms that millions of Americans commonly own for lawful purposes,” which he noted was “noncompliance with our Second Amendment precedents.”

The other core aspect of Booker’s gun control agenda is federal firearm owner licensing, which he likens to a driver’s license, complete with a firearms version of the DMV. Such a license would be required to merely own a firearm.

Americans should not be required to obtain a license that serves as a prior restraint on the exercise of a constitutional right. That aside, this lazy analogy is flawed.

Constitutional scholar and UCLA School of Law Professor Eugene Volokh has pointed out on multiple occasions what treating firearm ownership like car ownership would mean in practice. In a 2014 piece for WashingtonPost.com, Volokh explained,

Cars are basically regulated as follows (I rely below on California law, but to my knowledge the rules are similar throughout the country):

(1) No federal licensing or registration of car owners.

(2) Any person may use a car on his own private property without any license or registration. See, e.g., California Vehicle Code §§ 360, 12500 (driver’s license required for driving on “highways,” defined as places that are “publicly maintained and open to the use of the public for purposes of vehicular travel”); California Vehicle Code § 4000 (same as to registration).

(3) Any adult — and in most states, 16- and 17-year-olds, as well — may get a license to use a car in public places by passing a fairly simple test that virtually everyone can pass.

(4) You can lose your license for proved misuse of the car, but not for most other misconduct; and even if you lose your driver’s license, you can usually regain it some time later.

(5) Your license from one state is good throughout the country.

Now I suspect that many gun control advocates would in reality prefer a much more onerous system of regulations for guns than for cars.

Like all of his gun control proposals, Booker’s description of the licensing scheme is short on details. However, The New York Times reported that under Booker’s proposal, the application process would include “sitting for an interview.” The only reason to subject an applicant to an interview is to inject subjective criteria into the licensing process. Under such a scheme, a person’s ability to exercise their constitutional right would be at the discretion of federal government functionary and whatever prejudices they may hold.

Perhaps unbeknownst to Booker, over the last three decades the vast majority of states have removed subjective criteria and government discretion from their concealed carry licensing procedures. In some jurisdictions, such discretion had been, and still is, used to deny residents’ right to bear arms outside the home wholesale. In other jurisdictions that discretion has fostered corruption and been abused to limit the Right-to-Carry to the rich or well-connected.

All current polling and prediction market data suggest that that Booker is not a serious candidate for president. However, unlike even more vacuous candidates, Booker does possess significant political power as the junior senator from New Jersey.

While his flagrant hostility to gun owners may be intemperate and imprudent, Booker’s proposal does serve to show the radical confiscatory aims of the gun control movement. Moreover, it should be a warning to gun owners that these fringe ideas have well-positioned backers within the corridors of power.