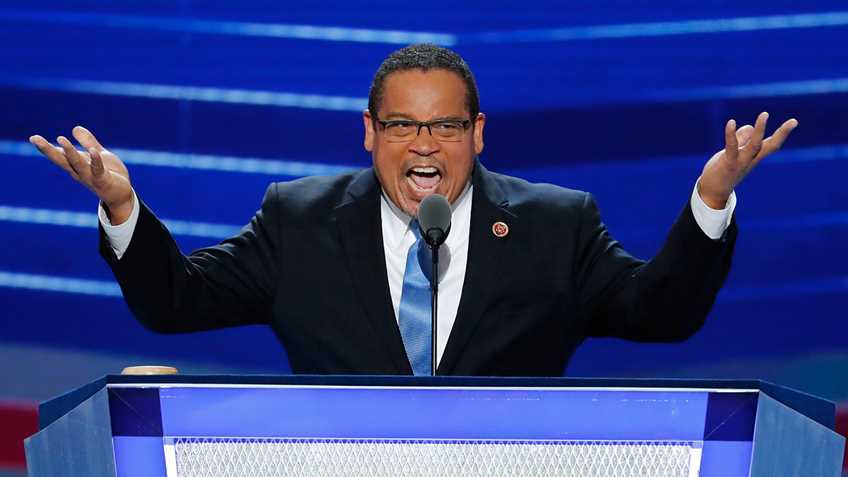 With the Democratic National Committee’s officers election set for Saturday, earlier this week CNN hosted a debate featuring the candidates vying to be the next DNC chair. During the debate, CNN’s Dana Bash confronted Rep. Keith Ellison (D-Minn.) with the severe anti-gun comments the representative made during an appearance on the March 21, 2014 episode of HBO’s Real Time with Bill Maher. In responding to the question, Ellison attempted to deceive viewers by denying his earlier statements and obfuscating his record on gun rights.

First of all, let me tell you I remember that show very well, and that is not what I said at all. What I talked about is my grandfather's shotgun, the fact that I am a turkey hunter, and I didn't say that. That was not an accurate statement.

To her credit, Bash followed up Ellison’s evasive response by reading Ellison a transcript of the statement at issue. An intransigent Ellison retorted, “I wish you'd play the tape because if you did you'd see that it did not go that way,” and later claimed that he was taken out of context.

It is unfortunate that CNN did not provide viewers with the tape of Ellison’s appearance on Maher’s program, as it makes his opposition to the Second Amendment abundantly clear. A video of Ellison’s statements can be seen here, and includes the following exchange:

Maher: Then why doesn't your party come out against the Second Amendment? It's the problem.

Maher: Really? Because I never hear anybody in the Democratic party say that. But they say, 'I am also a strong supporter.'

Ellison: You’ve got to check out the progressive caucus. We have come out very strong for common-sense gun safety rules.

In addition to pointing out Ellison’s extreme comments on HBO, in December, NRA-ILA issued a Grassroots Alert item detailing the congressman’s lengthy history of supporting severe gun controls. Those interested in a thorough accounting of Ellison’s record on Second Amendment issues are encouraged to read that item here.

In short, Ellison has opposed gun rights and supported gun control legislation dating back to his time in the Minnesota House of Representatives from 2003-2007. As a state representative, Ellison opposed Minnesota’s Right-to-Carry statute, and once enacted, sought to encumber this right with numerous restrictions.

Since joining the U.S. House of Representatives in 2007, Ellison has supported bills that would ban commonly-owned semi-automatic firearms, ban magazines with a capacity greater than 10 rounds, ban popular types of ammunition, criminalize the private transfer of firearms, require gun owners to purchase liability insurance, and expand the categories of individuals prohibited from possessing firearms. A gun control ideologue, Ellison has supported unconstitutional so-called “no-fly, no buy” legislation, despite acknowledging elsewhere the severe problems associated with the government’s use of secret watch lists.

With such a protracted history of opposition to the Second Amendment, Ellison’s flimsy debate protestations are unlikely convince anyone but his most die-hard supporters.

Having suffered a historic defeat at the hands of Donald Trump, the Democratic Party is searching for a way out of the political wilderness, with even the DNC acknowledging the need to “rebuild” the party. Saturday’s DNC chair election will be an important indicator of how the party intends to address its electoral woes on this front.

In other eras, the Democratic Party wisely deemphasized gun control, and acknowledging that they have a problem is an important first step. Radical anti-Second Amendment politicians like Ellison are part of that problem.  Stay tuned.