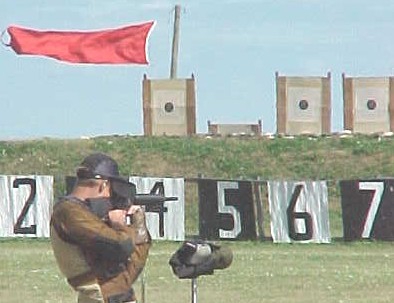 Americans own about 30 million semi-automatics--about 15% of all guns. Semi-autos are used for the same purposes as other firearms: target shooting, hunting, and protection. AR-15s, M1As, and M1s are the most popular center-fire target rifles in America, easily outnumbering all other rifles in the annual National Rifle and Pistol Championships. Semi-automatic pistols dominate NRA Bullseye and Action Pistol, Int'l Practical Shooting Confederation, and Int'l Defensive Pistol Ass'n competitions. Semi-automatic shotguns are used for skeet, trap, sporting clays, and hunting. Semi-automatic rifles, pistols, and shotguns are also used for protection. Some have historic value and are popular with collectors. Handguns are the type of gun most often used for protection, and about three-fourths of new handguns sold today are semi-automatic.

How semi-automatics operate. Like all guns other than machineguns, semi-autos fire only once when the trigger is pulled. (Only a fully-automatic firearm--a machinegun--fires repeatedly when the trigger is pulled.) Energy from a fired round of ammunition is used to cycle the firearm's loading mechanism. Contrary to the claims of "gun control" groups, semi-autos don't "spray fire" and are not "easy to convert" into machine guns. Easily convertible guns are prohibited by federal law and conversion is a federal felony punishable by 10 years in prison and a $10,000 fine.

Semi-autos are not more powerful. Semi-auto center-fire handguns use ammunition comparable to revolver ammunition. All other semi-autos use ammunition also used in other guns. "Gun control" advocates refer to semi-autos as "high-powered," hoping that the expression will frighten the public. However, a gun's internal mechanism (semi-auto, revolver, bolt-action, pump-action, etc.) doesn't dictate the power of its ammunition. The question of "power" is academic, as far as criminals are concerned. A study for the U.S. Dept. of Justice found that of 13 attributes felons look for in a handgun, "large caliber" ranked 9th.1

Semi-automatics are not disproportionately used to commit violent crimes. A study for Congress found that semi-autos affected by the Clinton "assault weapon" ban "were never used in more than a modest fraction of all gun murders," and that the ban's 10-round limit on new ammunition magazines isn't a factor in multiple-victim or multiple-wound crimes.2 A follow-up study found "gunshot injury incidents involving pistols (which use magazines) were less likely to produce a death than were those involving revolvers" and "the average number of wounds for pistol victims was actually lower than that for revolver victims."3 Police reports and felon surveys have always shown that "assault weapons" are used in only 1%-2% of violent crimes.4 Crime victim surveys indicate the figure is only 0.25%.5 Murders with knives, clubs and hands outnumber those with AWs by more than 20-to-1.6 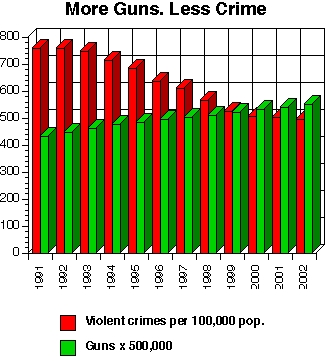 More semi-automatics and other firearms, less crime. Since 1991, the nation's violent crime rate has decreased every year, 35% overall, to a 27-year low, according to the FBI.7 According to federal crime victim surveys, violent crime is at a 30-year low.8 Meanwhile, the number of privately-owned firearms, including millions of semi-automatics, has risen by more than 60 million.9 The number of semi-automatic firearm magazines that hold more than 10 rounds (a fraction of all magazines) has risen by 50 million since 1994.10 Today, there are more firearms, including more semi-automatics, than ever.

The Clinton Gun Ban's 10-round magazine limit interferes with the right to self-defense. Police officers use standard-size magazines for good reason--their protection. Other citizens also have the right to defend themselves, and a magazine-capacity limit puts them at a disadvantage when defending themselves. The limit has other flaws too. First, most criminals who fire guns during crimes fire only three shots on average,11 fewer than the ammunition capacity of almost all detachable magazines. Second, criminals can easily defeat a limit on magazine capacity by simply ignoring the law or by carrying multiple magazines. And third, there has never been evidence to justify a limit on magazine capacity, let alone the arbitrary number of "10" rounds. Congress' study, noted above, found that the limit on new magazines has had no effect on crimes involving multiple victims or victims who receive multiple wounds.

Click To Play
Semi-Automatic Firearms and the Clinton Gun Ban