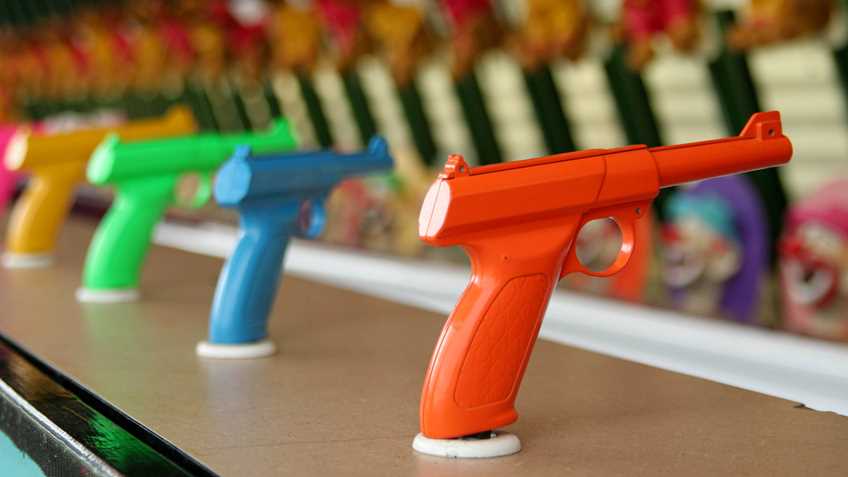 As part of the campaign to stigmatize firearms and legitimate firearm owners, gun control advocates and their allies on the left have targeted anything that resembles or is used as a proxy for a gun – partially chewed pop tarts, fingers (a “level 2 lookalike firearm”), Halloween costume props, and ordinary toys.

There are more examples than we could possibly list in this space, but a sampling of the hysterical reaction to anything remotely gun-like includes:

“Brick by Brick,” a British LEGO-inspired art exhibit that featured “handguns” assembled out of the multicolored toy bricks, attacked by The Gun Control Network because of the public safety risk “posed to the community” as the completely harmless artwork “could be accessed by those wishing to use them to enable crime” (2020).

Suspending a five-year-old kindergartner for bringing a “fake weapon” to school, where the “weapon” consisted of a transparent plastic “Disney Princess” toy that discharged soap bubbles when the trigger was pulled. School officials stated that the “bringing of weapons, real or facsimile, to our schools by students can not only create a potential safety concern but also cause a distraction for our students in the learning process…” (2016).

Several incidents last year in which students were disciplined for violations of policies that banned weapons in classrooms, after BB guns or toy guns in the home were seen during videoconference/online schooling. School officials even dispatched police to the home of a seventh-grader after a vice principal saw the boy handling a green toy pistol in his own living room in a recorded, remote-learning art class, with the school maintaining that “[s]afety will always be number one for our students and staff” (2020).

The justification for these extreme actions has rested, ostensibly, on public safety rather than politics, with officials citing zero-tolerance weapon policies, the need to curtail “terroristic behavior” in preschoolers, and the importance of awareness about potentially violent behavior and harmful tendencies. As we’ve noted earlier, though, clinical psychologist and best-selling author Michael G. Thompson, Ph.D. advises that, while “[e]veryone has an informal causation theory that playing with guns leads to the use of guns in adulthood,” there is “no scientific evidence suggesting that playing war games in childhood leads to real-life aggression.”

A recently published article on the phenomenon of children playing with toy guns (or anything they pretend is a gun) demonstrates how misguided these reactions are. Citing psychologists, psychotherapists and others, it concludes that there isn’t anything “fundamentally wrong” with pretend gunplay, and that children playing these games don’t actually want anyone to get hurt or to die. “[W]eapons are part of the real world and children are confronted with them in books, stories, radio dramas and movies, [so] I don’t think it’s advisable to declare a blanket ban on gunplay.” Banning toy guns or prohibiting children from such games may simply enhance their attraction. One of the experts suggests, instead, that parents use the opportunity for a conversation with their children about their values, and if necessary, set some polite rules, like not to use a water pistol on anyone who is not part of the game.

If nothing else, common sense and everyday experience corroborate the experts’ observations – the jails aren’t stuffed with felons and other criminals whose young lives have been ruined because of the toy pistol-to-prison pipeline.

Of course, school administrators and other officials should take seriously and respond appropriately to real violence, intimidation, and threats of violence. The real harm in disciplinary situations which treat toys and playacting as the equivalent is that the children involved are unfairly stigmatized as unstable or violent individuals. In a case involving a five–year-old girl who was disciplined after bringing a “Hello Kitty” bubble gun to school and saying to her friends, “I’ll shoot you, you shoot me, and we’ll all play together,” the school imposed a “medical/psychological evaluation” as part of its disciplinary response. The professional counselor who examined the child at the school’s behest concluded the girl was a “typical 5-year-old by temperament and interests,” and had no “evidence or history of behavioral issues or poor parenting” or “risk factors identified for violent behavior.” The school reportedly only downgraded the incident from a “terroristic threat” to the slightly less shocking “threat to harm others” because no criminal complaint was made “due to (the) ages of the children” involved.

The actual lesson behind many of these policies and bans is so obvious a child can grasp it. The point of attacking toy guns and punishing kids for fooling around with bubble blowers or dressing up as soldiers is to hammer home the message that all guns (and gun owners, by association) are inherently evil, even when guns in the family are used by good people for legitimate hunting, recreational shooting or personal protection.