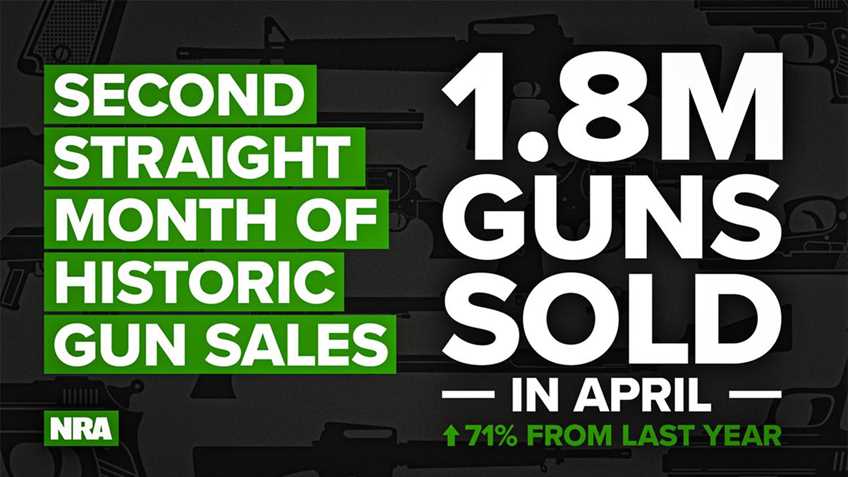 April 2020 is now the fourth-busiest month in the history of the NICS office. Moreover, the week of April 13th through the 19th is the 9th busiest week in NICS history.

To be blunt: Americans set another record for background checks last month because we are a nation of law-abiding gun owners intent on keeping ourselves and our loved ones safe. Nearly three-million background checks to purchase a firearm or obtain a permit were conducted in just the thirty days of April. That is not a small group of “super gun owners” stockpiling thousands of firearms or some small subset of the general population.

April continued the 2020 trend of record-setting months for the NICS office. January was (at the time) the sixth-busiest month ever and the busiest January by far. February saw even more checks than January, making it the third busiest month ever (at the time) and easily set the February record. March reset the all-time record with more than 3.7 million checks.

This is not an emerging trend. December 2019 saw more than 2.9 million NICS checks and was the second-busiest December ever. Before that, each of these months in 2019 had set the record for that respective month: April, May, June, August, September, October, and November. Of course, April 2020 and May 2020 shattered those respective records.

We suspect that we may see more NICS records broken this year. The anti-gun billionaires see these numbers, as do their “volunteers” and their bought-and-sold puppets. Do you think that Mike Bloomberg is going to take this as a sign that the American people support 2nd Amendment rights?

This is a man who spent more than a billion dollars on a shortsighted bid for the Democratic Presidential nomination that only lasted three months. Bloomberg and his allies – as well as those that depend on his funding for their campaigns – will double down as they try to eliminate gun rights in the United States.

We respect the millions of Americans who have decided to become law-abiding gun owners in 2020, but their rights may be revoked if they do not vote this November.

Protecting our rights will take every one of us. Every single American that applied for a permit and/or purchased a firearm this year must do everything they can to help us protect our rights.

Volunteer. Spread the word. Get your family and friends registered to vote. Vote and make your friends and family vote, too.

NRA is always looking for volunteers. See how you can help today.