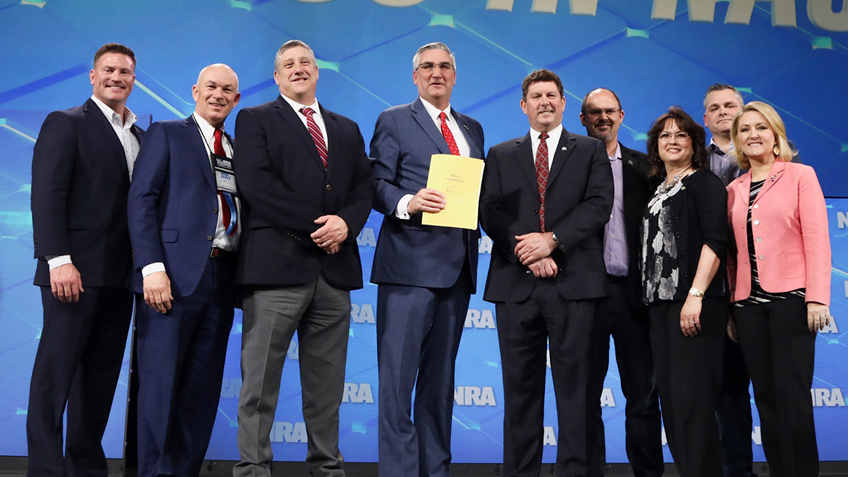 FAIRFAX, Va.–  The National Rifle Association’s Institute for Legislative Action (NRA-ILA) applauds Indiana Gov. Eric Holcomb for signing into law a comprehensive gun rights bill that will make it easier for law-abiding Hoosiers to defend themselves. Gov. Holcomb signed the bill into law on the stage of the NRA-ILA's Leadership Forum at the Indiana Convention Center - Lucas Oil Stadium.

The new law expands self-defense options in the following ways:

“Under this new law, honest, hard-working gun owners will no longer be forced to pay $125 to exercise a fundamental right that ought to be free,” said Chris W. Cox, NRA-ILA executive director. “This law ends this abuse and ensures that the most vulnerable gun owners are able to protect themselves without worrying about the cost of a license.”

Additionally, the new law provides greater protection to gun owners. Previously, an undue burden was on the defendant in exercising the right to self-defense. Under the new law, that burden is shifted.  In addition, a person who acts in self-defense and is later forced to defend themselves a second time in court can be reimbursed for the legal fees associated with their defense.

“On behalf of our more than 5 million members, I want to thank Gov. Holcomb for standing up for the rights of honest, hard-working gun owners,” added Cox. “I also want to thank Reps. Jim Lucas and Ben Smaltz for their tireless efforts promoting legislation that improves the ability of law-abiding citizens to defend themselves and their families.”