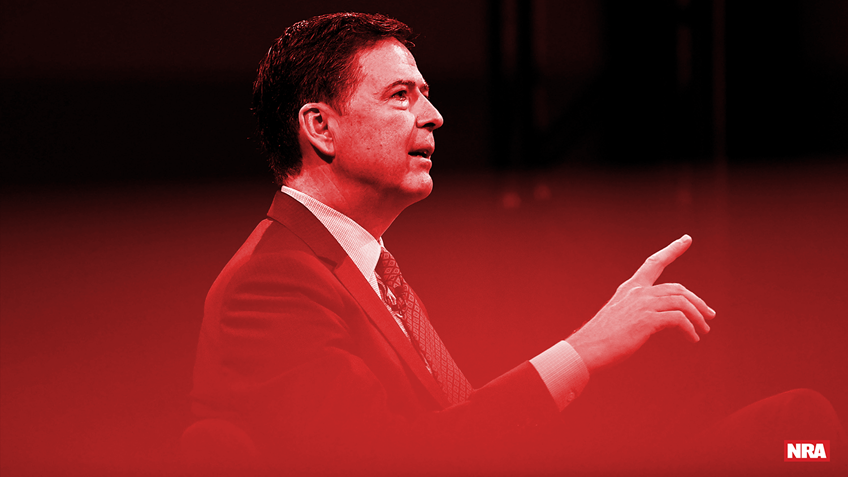 Fired FBI Director James Comey’s self-aggrandizement tour continued apace this week. Momentarily turning his attention from attacking President Trump, Comey used the occasion of a trip to the largely-disarmed United Kingdom as an opportunity to advocate for stricter U.S. gun laws and to level barbs at NRA.

In an interview with the UK’s iNews published Tuesday, Comey appeared to express his support for ongoing efforts to restrict young adults ages 18-20 from acquiring firearms and for a ban on commonly-owned semi-automatic firearms. Comey told the media outlet,

Surely there are things we can agree upon that relate to who’s able to buy a weapon, what kind of weapon and at what age, what the capabilities of the weapon are, how many rounds does it hold, and things like that, that in no way threaten the rights under the US constitution of people to keep and bear arms.

Comey’s statement on gun control is puzzling. Legislation that extinguishes young adults’ ability to exercise their Second Amendment rights is by its very nature a threat to, “the rights under the US constitution [sic] of people to keep and bear arms.” Moreover, so is a ban on commonly-owned semi-automatic firearms. That’s not just NRA’s position; that’s the position of the U.S. Supreme Court, which affirmed an individual right to keep and bear arms in the District of Columbia v. Heller case.

In Heller, the late Justice Antonin Scalia explained that the Second Amendment protects the ownership of firearms, “of the kind in common use at the time.” The AR-15, the favorite target of current gun ban legislation, is America’s most popular rifle. Moreover, Scalia Joined Justice Thomas to dissent from a denial of certiorari in the case of Friedman v. Highland Park, which concerned a ban on commonly-owned semi-automatic firearms. In the dissent, Thomas wrote,

The overwhelming majority of citizens who own and use such rifles do so for lawful purposes, including self-defense and target shooting. Under our precedents, that is all that is needed for citizens to have a right under the Second Amendment to keep such weapons.

Addressing NRA, Comey stated, “One of the worst things that goes on in the US is the current voice of the National Rifle Association, because it sells fear in the wake of any incident.” The former FBI director went on to add,

[NRA’s] constant argument is: ‘It’s a slippery slope. If we restrict a particular kind of weapon or raise the age of purchase, it means the end of gun ownership in the US.’ And that argument is a lie… There’s no slippery slope in America when it comes to guns. It’s a concrete staircase, which is our constitution…. We just have to decide should we go up a stair or down a stair.

While Comey might liken U.S. gun laws to a, “concrete staircase,” it’s unlikely many gun owners in jurisdictions such as California, New Jersey, and New York feel confident in their footing. For them the slippery slope of gun control is an everyday reality. Faced with a federal judiciary that is often unwilling to honor the rulings of the Supreme Court, as Justice Thomas has pointed out on numerous occasions, the Second Amendment offers these Americans little security.

I’m convinced that we have to have federal legislation to build on. We’re going to have to take one step at a time, and the first step is necessarily—given the political realities—going to be very modest… So then we’ll have to start working again to strengthen that law and then again to strengthen the next law, and maybe again and again. Right now, though, we’d be satisfied not with half a loaf but with a slice. Our ultimate goal—total control of handguns in the United States—is going to take time.

Moreover, the character of recent gun control efforts has made Comey’s position untenable. In March, John Paul Stevens took to the opinion page of the New York Times to call for the repeal of the Second Amendment. In recent years, the New York Times and the Boston Globe have run pieces calling for firearms confiscation. On the 2016 campaign trail, Hillary Clinton lamented the Heller decision, refused to acknowledge that the Second Amendment protects an individual right to keep and bear arms, and endorsed Australia’s confiscatory gun control measures. Anti-gun protests are replete with calls to disarm citizens.

An exchange that appears near the end of the iNews item might reveal the most about Comey. The fired FBI director explained that he chose not to carry a firearm while at the FBI, stating, “I was surrounded by armed people all day long. If I wasn’t safe in the hands of the FBI, then our country was really in trouble.” Here Comey admitted that despite being one of the nation’s highest ranking law enforcement officials, he was unwilling to concern himself with any personal responsibility for his own safety and the safety of those around him.

With Kennedy Retirement, Trump Can Secure and Strengthen a Pro-Second Amendment Supreme Court 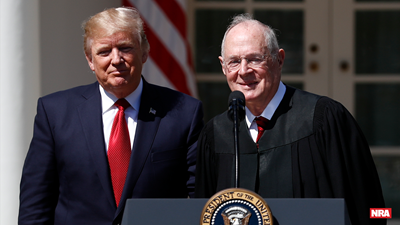