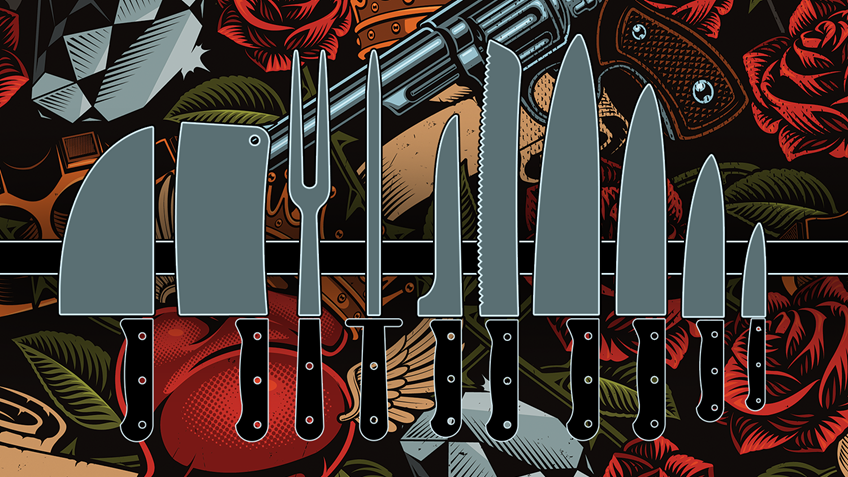 Don’t ever underestimate the British capacity for combining the oppressive with the doltish. This week, the United Kingdom’s decades-long campaign against all things martial sunk to a fresh low when one of the Queen’s more domineering subjects floated a ban on the sale, and possibly the possession, of traditional kitchen utensils. Not to be outdone, other British busybodies demanded satisfaction from a professional athlete whose firearm body art they found objectionable.

In recent months, the UK, and London in particular, has found itself in the grip of a violent crime wave. During February and March of this year, there were more murders in the UK capital than in New York City. Statistical data from the Office for National Statistics released in April noted that in England and Wales crimes “involving a knife or sharp instrument” were up 22 percent in 2017. The report added, “The past three years have seen a rise in the number of recorded offences involving a knife or sharp instrument...” Despite the island nation’s ever-increasing gun control measures, police also recorded an 11 percent increase in firearms offences for the year. UK criminals have also been using household acids to maim their victims.

A closer look at the data shows that of the offences involving a knife or sharp instrument, robberies involving these weapons increased 35 percent over the previous year. Homicide and sexual assault increased 26 and 24 percent, respectively. Regarding knife and firearms offences, the report indicates that these crimes “tend to be disproportionately concentrated in London and other metropolitan areas.”

In response to the increased bloodshed, last July the UK’s Home Office declared their support for knife turn-in programs and new restrictions on mail order knife sales. The UK prohibits knife sales to those under 18. Under the new Tory proposal, the government would enforce this rule by requiring subjects who order knives through the mail to pick them up at a retailer, where their age would be verified. In response to the acid attacks, last October Home Secretary Amber Rudd announced the Tory government’s intent to restrict the sale of corrosive substances.

These heavy-handed tactics aren’t enough for one UK official. In mid-May retiring Luton Crown Court Judge Nic Madge used his valedictory speech as an opportunity to advocate for a ban on the sale, and potentially the possession, of common kitchen knives.

According to a report from the Telegraph, Madge told his audience that the reason why the current knife restrictions have had little effect on violent crime is because “the vast majority of knives carried by youths are ordinary kitchen knives.” Upping the rhetoric, Madge added, “Every kitchen contains lethal knives which are potential murder weapons.” Paralleling a common gun control refrain, Madge asked, “why we do need eight-inch or ten-inch kitchen knives with points?”

I would urge all those with any role in relation to knives - manufacturers, shops, the police, local authorities, the government - to consider preventing the sale of long pointed knives, except in rare, defined, circumstances, and replacing such knives with rounded ends.

It might even be that the police could organise a programme whereby the owners of kitchen knives, which have been properly and lawfully bought for culinary purposes, could be taken somewhere to be modified, with the points being ground down into rounded ends.

Madge failed to address the issue of shanks. UK subjects are likely to have little difficulty constructing the homemade knives, having spent their lives in a prison.

In any other corner of the globe, Madge’s ludicrous policy proposal would have been the week’s most foolish commentary on weapons control. Not so in the Land of Hope and Glory, where even the mere depiction of a firearm is cause for panic.

On Sunday, Jamaica-born UK professional soccer player and English national team member Raheem Sterling posted a photo of a training sessions to his Instagram account. In the photo a tattoo of an M16 rifle is visible on Sterling’s right leg.

On Tuesday, British tabloid The Sun put the photo on the front page of the paper, with the headlines, “Raheem shoots himself in foot,” and “GUN TAT FURY.” According to the paper, the tattoo “triggered fury among anti-gun campaigners.”

Anti-gun activist and founder of UK group Mothers Against Guns Lucy Cope told the Sun that Sterling’s tattoo is “totally unacceptable” and that the footballer “should hang his head in shame.” Revealing the extent of her and her group’s anti-gun lunacy, Cope stated, “We demand he has the tattoo lasered off or covered up with a different tattoo… If he refuses he should be dropped from the England team. He’s supposed to be a role model but chooses to glamorise guns.”

In their race to attack Sterling for his choice of body art, the Sun and Cope neglected to take into account the athlete’s life story. Sterling, who appears to be no fan of firearms, explained, “When I was two my father died from being gunned down to death… I made a promise to myself I would never touch a gun in my life time, I shoot with my right foot so it has a deeper meaning.” According to the New York Times, the way in which Sterling was criticized for his tattoo has led some to wonder whether the outcry was fueled by racial animus.

For their part, the English Football Association has supported Sterling during the anti-gun tantrum, with a spokesperson noting, “He and the rest of the squad are focused solely on preparing for the forthcoming World Cup.”

U.S. gun owners should take careful notice of the UK’s ongoing experience with civilian disarmament. No amount of compromise or appeasement will satisfy anti-gun advocates’ urge for control.