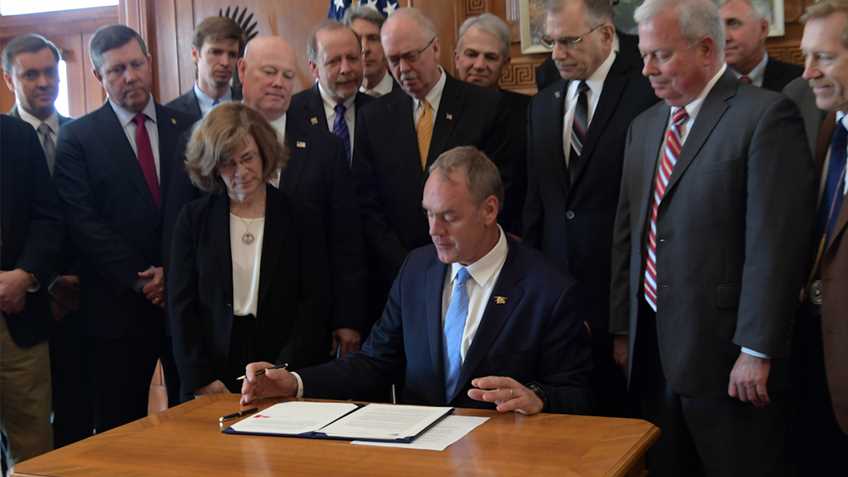 The good news for gun owners continued on Wednesday as the Senate confirmed NRA-backed nominee Ryan Zinke as the 52nd Secretary of the Interior by a bi-partisan vote of 68-31.

The Department of the Interior (DOI) plays a huge role in opportunities for hunting and sport shooting throughout the United States. The DOI’s agencies include the Bureau of Land Management, the National Park Service, and the U.S. Fish and Wildlife Service. Its components manage some 500 million acres of surface land, or about 20% of the entire U.S. landmass, including Western Public Lands, National Parks, and National Wildlife Refuges.

The Department of the Interior sets policies for the use of these lands, including whether or not they’re available for hunting and target shooting, and the rules that govern these activities.

Fortunately, America’s sportsmen and sportswomen have a friend in Ryan Zinke.

A career Navy SEAL, Zinke learned to love the outdoors growing up in Montana. During his confirmation hearing on January 17, he noted: “It was on these lands that my father [taught me] to hunt and fish and the Boy Scouts taught me the principles [of] environmental stewardship and the importance of public access.”

Chris W. Cox, executive director of the National Rifle Association's Institute for Legislative Action, praised Zinke’s confirmation. “The confirmation of an avid outdoorsman to lead the U.S. Department of the Interior marks the end of a hostile era towards hunters and sportsmen,” Cox said. “The NRA looks forward to working with Secretary Zinke in the pursuit of true conservation that respects the rights of America’s outdoorsmen and women.”

To that end, Zinke got right down to business on his very first day, signing two orders to promote hunting and to expand access to public lands.

Secretarial Order. No. 3346 repealed the Obama administration’s parting shot to hunters, which had been a plan to phase out, by the year 2022, the use of lead ammunition and fishing tackle on lands, waters, and facilities administered by the Fish and Wildlife Service.

In addition to hunters and fishermen, the Obama-era order had angered the Association of Fish and Wildlife Agencies (AFWA), the umbrella group for state agencies that manage these resources.

AWFA reacted with “utter dismay” to the Obama lead ban, noting, “It does a disservice to hunters and anglers, the firearms and angling industries, and the many professionals on staff with the USFWS who desire a trusting and transparent relationship with their state partners.”  The group characterized the Obama administration’s action as “unacceptable federal overreach” and criticized its severe and disproportionately rural economic impact.

Secretary Zinke’s statement on the repeal explained, “After reviewing the order and the process by which it was promulgated, I have determined that the Order is not mandated by any existing statutory or regulatory requirement and was issued without significant communication, consultation, or coordination with affected stakeholders.”

Secretary Zinke’s second order, No. 3347, seeks to “enhance conservation stewardship, increase outdoor recreation, and improve the management of game species and their habitat.” It recognizes recreational hunters and anglers as leaders in America’s conservation movement and invokes Theodore Roosevelt, who “loved the outdoors and vigorously hunted wildlife”.

Specifically, the order requires a report of all steps taken to implement a directive issued by President George W. Bush, “Facilitation of Hunting Heritage and Wildlife Conservation,” as well as a description of any barriers or impediments to its full implementation. These reports will then be submitted to the Wildlife and Hunting Heritage Conservation Council and the Sport Fishing and Boating Partnership Council to solicit each group’s own consensus recommendations for implementation of the Bush directive.

Using these reports and recommendations, the Department will then develop a further plan of action both to expand recreational hunting and fishing opportunities, as well as coordination, cooperation, and communication with state fish and wildlife agencies. Secretary Zinke will also appoint an official within the Immediate Office of the Secretary to coordinate and implement these efforts.

Chris W. Cox was in attendance at the signing ceremony for the secretarial orders and applauded Zinke’s quick action to undo the last-minute lead-ban, which Cox said “was not a decision based on sound scientific evidence” but “a last second attack on traditional ammunition and our hunting heritage.”

Georgia: Multiple Pro-Gun Bills Passed by the House – Heading to the Senate