Hillary Clinton, Democratic Machine All In For Gun Control In 2016

Too often, newspapers report on firearm-related issues ignorantly or with deliberate dishonesty. But the headlines shortly after the Democratic National Convention (DNC), held this year in Philadelphia, told a true story—one that every American gun owner needs to understand. From The New York Times: “After Years of Setbacks, Democrats Again See Gun Control as a Winning Issue.” From the Washington Post: “For Democrats, gun control is no longer a third rail.” And from the Los Angeles Times: “About Time for Gun Control.”

Simply put, the Second Amendment—and your God-given right to defend your life and the lives of your loved ones—is on the ballot in November. That’s not an overstatement; that’s the plain and simple truth.

There was plenty of talk about gun control at the DNC, and I’ll turn to that shortly. Talk, when it comes to politicians, can be cheap. But their actions and the company they keep speak volumes, and in the case of Hillary Clinton and the relentless focus on gun rights throughout the week at the DNC, eliminating your freedom is clearly priority number one.

And so it seemed more than coincidental that just as members of the Democratic Party were gathering in Philadelphia to coronate Hillary Clinton as their presidential nominee, the Obama administration once again released a sweeping gun control measure by executive fiat. With little fanfare or warning, the U.S. State Department’s Directorate of Defense Trade Controls (DDTC) issued a “guidance” document that sought to turn gunsmiths into regulated firearm “manufacturers” for purposes of U.S. laws governing the import and export of military materials. DDTC’s guidelines drag small businesses that perform relatively simple work on existing firearms into a regulatory regime that requires thousands of dollars in annual registration fees. Gunsmiths who fail to pay could be looking at 20 years in prison and/or a $1 million fine.

And then there was Clinton’s choice of a running mate—Tim Kaine, former governor of Virginia and current U.S. senator from that state. Perennially “F” rated by the NRA during his tenure at both the state and federal levels, Kaine has proudly voted time and again against Second Amendment-protected freedoms. Clinton herself alluded to this when she announced he would be her running mate. “[B]ehind that smile, Tim also has a backbone of steel,” she told a cheering crowd. “Just ask the NRA.”

I don’t know about Kaine’s “backbone,” but his anti-gun bona fides are ironclad. As Virginia governor, Kaine vetoed a bill that would have protected the right of Virginians to keep their own guns in their own cars. That same session, he also vetoed a bill that would have allowed concealed-carry permit holders to carry concealed handguns into restaurants that serve alcohol, provided they didn’t drink on the premises. Both measures later became law without any detriment to peace or good order in the commonwealth.

Kaine’s record has been no better in the U.S. Senate. Against the NRA’s opposition, he supported Sonia Sotomayor’s appointment to the U.S. Supreme Court. And at her first opportunity, she voted against the individual right protected by the Second Amendment. Kaine also voted for bans on private firearm sales and supported limiting the number of rounds a law-abiding person could carry in a firearm for self-defense.

I could go on, but suffice it to say that Kaine is no friend to gun owners.

Both Clinton and Kaine nevertheless voice respect for the Second Amendment, just as Barack Obama did before them.

But even as the national Democratic Party pushes to destroy the Second Amendment, gun control advocates obscure their true intentions with carefully crafted messages. That’s why they speak of “gun violence prevention” rather than “gun control.” That’s why they re-cast gun restrictions as “closing loopholes” or merely “common-sense” approaches to controlling violent crime. And that’s why a woman the media described as a former Democratic delegate and a volunteer organizer for Clinton told an investigative journalist that Clinton “for sure” would support banning guns but had to couch that agenda in benign phrases. “You say [stuff] like that and people will buy into it,” she explained.

But make no mistake, if pro-gun voters buy into the Clinton/Kaine act this November, they might never get another chance to get it right. The next president will decide whether we have a Supreme Court that does or does not believe in the Second Amendment.

And Hillary Clinton, Tim Kaine and the Democratic Party machine have made their position unmistakably clear. 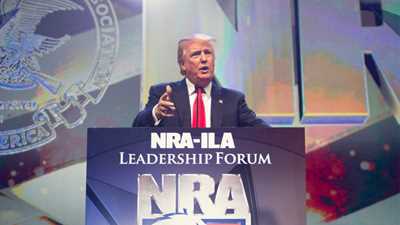