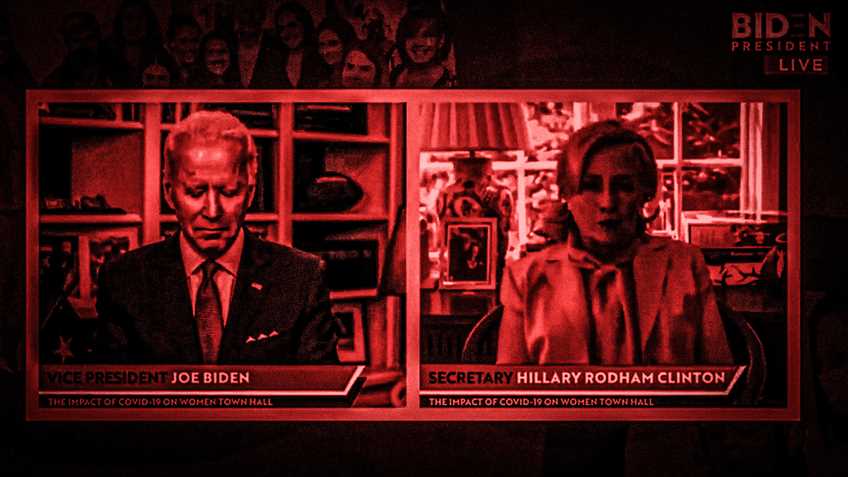 Despite ongoing speculation as to whether a deteriorating Joe Biden will even be the Democratic Party's 2020 presidential nominee, on April 28 failed 2016 Democratic presidential nominee Hillary Clinton endorsed the former vice president's White House bid. The endorsement took place during a socially distant "Women's Town Hall," where the lifelong politicians focused almost entirely on the COVID-19 pandemic. Clinton noted that the pandemic "would be a terrible crisis to waste" and urged that it should be used to enact permanent government interventions.

On the issue of gun control, the former secretary of state and the former vice president are a perfect match. Both Clinton and Biden support the prohibition and confiscation of common firearms owned by law-abiding Americans. Moreover, both reject the core holding of the U.S. Supreme Court in District of Columbia v. Heller - that the Second Amendment protects an individual right to keep and bear arms "in common use" for lawful purposes.

During an October 2015 campaign event in Keene, N.H., then-presidential candidate Clinton expressed her support for Australia-style gun confiscation. A member of the audience told the former first lady that Australia "managed to …take away …millions of handguns, and in one year, they were all gone.”He then asked her, “Can we do that?”​

The candidate responded that both Australia and the United Kingdom were "good example[s]" of how countries should respond to a “mass killing.”

“The Australian example,”she said, “that was a buyback program.”She went on to explain that the Australian government “offered a good price”for “buying hundreds of thousands of guns, and then they basically clamped down going forward ….”  They were thus able, she explained, “to curtail the supply”of guns and “to set a different standard for gun purchases in the future."

Clinton went on to say, “I think it would be worth considering doing it on the national level if that could be arranged,”adding, "certainly the Australian example is worth looking at.”​

As NRA has repeatedly pointed out, an involuntary “buyback”is gun confiscation.​

These Clinton-endorsed gun confiscation measures are right in line with what Biden has in mind for American gun owners.

When asked about commonly-owned semi-automatic firearms during an August 5, 2019 interview with CNN's Anderson Cooper, Biden and Cooper had the following exchange.

In addition to wanting to ban and confiscate America’s most popular firearms, Clinton and Biden also share denial of the Second Amendment.

During the 2016 presidential race, Clinton repeatedly made clear that she does not believe the Second Amendment protects an individual right to keep and bear arms as the U.S. Supreme Court held in D.C. v. Heller and McDonald v. Chicago.

On September 25, 2015, Clinton attended a private campaign fundraiser in Greenwich Village, New York City. An audio recording of the event captured Clinton telling those gathered, “the Supreme Court is wrong on the Second Amendment. And I am going to make that case every chance I get.”

A May 30, 2016 New York Magazine article shed more light on Clinton's radical position. The article described a scene at a Clinton campaign rally at the University of Bridgeport in Connecticut. While speaking with a family that lost a loved one in the Sandy Hook shooting, Clinton told them her plans for gun control. During the interaction, Clinton described District of Columbia v. Heller as “a terrible decision.”​

Given the opportunity to clarify her extreme position, Clinton refused to back off her incorrect interpretation of the Second Amendment. During the June 5 edition of ABC's This Week, host George Stephanopoulos asked Clinton, "

Do you believe that an individual’s right to bear arms is a constitutional right –that it’s not linked to service in a militia?"

Clinton will feel right at home in Biden's camp.

Even two years after her loss to President Donald Trump, Gallup measured Clinton's favorability rating an all-time low of 36 percent. With numbers like that, it's unclear from a political standpoint why Biden would seek out a high-profile endorsement from the two-time presidential loser. From an anti-gun policy standpoint, it makes perfect sense.