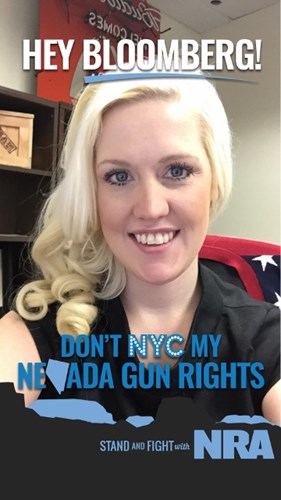 Fairfax, Va. – The National Rifle Association’s Institute for Legislative Action is debuting a Snapchat filter in conjunction with tonight’s presidential debate as part of their ongoing campaign to defeat the Bloomberg’s gun-control ballot initiative on Nevada. The Nevada-specific Snapchat filter will run before, during, and after the debate from 2-8 p.m. local time and seeks to capitalize on the attention being paid to that state’s Republican presidential debate.

The “Don’t NYC My Nevada Gun Rights” campaign is an extension of the successful anti-Bloomberg campaigns NRA-ILA ran in 2014. Over the past three years, states across the country have signed into law nearly 300 new measures protecting and expanding Second Amendment Rights. That’s almost 10 times the number of new anti-gun laws.

In the 2014 mid-term elections, more than 90 percent of NRA-backed candidates for federal, state, and local office won.

Click here to view the alert the NRA sent members in Nevada today on the Bloomberg gun control initiative.

Below are graphics of the Snapchat filter.