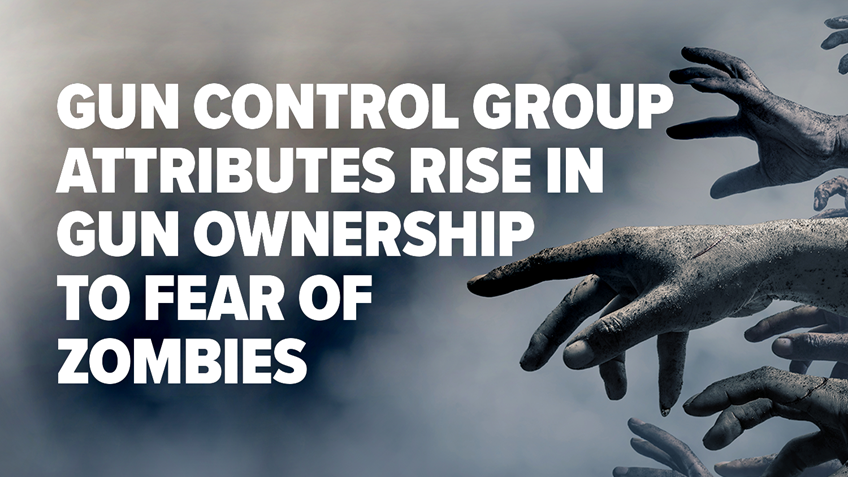 The FBI performed a record-breaking 3.7 million firearm-related background checks last month. According to an April news release from Small Arms Analytics & Forecasting (SAAF), March 2020 estimates of firearm sales show an increase of over 85% from March 2019 – single handgun sales jumped by 91%, and single long-gun sales increased by over 73%.

In an interview with Cheddar news earlier this month, David Chipman, a “senior policy advisor” for the anti-gun group Giffords, was asked about his “biggest concerns” regarding the “coronavirus gun sales spike.” (If the name rings a bell, Mr. Chipman, formerly a “senior advisor” with Bloomberg’s pre-Everytown group MAIG and an ex-ATF agent, has, among other things, advocated that AR-15 rifles should be regulated “just like” fully automatic machine guns.)

During the interview, he claimed that first-time gun owners may think “in their [own] mind they might be competent.” However, they were really “putting themselves and their families in danger” based on whether these guns were being “stored safely” and properly in the home. Sitting in what appeared to be his own kitchen, Chipman advised “those people who were first-time gun owners” to “secure that gun locked and unloaded and hide it behind the cans of tuna and beef jerky that you’ve stored in a cabinet and only bring that out if the zombies start to appear, and I don’t think they are.”

Of course, following this advice means that the firearm isn’t readily available for defensive use should the need arise. (Hiding firearms among the kitchen cabinets, the refrigerator’s vegetable drawer or in the flour bin also isn’t consistent with the Giffords philosophy of mandating that all unattended firearms be kept unloaded, with a lock in place, and secured in a gun safe or other locked container.)

The real issue – apart from why anyone would take the advice of someone who thinks beef jerky comes in cans – is Chipman’s apparent incredulity at the need to keep guns in the home for self-defense. Even with law enforcement stretched thin due to sick or quarantined officers, and hundreds of inmates being released from jails and prisons (here, here, here and here), this former ATF SWAT team member assures us all that there’s nothing to fear because, well, “the zombies” aren’t coming.

Chipman, quoted elsewhere, had expanded on his jerky-zombie theme. “If we can imagine how horrible this crisis is … the people who hoarded the guns might decide six months from now – once they see no zombies around but they’ve run out of tuna and beef jerky – that they need the money to buy food.” The “horrible” part, apparently, is not just running out of food, but the more disturbing possibility of the private sales of these firearms.

In contrast to the weird pointers on how to store guns in the kitchen, the NRA has launched new online gun safety courses to address “the growing number of first-time gun buyers during the coronavirus outbreak.” Joe DeBergalis, executive director of NRA General Operations, says “[t]hese courses will provide an option for first-time gun owners who don’t have the ability to take an NRA certified instructor-led class at their local shooting range at this time. While there is no replacement for in-person, instructor-led training, our new online classes do provide the basics of firearm safety training for those self-isolating at home.”

The zombies aren’t coming, but regardless of how gun control advocates depict this recent, unprecedented affirmation of the constitutional right to keep and bear arms, law-abiding Americans – now as ever – are putting their money on the Second Amendment to keep themselves and their families safe.