An anti-gun organization called BAWN (Ban Assault Weapons Now) has been gathering petition signatures in an effort to put a constitutional amendment on the November 2020 election ballot to ban possession of so-called "assault weapons."  In reality, the amendment would effectively BAN ALL SEMIAUTOMATIC LONG GUNS.

Under the proposed ballot language, possession of commonly owned long guns like the Ruger 10-22 rifles (including youth models), Marlin Model 60 .22 rifles, Remington Model 1100 shotguns, Benelli semi-automatic shotguns (and on and on) would be banned.

Using deliberately deceptive language, they are intentionally attempting to confuse voters by calling it an "Assault Weapons" ban.  In order to get their fraudulent amendment on the ballot, they must not only collect signatures from unsuspecting voters, they must also convince the Florida Supreme Court that the language is clear and unambiguous.  The following article is reprinted with permission.  It details much of the intentional deception perpetrated by the gun banners.

Be very clear, these gun banners want to put a GUN BAN IN THE FLORIDA CONSTITUTION so that when their scheme is exposed as a fraud, it can't be fixed by the legislature.

The three briefs against this ballot language have been filed with the Florida Supreme Court and are discussed in the article below.  LINKS to all three briefs are included following this article.

TALLAHASSEE --- The National Rifle Association condemned a proposed constitutional amendment that aims to do away with assault weapons in Florida as a “classic example of impermissible political rhetoric” designed to inflame voters’ emotions.

“The amendment hides behind political rhetoric and a misleading ballot summary to coax voters into abridging their existing right under the Florida Constitution to keep and bear arms and criminalizing the most commonly owned rifles and shotguns in America,” lawyers for the gun-rights organization wrote in a brief filed Friday with the Florida Supreme Court.

The organization’s arguments were among three briefs filed Friday in opposition to the proposed amendment, which the political committee Ban Assault Weapons NOW is trying to place on the November 2020 ballot. The Supreme Court is poised to decide whether the wording of the ballot proposal meets legal requirements.

The NRA, Attorney General Ashley Moody and the National Shooting Sports Foundation argued separately in the briefs that the proposed amendment should be blocked. The NRA focused, in part, on the term “assault weapons.”

“Coined by anti-gun activists as a derogatory and pejorative term, its prime function is not to inform and describe in a clear, neutral, and objective way, but to deliver rhetorical impact and evoke emotion and condemnation,” the NRA, represented by Andy Bardos and other GrayRobinson attorneys, said in a 34-page brief.

The NRA noted that the court previously has forbidden the use of “political rhetoric” in ballot language, which the Florida Constitution requires to be “clear and unambiguous.”

“Words such as ‘assault weapons’ that inflame and advocate have no place on the state’s official ballot,” Bardos wrote.

The Ban Assault Weapons NOW proposal emerged last year after the mass shooting at Marjory Stoneman Douglas High School in Parkland. Committee chairwoman Gail Schwartz is the aunt of Alex Schachter, who was among the 14 students and three faculty members slain during the school shooting.

To reach the ballot, Ban Assault Weapons NOW would need the Supreme Court to sign off on the wording. Also, it would need to submit 766,200 valid petition signatures to the state by a February deadline. As of Monday afternoon, it had submitted 115,529.

Moody filed an initial document with the Supreme Court in July indicating she would seek to block the amendment. Her office and the gun-rights groups filed detailed briefs Friday.

Along with objecting to the term “assault weapons,” the NRA contends the proposal fails to meet legal criteria in other ways.

For example, the NRA says the proposal fails to inform voters that it would affect not only the personal possession of most semi-automatic long guns, but also the manufacture and export of those weapons, and “thus prohibits an entire industry” in Florida.

The NRA’s lawyers also argued that the term “assault weapons” is misleading “because it evokes deceptive imagery of military-grade, combat-style weaponry,” but actually would affect a “much broader spectrum of firearms that includes virtually every semi-automatic rifle and shotgun on the market today.”

That argument mirrors one made by Moody, a Republican last November, who called the proposal “virtually a blanket ban” on long guns.

The ballot proposal would prohibit possession of “semi-automatic rifles and shotguns capable of holding more than 10 rounds of ammunition at once, either in a fixed or detachable magazine, or any other ammunition-feeding device.”

The proposal would essentially ban all long guns because they can be fitted with accessories that would allow them to hold more than 10 rounds of ammunition at once, Moody’s lawyers and other opponents of the measure argued.

“The proposed amendment is, in practical application, a ban on virtually all semi-automatic long guns. This is so because virtually all semi-automatic long guns --- either off-the-shelf or by virtue of broadly available accessories --- hold, or are ‘capable’ of holding, more than 10 rounds of ammunition,” Moody’s lawyers wrote in a 27-page brief. “The ballot summary does not disclose this effect, which Florida voters are unlikely to understand absent explanation.”

The proposal also “exempts and requires registration of assault weapons lawfully possessed” at the time the measure would go into effect.

But that provision in the ballot summary also is misleading because “it misstates the nature of the exemption,” which would apply only to current owners, Moody’s lawyers argued.

“In other words, the ballot summary creates the false impression that current owners who register their firearms would be able to lawfully transfer ownership of those firearms,” Deputy Solicitor General James H. Percival wrote.

Lawyers representing the National Shooting Sports Foundation argued that the proposed amendment “is an unlawful threat to the rights” of its members “who engage in lawful commerce in firearms and ammunition … as well as the interests of its outdoorsmen and sportsmen members.”

Proponents of the measure, which would not prohibit handguns, have two more weeks to file briefs in the case, with the Supreme Court scheduled to hold hear arguments on Feb. 4.

Ben Pollara, an adviser to the committee behind the proposal, said in August that the measure is “very simple.”

“If you have a semi-automatic rifle or shotgun that can accept a high amount of ammunition, 10 rounds or more, then it is prohibited. And if you own one of those guns when this is passed, then you can keep it,” Pollara told The News Service of Florida at the time.

“We’re not trying to take anybody’s legally owned weapons. What we’re trying to do is stop the sale and future possession of military-type assault weapons that are capable of firing of a bunch of rounds in a very short time and killing a lot of people,” he said. 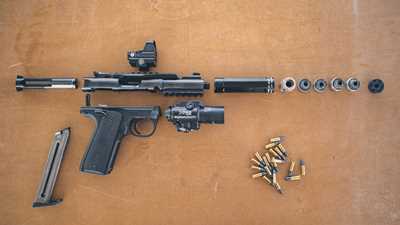