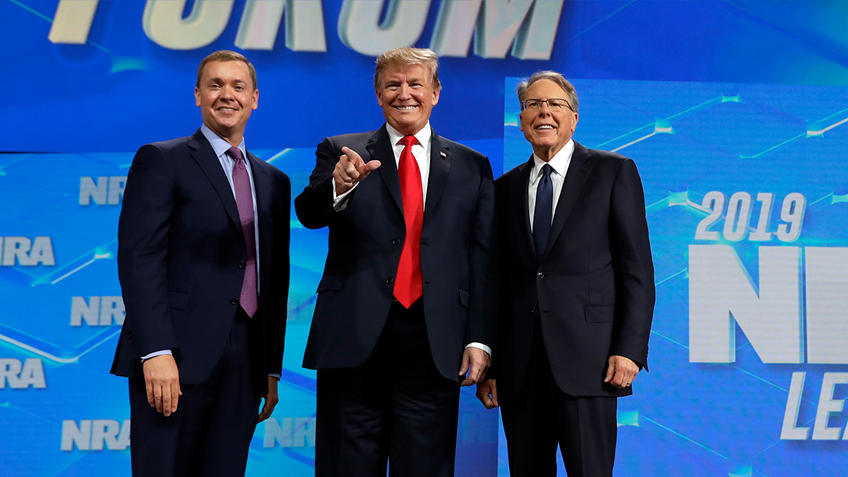 For the second year in a row, a sitting president and vice president both addressed NRA members at the 148th Annual Meetings in Indianapolis on Friday during the NRA-ILA Leadership Forum. This makes the third year in a row that President Trump joined with thousands of NRA members to share his support for our Right to Keep and Bear Arms. His is once again one for the history books. In 2017, he became the first sitting president to attend the Annual Meetings in more than three decades when he addressed the Leadership Forum in Atlanta. The last president to attend the NRA Annual Meetings was Ronald Reagan in 1983.

And just as he did last year, President Trump promised to the cheering, capacity crowd that he will protect the firearms freedom of law-abiding Americans and that recent efforts to restrict the Second Amendment will be staunchly opposed by his administration. Vice President Pence, speaking to many of his fellow Hoosiers, echoed the president’s sentiments, noting to the crowd that both he and President Trump will stand strong against any attempts to undermine our freedom. It is a vital show of support that both the President and Vice President chose to attend the NRA-ILA Forum.

During President Trump’s speech to NRA members, he showed, yet again, just how supportive he is of our rights protected under the Second Amendment. After pointing out that former President Barack Obama had signed the UN Arms Trade Treaty, but that the U.S. Senate had not ratified it, Trump announced that he would officially withdraw the United States from the treaty. The President made clear that he would not abdicate control over the rights of law-abiding gun owners to foreign bureaucrats. He then signed, in front of all in attendance, a formal letter to the Senate requesting that it halt the ratification process and return the treaty to the Oval Office, where President Trump would “dispose” of it. Needless to say, the response from the crowd was overwhelming.

In addition to the President and Vice President, the NRA-ILA Leadership Forum featured speakers from across the country, including elected officials, first responders, veterans, NRA leaders, and freedom-loving Americans from all walks of life. Of significant note, House Minority Whip, Steve Scalise (R-La.), who was seriously wounded by a deranged gunman, stood with and addressed the forum. Please join us in thanking all of the speakers who made the 2019 NRA-ILA Leadership Forum one for the history books.