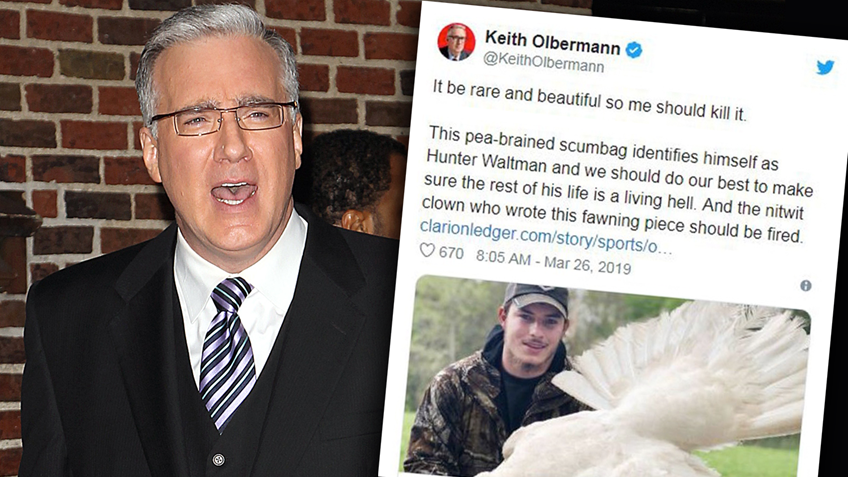 Perhaps jealous of all of the negative coverage his MSNBC protégé has received in recent days, this week ESPN host Keith Olbermann launched an unhinged Twitter attack against a Mississippi hunter that earned the political commentator widespread scorn.

The target of Olbermann’s ire was 22-year-old outdoorsman Hunter Waltman. A turkey hunter, Waltman was the subject of a piece in Jackson, Miss.’s Clarion Ledger. The article chronicled how Waltman lawfully harvested a rare white wild turkey. Olbermann also took issue with the newspaper’s outdoors writer Brian Broom for reporting on Waltman’s accomplishment.

On March 26, Olbermann tweeted out a link to the Clarion Ledger story and mocked Waltman, commenting “It be rare and beautiful so me should kill it.” Olbermann went on to state, “This pea-brained scumbag identifies himself as Hunter Waltman and we should do our best to make the rest of his life a living hell. And the nitwit clown who wrote this fawning piece should be fired.”

Olbermann doesn’t appear to have a general problem with harvesting turkeys for human consumption, reserving his scorn only for those who do so in the most ethical manner. Some astute observers pointed out that in the 1990s Olbermann served as a commercial spokesman for fast food chain Boston Market. In one television spot, the self-appointed gobbler guardian can be seen hawking a “$4 turkey melt BLT combo.”

In a follow-up article about Olbermann's belligerent comments, Waltman noted that as a result of the ESPN host’s actions he had been on the receiving end of online harassment. Waltman told the Clarion Ledger, “They text me all kinds of stuff. If he (Olbermann) hadn't done that, none of this would have happened.” The young hunter added, “To tell you the truth, it seemed like a threat to me…Make (my) life 'a living hell?' That seems like a threat to me.”

In addressing the matter, Bloom’s editor at the Clarion ledger showed support for both his writer and Waltman. With an obvious sarcasm, Clarion-Ledger’s Executive Editor Sam R. Hall tweeted, [email protected] says @BrianBroom should be fired for writing this story. What was I thinking? I guess I should have fired our outdoors writer for writing about a hunter killing an unusual turkey during turkey hunting season.” Hall went on to note, “Keith Olbermann‘s tweet was recklessly irresponsible. Someone with his following needs to understand the possible impact of his words. Telling over 1 million people to make someone’s life a living hell could have seriously dangerous consequences,” adding, “In our newsroom, that would be a fireable offense, not writing a story about a hunter bagging a turkey.”

After receiving significant criticism for his remarks about Waltman, Olbermann apologized to the hunter on Twitter. On March 27, Olbermann wrote, “I am an opponent of trophy hunting and remain so, but nobody should feel threatened. This was anything but my intent, so I unreservedly apologize to Mr. Waltman for this tweet.” Given that Olbermann explicitly called on his followers “to make the rest of [Waltman’s] life a living hell,” readers will have to judge for themselves the sincerity of the ESPN host’s apology. ESPN responded to the controversy with a statement that said, “We have spoken to him about not making personal attacks.”

Having to address the outlandish political statements of its on air personalities is a recurring problem for ESPN. In late 2017, the network’s ombudsman admitted that the purported sports station was “awash in rising political tide.” Amidst slumping ratings, in early 2018 the network promised to return its flagship SportsCenter program “to its roots as a hub of news and highlights” rather than political commentary. Olbermann is a current host of SportsCenter.

Olbermann’s latest outburst will cause some to question the network’s commitment to this return to form. It is anyone’s guess as to whether whatever internal action ESPN might have taken will be enough to prevent Olbermann from indulging his bizarre prejudices in the future. 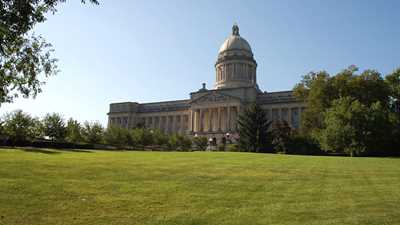