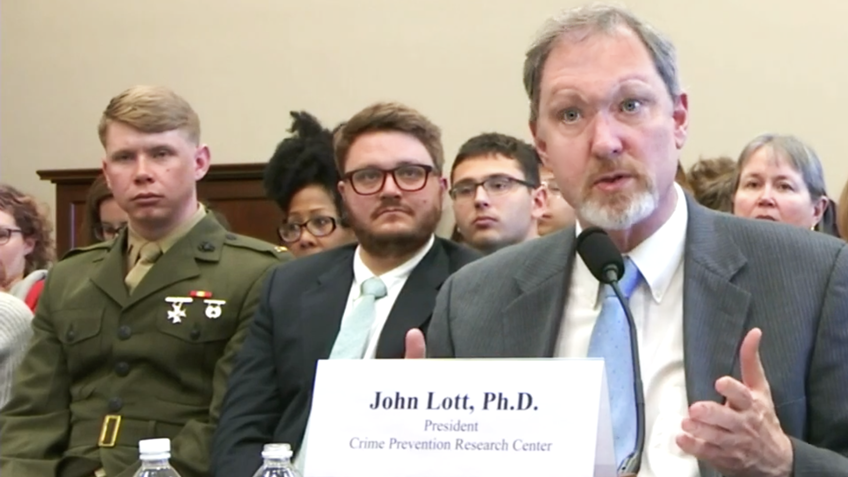 On Wednesday, the Subcommittee on Labor, Health and Human Services, Education, and Related Agencies of the U.S. House of Representatives Committee on Appropriations held a hearing supposedly geared toward “Addressing the Public Health Emergency of Gun Violence.”

That hyperbolic title, however, betrayed the real agenda of the event, which was to create the false impression that an unprecedented wave of firearm-related violence urgently demands an infusion of federal research dollars.

In truth, rates of firearm-related violence are relatively stable and near historic lows in the U.S., while tens of millions of dollars are already being poured into firearm-related studies by a variety of funding sources

To understand why taxpayer funded “gun violence research” should concern gun owners, it’s necessary to revisit current law and the history of the issue.

That makes sense, because Americans expect their tax dollars to fund (or at least hope they will fund) projects and services for the general welfare, not for self-serving ambitions of whoever happens to be in power at a given moment.

One of these provisions specifically bans using appropriations for America’s public health apparatus to lobby for limitations on Second Amendment rights. It states: “None of the funds made available in this title may be used, in whole or in part, to advocate or promote gun control” (see Title II, SEC. 210 of legislation at this link).

Versions of this limitation have been included in appropriations bills dating back to 1996, when congressional investigations revealed systemic anti-gun bias in certain components of the Centers for Disease Control and Prevention (CDC).

On March 6, 1996, a number of witnesses testified before a congressional appropriations subcommittee about how government researchers were misusing public funds to pursue a political agenda.

An Atlanta doctor noted that senior CDC staffers had for years been involved in an annual conference for organizations dedicated to using “a public health model to work toward changing society’s attitude toward guns so that it becomes socially unacceptable for private citizens to have handguns.”

Theses annual gatherings allowed the government scientists to coordinate with political activists in the gun control movement on messaging strategies.

The CDC was also funding research to promote this effort that was low-quality and of questionable significance but that was uncritically portrayed by the media as “scientific proof” that firearm ownership is dangerous.

One of the most infamous studies, for example, is still referenced by gun control advocates to this day as supposedly establishing that residents of a home with a firearm in it are more likely to be killed by that firearm than to use it in self-defense. But, as Dr. John Lott of the Crime Prevention Research Center explained at Wednesday’s hearing, 86% of the homicides covered by the study were committed by means other than the residents’ own firearms. And, he said, researchers undercounted defensive firearm use by ignoring cases in which the assailant was not actually killed with the firearm.

The overarching goal of the CDC’s efforts in the 1990s was not the earnest quest for knowledge but helping to defraud the public into believing the gun control agenda had the imprimatur and mandate of “government scientists” whose only concern was “public health.”

Congress responded to this misuse of taxpayer dollars by enacting a specific prohibition against using funds appropriated for the Department of Health and Human Services to “advocate or promote gun control.”

That provision, which is merely a more specific statement of the general rule against using appropriated funds for lobbying, has often been falsely portrayed by the media, academia, and gun control advocates as a federal ban on gun violence research.

It is true that researchers whose only interest is in pushing a predetermined agenda of gun control certainly have had a lower expectation of federal funding since this provision has been in effect. But as Dr. Lott testified to the panel, the overall volume of research into firearm-related violence actually increased in the years following the appropriations rider limiting gun control advocacy.

Moreover, pursuant to Obama-era executive actions, federal funding for research into firearm-related crime has recently been robust, with Dr. Lott testifying that over $42 million in grants were awarded for these types of projects from 2015 to 2018.

Meanwhile, generating “science” to justify gun laws continues to be a profitable industry apart from federal funding. Several state and private universities have their own well-funded efforts, and anti-gun states are increasingly using public funding for this purpose as well.

To be clear, the NRA is not opposed to using legitimate research methods for serious study into the dynamics of violent crime, including firearm-related crime.

Unfortunately, as with media reporting on firearm-related issues, there is little reason to believe that competence, professionalism, and the detached, rigorous search for knowledge are the primary drivers of these efforts.

In the end, you get what you pay for, and gun control advocates obviously see the veneer of scientific inquiry – especially when it emanates from the federal government – as providing a solid return on anti-gun propaganda investments.