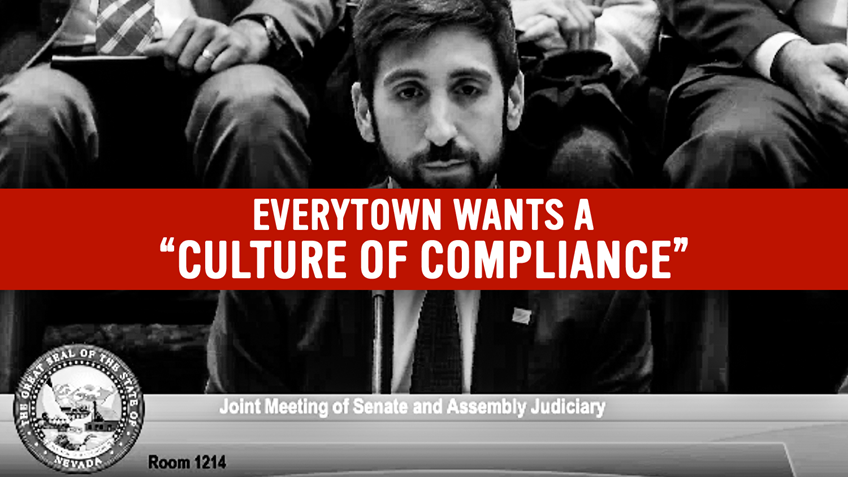 If you were still under the impression that gun control was about giving law enforcement the tools to target violent criminals, think again. At a February 12 hearing concerning Nevada Senate Bill 143 that criminalizes the private transfer of firearms, Attorney for Michael Bloomberg’s Everytown for Gun Safety William Rosen made clear that gun control is about creating more servile law-abiding gun owners.

Rosen was asked by State Assemblyman Tom Roberts (R-13), who has 34 years of law enforcement experience,

I’m really concerned about the people that don’t follow the bill, follow the law that you’re intending to pass here…. How’s law enforcement supposed to enforce this in the field? Say they’re not a prohibited person, but they still don’t abide by the transfer process, they just sell it like they’ve been doing at a gun show or whatever. How’s law enforcement supposed to investigate that and prosecute those cases?

During his response, Rosen explained, “The ultimate goal of this type of legislation is not to put people in jail but rather to create a culture of compliance where law abiding gun sellers require background checks...”

First, Rosen gave the incorrect impression that the legislation merely restricts private gun sales. In truth, the legislation criminalizes all firearms transfers that do not meet a narrow set of exemptions.

Second, Rosen revealed a foundational truth about the gun control movement. A given piece of gun control legislation is never about any purported public safety benefit the legislation might bring about. It’s about acclimating gun owners to further restrictions on their rights and setting the stage for further firearms control.

National Council to Control Handguns (now Brady Campaign to Prevent Gun Violence) Chairman Nelson T. “Pete” Shields explained this strategy in 1976, when he told The New Yorker, “I’m convinced that we have to have federal legislation to build on. We’re going to have to take one step at a time, and the first step is necessarily—given the political realities—going to be very modest.” For Shields the final goal was a complete handgun ban. Shields explained to the magazine, “Right now, though, we’d be satisfied not with half a loaf but with a slice. Our ultimate goal—total control of handguns in the United States—is going to take time.”

The goal of SB 143 couldn’t be to target criminal violence, as the data does not show that such measures are effective. A 2013 Department of Justice National Institute of Justice memo determined that so-called “universal background checks” would not be effective absent further severe gun control measures and efforts to combat straw purchasing. A 2018 survey of gun research by the RAND Corporation found that “evidence of the effect of private-seller background checks on firearm homicides is inconclusive.” A recently released survey of state and federal inmates found that their most common source of firearms was “Off the street/underground market,” defined as, “Illegal sources of firearms that include markets for stolen goods, middlemen for stolen goods, criminals or criminal enterprises, or individuals or groups involved in sales of illegal drugs.”

The enactment of SB 143 was an unfortunate setback, but Silver State gun owners and Second Amendment supporters throughout the country must continue to fight prevent the subservient future Bloomberg and his lackey’s have planned for us.