In January, while the United States government was still partially shut down, anti-gun members of the U.S. House of Representatives decided to focus on gun control rather than ensuring that the country has a functional government.

Arch anti-gunner Nancy Pelosi (D-CA) quarterbacked the effort in her capacity as Speaker of the House.

“[T]oday is … a day of action,” she said at the press conference introducing the 116th Congress’ first major gun control push. “We say enough is enough by finally bringing commonsense, bipartisan background check legislation to the Floor of the House.” As applause erupted, she added, “Isn’t that exciting?”

Joining her in the effort was Rep. Mike Thompson (D-CA), chairman of the democrat’s Gun Violence Prevention Task Force. He characterized the day’s proceedings as the culmination of a six-year effort “to find the most efficient and most effective way to help save lives.”

Their first big play was H.R. 8, the “Bipartisan Background Checks Act of 2019.” The single digit bill number was meant to convey the high priority the Democrat-controlled Congress places on gun control. Universal background checks, while inconsequential to public safety, are a necessary piece of an overall puzzle that will transform the U.S. right to keep and bear arms into a European style privilege reserved for wealthy elite who can afford to comply with burdensome, bureaucratic procedures to acquire a firearm.

The pair also chose Jan. 8 to launch their effort for ostensibly symbolic reasons. This was the date in 2011 when an assassination attempt in Tucson, Ariz. tragically wounded then U.S. Rep. Gabrielle Giffords and resulted in the deaths and injuries of innocent bystanders.

Giffords was in attendance as Pelosi and Thompson introduced H.R. 8, along with other fixtures of the anti-gun cause, including Josh Horowitz, David Hogg, Lucy McBath, and Shannon Watts.

Yet as infamous and deplorable as the Tucson event was, it was a strange occasion to use to mark the launch of a “universal” background check bill.

The individual convicted of the attempt on Giffords’s life had in fact purchased the firearm he used in his crimes from a federally licensed dealer after passing the mandatory background check.

But then the concept of “universal” background checks has always been a matter of style over substance.

For one thing, the sorts of criminals committing the vast majority of violent crimes in the United States – most of whom are legally prohibited from firearm ownership and know it -- rarely obtain crime guns directly from federally licensed dealers (FFLs), who already must run background checks on customers.

Studies by the U.S. Department of Justice – including one released the day after the H.R. 8 press conference – and others have repeatedly shown that criminals usually get the firearms possessed during their criminal acts from family members, criminal associates, the black market, or by stealing them.

Then there are the perpetrators of high profile mass murders who have not pursued a criminal lifestyle for profit or gain but who on a single occasion act out of a twisted desire for notoriety or a sadistic impulse to inflict largescale suffering and with no expectation of getting away with it. Both a 2018 report by the FBI and a 2015 article by the New York Times recognized that in the vast majority of such cases, the perpetrators obtained their firearms from a licensed dealer who conducted a background check.

If a person lacks a significant history of criminal conduct or state-mandated mental health treatment, a background check can’t simply manufacture a reason to deny them. To state the obvious, a background check looks toward the past, not toward a person’s future intentions. It cannot stop someone who remains under the radar while planning to end his life with a mass casualty event. Studies by the U.S. Department of Justice – including one released the day after the H.R. 8 press conference – and others have repeatedly shown that criminals usually get the firearms possessed during their criminal acts from family members, criminal associates, the black market, or by stealing them.

There is also the important question of how the government could enforce a “universal” background check law, given that private gun owners (unlike FFLs) are not required to identify themselves to the U.S. government.

This has led experts, including President Obama’s own Justice Department, to explain that "universal" background checks are unenforceable without a comprehensive national registry of firearms.

Indeed, the ink had hardly dried on H.R. 8 before reliably anti-gun media outlets were grudgingly acknowledging that there is virtually no evidence that universal background checks reduce firearm-related homicide or violent crime.

Vox.com, which supports increased federal gun control, admitted in a Jan. 9 article that “a growing body of research suggests that comprehensive background checks alone won’t do much, if anything, to combat gun violence in America.” The article went on to cite studies by well-established anti-gun researchers at institutions that in some cases have entire research departments devoted to producing empirical support for gun control, including U.C. Davis, Johns Hopkins, and U.C. Berkeley.

Even Michael Bloomberg’s own dedicated anti-gun propaganda outfit, The Trace, admitted on Jan. 10 that “the real-world evidence that [universal background checks] reduce crime is more complicated than the political momentum might suggest.”

While The Trace strained to portray the evidence as “complicated” and “all over the place,” it nevertheless admitted, “it’s clear that in many cases the policy isn’t working as hoped.”

Despite these concessions, Vox.com and The Trace aren’t ready to abandon their support for universal background checks, arguing they need to be better implemented and enforced to really prove their worth.

But they also gave away the game being played with H.R. 8 and similar legislation by suggesting that even if universal background checks themselves don’t reduce violent crime, they can at least support the implementation of more radical and intrusive gun control.

In particular, both outlets suggested that firearm buyers should have to go through a licensing process, while also citing research that praised the “potential synergistic effects” of simultaneously unleashing and implementing a raft of international style gun controls “within a narrow time window.”

Translation: Universal background checks, while inconsequential to public safety, are a necessary piece of an overall puzzle that will transform the U.S. right to keep and bear arms into a European style privilege reserved for wealthy elite who can afford to comply with burdensome, bureaucratic procedures to acquire a firearm.

But do law-abiding gun owners really have anything to fear from legislation like H.R. 8 in the meantime?

While the legislation is being deceptively marketed to the public as applying to gun sales and aimed at keeping guns out of the hands of dangerous and prohibited people, it is actually a broadside against gun ownership in America.

H.R. 8’s background check requirement applies not just to sales or changes of ownership but to temporary “transfers” of possession.

The simple act of handing a firearm to another person could potentially trigger penalties of up to one year in prison and/or a $1,000 fine under this legislation

Every transfer in which the recipient’s possession did not remain “exclusively … in the presence of the transferor” would have to occur on the business premises of a federal firearm licensee (FFL) and include all the usual formalities, including a background check.

While there are limited exceptions, their extreme specificity only underscores the broad scope of the general rule.

For example, there is no general exception for persons living together in the same household.

Loans or “bona fide gifts” are allowed between “parents and their children” but not between adults and children who they are raising as their own but who are not related by blood or adoption.

Likewise, exemptions apply to transfers between aunts and uncles and nieces and nephews, but a person who loaned a gun to a cousin would be committing a federal crime.

The rule is so broad, in fact, that it could interfere with transfers that even gun control advocates might consider desirable.

A suicidal person, for example, could not simply ask a trusted friend to take possession of his guns.

An elderly widow who wanted to rid herself of her husband’s large gun collection could not sell it to a long-term neighbor who has the facilities to property store and secure it.

An injured victim of a car accident could not ask an EMT or fireman to safeguard the gun in his vehicle.

All these transfers would have to be processed by an FFL.

And if there wasn’t a participating FFL in the area, or if the parties couldn’t afford whatever fees the FFL decided to charge, the transfer couldn’t happen at all.

Similar legislation – S. 42, the Background Check Expansion Act – has been introduced in the U.S. Senate by staunch firearm prohibitionist Chris Murphy (D-CT). His version would even impose felony penalties for violations.

There is, to use Nancy Pelosi’s words, nothing “commonsense,” “exciting,” “efficient,” or “effective” about these bills. With your help, the NRA will lead the fight to ensure they never become law.

The Truth about Gun Sales and H.R. 8 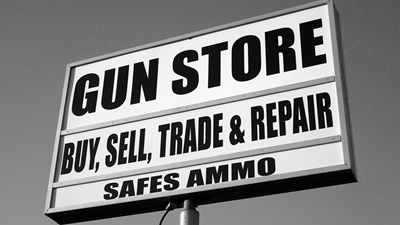