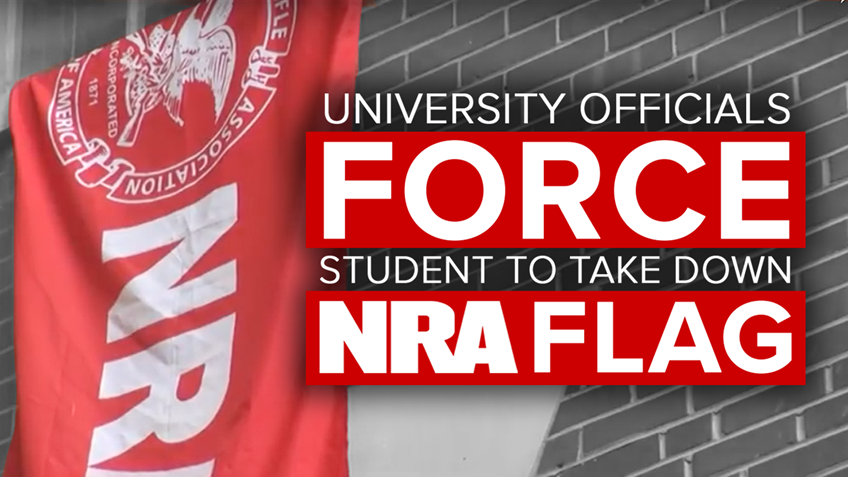 In another case of anti-gun bullying, officials at Elon University in North Carolina are reported to have forced a college freshman to remove an NRA banner from his dorm room window.

Elon’s student news channel, ENN, first reported the story. According to ENN, the student, who asked to remain anonymous, had placed a bright red NRA banner out of their dorm room window where it was widely seen and commented on by students.

According to ENN, school officials first told the student he had to remove the NRA banner because it was a fire hazard. But the Elon Fire Department chief disputed that account, saying it was not a fire hazard.

“I’ve never had an issue with a flag outside of a window,” Alva Sizemore told ENN.

The NRA’s Institute for Legislative Action weighed in on the controversy, telling ENN, “It is outrageous that Elon University would be doing this and it shows a clear anti-gun bias.”

NRA-ILA spokeswoman Catherine Mortensen added, “Young people need to know that they can support the Second Amendment and not be harassed or intimidated.”

Mortensen noted that in recent months the NRA-ILA has seen an uptick in the number of anti-gun bias cases in schools and universities.

“As a private institution, Elon certainly has the right to discriminate like this,” added Mortensen, “We only ask that they be honest and upfront with their students about their anti-gun bias.”

A university official later clarified the university's position on the NRA flag, claiming it violated the Residence Life Policy which states that "no object or materials may be attached outside windows."

After removing the NRA flag from his window, the student hung it inside his dorm room, which according to the fire chief, is more of a fire hazard than hanging it out his window!

NRA-ILA is closely monitoring public institutions for this kind of anti-gun bias and welcomes you to DM us with your story through our social media platforms.