Action Alert: Don't Let the Media and Gun Control Activists Blame You for the Actions of Criminals -- Contact Your Lawmakers Today! 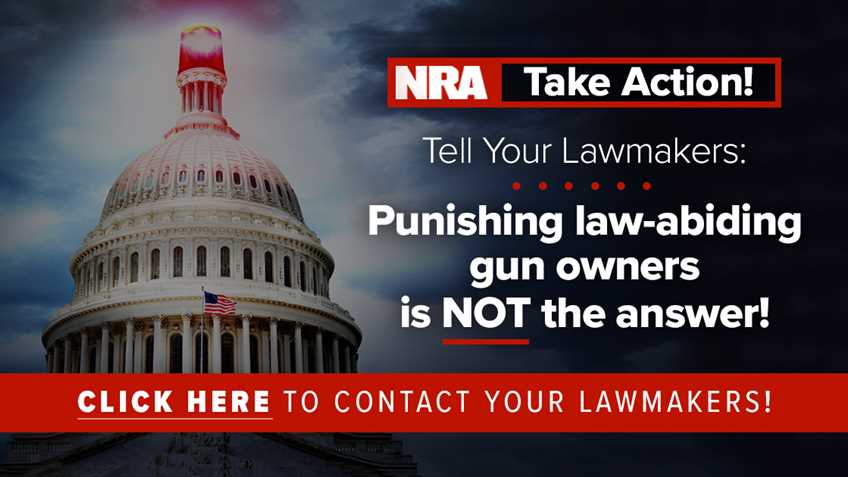 Even as the nation was grieving the terrible loss of life in Parkland, Fla., gun control activists were doing what they do best: exploiting tragedy to advance their political agenda.  Gun control activists are pushing a message that you are to blame for the criminal violence that took place last month. They’re attempting to capitalize on this tragedy to convince members of Congress to vote for their gun control wish list.

Proposals to ban the most popular rifles in America, arbitrarily limit magazine capacity, require a waiting period on all firearm sales, and restrict the right of law-abiding young adults to acquire rifles and shotguns have been suggested as “solutions” by those who wish to curtail the rights of law-abiding gun owners. Legislation encompassing these proposals could be voted on in the U.S. Congress in the coming weeks. That’s why it’s imperative that you contact your members of Congress and state lawmakers today and ask them to oppose all gun control schemes that would only impact law-abiding gun owners.

Rather than address our broken mental health system, our inability to provide proper school security, or numerous failings by law enforcement and others to identify a clearly dangerous individual, all solutions that NRA supports, their solution is simple: blame the NRA, its members, and America’s 120 million law-abiding gun owners. Make no mistake, the NRA will not let the media elites get away with blaming its members and the gun-owning public for the acts of a single deranged person or the culture of inaction that allowed him to operate unchecked.

Since 1871, the NRA has cultivated a culture of safety, competence, and responsibility among America’s gun owners. For years, we have tirelessly advocated for improving the National Instant Criminal Background Check System. We have also led the charge to increase security measures of all types in schools, including where appropriate the arming of guards or other trained personnel. America’s law-abiding gun owners have been and will remain a force for good, order, and safety in their communities.

But the media and gun control advocates want you to believe the tide has shifted and that the inevitable erosion of Second Amendment freedom is finally underway. They hope to convince lawmakers of the same thing, that history has now rendered its verdict against the Second Amendment.

The NRA is resolved to stand up to whatever forces seek to erode our freedom. Stand with us. Together, we are freedom’s last, best chance.

It’s Time for Real Talk about the Assault-Weapons ‘Ban’