Continuing this week’s theme of campus absurdities, we have yet another college professor who has taken to wearing body armor to protest campus carry by law-abiding students. This week, it’s Kevin Willmott, a film and media studies instructor at the University of Kansas. Student news site Kansan.com reported that Williams appeared for the first day of classes this semester wearing a “bulletproof vest” to protest a Kansas campus carry law that took effect in July. “Try to forget that I’m wearing a vest, and I’ll try to forget that you could be packing a .44 magnum,” Willmott told his students.

In a lengthy discussion with Kansan.com, Willmott wove a complicated web of accusations and complaints concerning the new law. First, he took issue with the fact that only concealed handguns are protected. “It’s kind of a don’t ask, don’t tell kind of a policy, and so, you’re just kind of expected to forget that they’re probably there,” he stated. “And in that sense, you’re kind of living in a lie.”

Contradictorily, he then went on to argue that concealed handguns of which people were unaware would nevertheless “puts a damper on free speech for everyone.” This was the same theory college professors from the University of Texas unsuccessfully raised in a bid to have a federal court block the Lone Star State’s campus carry law from taking effect. There, the court held that the professors’ “subjective fear” that an unnamed, unknown student would be moved to future violence because of a difference in opinion was based on “mere conjecture” and did not give rise to a legally addressable injury.

Kansan.com said that Wilmott distributed a letter to his students, explaining why he chose to wear body armor to class. He complained of feelings of fear and helplessness amongst the student body and faculty. He also said that college students may suffer from mental health issues that could be made worse by the presence of firearms.

Willmott’s arguments basically devolve to the point that he does not like firearms and that he believes society would be better off without them. That opinion is certainly his prerogative, but in a country with hundreds of millions of firearms, it’s likely Prof. Willmott and his students have been in the presence of other armed individuals, whether on campus or not and whether they knew it or not. Guns are hardly scarce in Kansas.

The conceit that violent criminals respect “gun-free zones” is itself “living in a lie” and demands students ignore that the potential for their own victimization “is probably there,” whether they typically notice it or not. Recognizing the rights of law-abiding adults to carry firearms on college campuses, as they can in most other public places in Kansas, simply allows them to choose whether or not to confront and prepare for this potentiality.

Prof. Willmott, in other words, is so rigidly wedded to typical antigun orthodoxy that he cannot recognize the irony of his own arguments. His stunt, which merely copies that of a different professor at another institution who was recently in the news, is neither original nor persuasive.

It’s telling, though, that college instructors only took to these measures when the right of law-abiding persons to bear arms was recognized on campus. We saw no such theatrics after actual tragedies in which members of campus communities suffered at the hands of criminals who were illegally carrying firearms on supposedly “gun-free” university grounds. Like most people who reflexively favor gun control, antigun academics instinctively focus their attention on people who pose the least threat. The idea that firearms can play a beneficial role in protecting the innocent is one they are unwilling to accept, no matter the evidence to the contrary.

Developments in lawful concealed carry have always been accompanied by hyperbolic predictions of the widespread mayhem that was sure to follow and that just as surely never materialized. In that regard, Prof. Willmott may want to consider expanding his own horizons beyond film theory and studying a little history.

In California, Confiscation Is No Longer A Threat. It’s The Law. 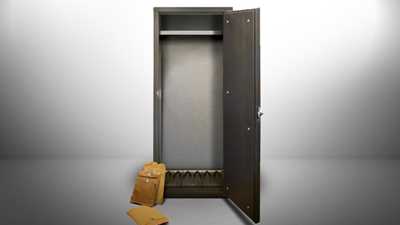