This feature appears in the September ‘17 issue of NRA America’s 1st Freedom, one of the official journals of the National Rifle Association.

In ordering the nation’s federal prosecutors to enforce tough existing laws to swiftly remove armed violent criminal predators from society, U.S. Attorney General Jeff Sessions has ended the shameful eight-year legacy of the Barack Obama administration that was marked by its refusal to even recognize laws that could have saved countless lives.

Sessions summed up the new mission of federal prosecutors: “Our motto is going to be justice for victims and consequences for criminals.”

As the nation’s chief law enforcement officer, Sessions issued new priorities for all federal prosecutors declaring, “It is the policy of the Department of Justice (DOJ) to reduce crime in America.”

With that simple redirection Sessions instructed the 94 U.S. Attorneys offices to partner with state and local law enforcement in order “to specifically identify the criminals responsible for significant violent crime in their districts. Once identified, the U.S. Attorneys offices must ensure that these drivers of violent crime are prosecuted, using the many tools at a prosecutor’s disposal.”

Specifically, the attorney general has ordered federal prosecution of violent criminals using what he called “substantial tools at their disposal,” and headed his list with federal firearms laws—laws that the NRA has long demanded be enforced to put bad guys behind bars.

Sessions summed up the new mission of federal prosecutors: “Our motto is going to be justice for victims and consequences for criminals.”

Sessions’ bold policy mirrors the 1990’s highly successful Project Exile in Richmond, Va.—an NRA-supported accelerated enforcement effort that was so successful that criminals disarmed themselves rather than face sure federal prosecution.

If strictly carried out by the U.S. attorneys, Sessions’ agenda will have the clear effect of bringing peace to some of America’s meanest streets.

And there are no meaner streets than in Chicago, a city run by a corrupt political machine that has disarmed its citizens and never demanded application of the sure and swift federal prosecution for armed thugs who laugh at that city’s catch-and-release justice system.

As every NRA member knows, under existing federal statutes, it is a federal felony punishable by a five-year mandatory prison sentence for convicted felons, drug dealers and gang members to possess any firearm. There is no aspect of criminals and firearms that is not covered by federal law. But Chicago opted out of prosecutions.

During the lawless Obama era, the city of Chicago consistently ranked at the bottom of federal court jurisdictions for gun-related prosecutions.

The carnage in Chicago has become routine. The statistics are horrifying, but the stories of human suffering are truly tragic because many deaths and maimings by armed criminals could have been prevented by swift and certain application of federal law.

Virtually every news item covering the endless Chicago murders and shootings described those arrested as having long criminal histories including offenses involving firearms—all of which are covered by strict federal mandatory penalties, but most are never even investigated.

In his effort to liberate Chicago citizens from the daily terror of violence, Sessions established a Crime Gun Strike Force, “focused on the most violent offenders, in the areas of the city with the highest concentration of firearm violence.”

The attorney general said, “Last year, more than 4,300 Chicagoans were shot, and more than 700 were killed—the deadliest year in two decades. … The [Donald] Trump administration will not let the bloodshed go on; we cannot accept these levels of violence.”

The national media that favor gun bans are choking on all of this.

In another piece, CNN whined, “The Trump administration has been criticized for calling Chicago a ‘war zone’ and ‘totally out of control’ despite not laying out a long-term vision for America’s cities.”

Can you believe that? The long-term vision is simple: Put armed violent criminals in prison. Bring peace, especially to the long-suffering residents of America’s cities.

As for the reaction of Chicago’s boss, Mayor Rahm Emanuel, USA Today summed it up this way, “Emanuel and police officials have repeatedly made the case that a large part of the problem in Chicago is that criminals have easy access to firearms and that gun laws don’t do enough to dissuade felons from picking up a weapon once they’re back on the street.”

Dissuade? How about prosecute? Not in Chicago!

Perhaps the worst coverage of the Sessions violent-crime initiative was in the New York Daily News, among the most crazed gun-ban papers in the nation. It came in a hit piece penned by editorial writer and columnist Harry Siegel.

Headlined “The long arm of AG Jeff Sessions meddles in local crime,” the News cries out for “states’ rights,” and says that the DOJ has bigger things to do.

The piece quotes several holdover officials from the Obama years, including one who charges that Sessions’ “intent is clear: to replace the Obama-era laboratory in which blue-state executives, lawmakers and prosecutors were given space to drift away from out-of-date laws … no matter how absurd or antiquated.”

In the world of the Daily News, putting armed criminals in prison is absurd and antiquated.

But there is more. Siegel quotes another “veteran law enforcement official” griping, “What Sessions is talking about is not what his machine (the DOJ) is built for. It’s like getting a Ferrari to mow your lawn. … He’s supposed to be going after Enron.”

This is the very definition of elitism in the swamp.

And that is what Jeff Sessions, Donald Trump and the NRA are about.

It’s about time someone drew a line in the sand for the good guys. 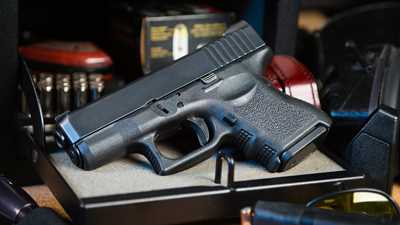