On July 17, the U.S. Court of Appeals for the Second Circuit confirmed that law enforcement officials in New York acted unlawfully with respect to guns confiscated from a Nassau County woman in 2012.

We had previously written about the legal battle to recover the guns and the initial court decision, Panzella v. Nassau County, No. 13-cv-05640 (E.D. N.Y. Aug. 26, 2015), where the federal court ruled that the Nassau County Sheriff’s Department could not rely on a “retention policy” to retain the confiscated guns without providing the owner with a due process hearing.

To recap, in June 2012, Christine Panzella alleged that her ex-husband was in arrears on his court-ordered child support. The day after she sent a letter to the support collection authorities, her ex-husband (a former police officer) applied for and obtained a temporary order of protection against her. That order, in effect until December 2012, was issued ex parte (where the affected person has no notice or opportunity to appear) and without a court hearing.

Such orders are authorized by the New York Family Court Act. The family court may include, as part of the order, a requirement that the person subject to the order surrender firearms in their possession to law enforcement. This order, though, had no surrender directive or order that would allow officers to seize or confiscate any guns. And although the order listed a generic warning regarding the federal law (“It is a federal crime to . . . buy, possess or transfer a handgun, rifle, shotgun or other firearm while this Order remains in effect…”), that law had no application because ex parte protection orders are not firearm-disqualifying under federal law.

Nonetheless, when deputies from Nassau County arrived at Ms. Panzella’s home a few days later, they demanded that she surrender the guns in the home. The deputies confiscated several long guns, including a shotgun that belonged to her then fiancé.

Ms. Panzella maintained that the order of protection was groundless and indeed, it was ultimately withdrawn by her ex-husband and dismissed by the court. Once the order terminated, Ms. Panzella made several fruitless requests that Nassau County law enforcement return her guns. Officials refused, citing their “retention policy” that required lawful gun owners to first obtain a court order compelling the return of their property.

Once Ms. Panzella initiated legal proceedings, Nassau County sought to dismiss her complaint and raised a “legislative glitch” in New York State laws, where the Family Court had the authority to order the surrender of guns without a corresponding authority to compel their return once confiscated. While this “glitch” allegedly left the County “powerless” to return the guns, it apparently didn’t prevent it from allowing confiscated guns to be sold or transferred to a third party pursuant to N.Y. Penal Law § 400.05(6), or impede the return of the fiancé’s shotgun without a court order (it seems a sheriff’s department official simply handed his gun back to him in a parking lot).

The court hearing the case at first instance ruled that due process under the Fourteenth Amendment to the U.S. Constitution required that persons whose guns were confiscated, like Ms. Panzella, be provided with a prompt “post-deprivation” hearing once the Family Court order expired or was terminated. In such hearings, the County would have the legal burden of establishing that it was likely to succeed in any proceedings to maintain possession of the confiscated guns. A failure to meet this standard meant the guns would have to be returned. As for the County’s “legislative glitch” argument, this was not relevant because the Family Court did not expressly order Ms. Panzella to surrender (or law enforcement to confiscate) her long guns. The court declined to address any other claims until after the required hearing occurred.

On appeal, the U.S. Court of Appeals for the Second Circuit affirmed, addressing only the question of appropriate due process. The continued retention of the confiscated guns mandated a hearing. Requiring gun owners like Ms. Panzella to initiate legal proceedings to recover their property did not provide a satisfactory alternative to a post-deprivation hearing because litigation placed the burden on the person whose property was taken, and required a significant investment of both time and money.

Christine Panzella is likely all too well aware of the time and money associated with legal proceedings. For her and other Nassau County gun owners, the “retention policy” meant a choice between expensive, time-consuming litigation or abandoning their lawful property. It’s been five years and counting since her guns were confiscated, and the litigation is far from concluded.

Much has been written about the dedication of female civil rights activists and fighters for justice who battle on, no matter what. We’re not sure how Christine Panzella’s saga will end, but we applaud her and other Second Amendment persisters in fighting the hard fight for what’s right.

The Need for National Reciprocity 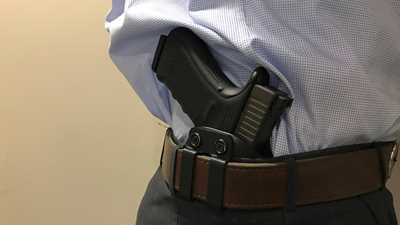