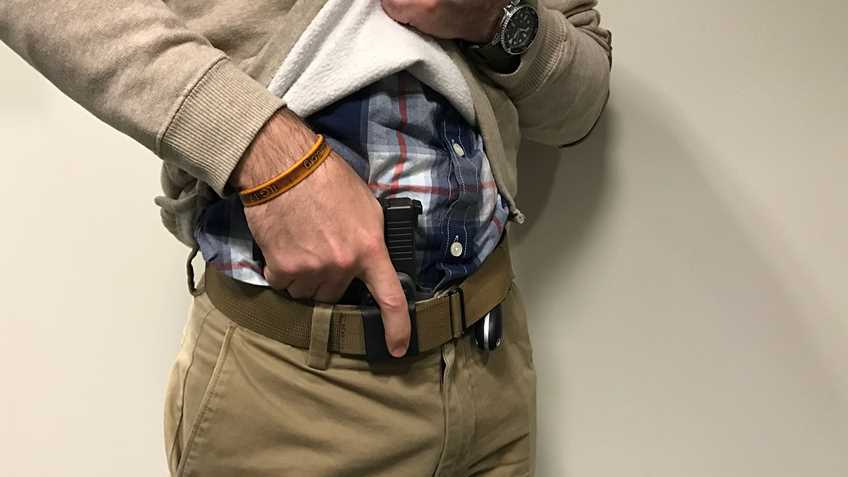 Both bills seek to address the problem of law-abiding concealed carry permit holders having to negotiate a confusing maze of laws, reciprocity agreements, and recognition statutes when they travel out of state.

Currently, every state has a legal mechanism for the concealed carry of handguns for self-defense. And while reciprocity or recognition of non-resident permits is the norm between states, a handful of states that receive travelers from all over the country don’t recognize permits from other states. This leads to otherwise law-abiding people getting crossways with the law, having their valuable firearms seized, and even facing felony prosecution and mandatory prison time.

Like Shaneen Allen, a single mother of two who obtained her Pennsylvania concealed carry permit after being robbed twice within a year.

Like Raymond Hughes, a corrections officer from Pennsylvania who was traveling in New Jersey when a drunk driver collided with his vehicle and sent him to the hospital.

Like Meredith Graves, a nurse and medical student who voluntarily disclosed to security personnel at the 9/11 Memorial in New York City that she was carrying a concealed handgun on a Tennessee permit.

Like Jamie Kiklis, a decorated combat veteran and New Hampshire permittee who pulled over in Massachusetts to text his girlfriend that he was running late for their date.

Their only “crimes” were failing to realize that their permits would not protect them in certain states. Yet all of them were initially subject to felony prosecution and dragged through the courts at great financial and emotional expense. Some of them even ended up with criminal records that will follow them for the rest of their lives.

As with Hudson’s bill, Cornyn’s legislation would ensure that individuals with a valid concealed carry permit or who are otherwise legally eligible to carry in their states of residence could travel interstate while carrying a concealed handgun for self-defense or other lawful purposes. Rules of behavior for carrying firearms in each state would continue to apply.

This common-sense legislation is opposed by gun control advocates who wrongly insist that it will allow “dangerous” people to carry guns interstate and will undermine the laws of states that severely restrict concealed carry.

Needless to say, no state has an interest in licensing dangerous people to carry firearms, and all have procedures to screen out ineligible applicants. The evidence shows, moreover, that concealed carry permittees are some of the most law-abiding citizens in the United States.  And dangerous criminals have been unlawfully carrying guns wherever they go throughout the nation’s history. All this legislation would do is put law-abiding people on equal footing with armed criminals while traveling from state to state.

It’s easy to see what the real source of opposition is. The same states that severely restrict carry by their own residents also refuse to recognize non-resident permits. These include California, Connecticut, the District of Columbia, Hawaii, Maryland, Massachusetts, New Jersey, New York, and Rhode Island.

It’s not that the permitting standards of these states are any more effective in screening out dangerous applicants. It’s that concealed carry permits in those states are treated as the exclusive domain of the wealthy and the connected. The idea that “common” people would have the same rights simply offends the ruling elite’s sense of entitlement.

A robust interstate carry regime would also show the residents of those states what the rest of the country has known for decades, which is that law-abiding people carrying concealed handguns do not cause the mayhem that gun control advocates pretend follow firearms wherever they go. In fact, life goes on as usual, just with more freedom and protection for the lawfully armed and more reason for the bad guys to think twice.

The NRA commends Sen. Cornyn for his leadership in this crucial effort and looks forward to the day when the Second Amendment right to bear arms applies to all Americans in every state of the nation.