Not with a bang, with a whimper

How are rights lost? As a rule, the answer is, “In much the same manner as they are won.” Rarely do free societies abandon their liberties in a swoop. Instead, they let them go over time—slowly, subtly, even imperceptibly. Whatever the movies might imply, it is complacency—not shock—that marks the disintegration of once-cherished freedoms. With exquisite precision, the walls are dismantled piece by piece, so that by the time the final brick is removed, there is little surprise to accompany the milestone.

Should Americans lose their Second Amendment-protected rights, it will almost certainly be by dint of this hidden and unlovely process. As a native of Great Britain, I am often asked why the British were so quiet back in 1997, the year their government summarily banned all handguns. (And I do mean all: So complete is the prohibition that the UK’s Olympic shooting team now has to train in France.) “Why,” curious Americans like to inquire, “didn’t anybody do something?”

The answer is elementary: Because the British were at the end of a long century of harsh restrictions, and the citizens had grown quietly accustomed to the infringement of their rights. It is true that the handgun ban was popular; the few protests that were staged that year were small in size and short in length. But it is also true that the citizenry was witnessing the final assault in a long and dulling series. Step by step, the attitudes of the people had been reshaped and transmuted, such that by the time the coup de grace was inflicted, they didn’t know—or care—what they were losing.

Before 1903, there were no gun laws to speak of in the UK. (Readers of a literary bent will recall that Sherlock Holmes frequently accosts passers-by on the streets of London and asks to borrow their pistols.) By 1997, they were manifold. In the interim, a culture was lost.

To review the relevant history is to notice that there was no obvious turning point in the history of British gun control—no dramatic hinge on which the eventual collapse could be hung. Every decade, things just got worse, until eventually there was no road left to travel. In 1903, the British government broke with history and required those who intended to purchase pistols to obtain permission from the police before doing so. In 1920, the right to keep and bear arms—which had been protected within the British constitutional order since 1689—was relegated to a privilege, and the police and the home secretary were accorded control over who was permitted to exercise it. In 1937, the police were granted more power to decide who was eligible for a firearms certificate, and, disgracefully, “self-defense” was removed from the list of acceptable justifications. In 1968, standard long-barreled shotguns were added to the certification regime. In 1988, a national gun registry was introduced and all semi-automatic rifles and pump-action shotguns were prohibited. In 1997, the parliament banned all handguns, including .22s. In 2006, it added airsoft replicas to the list of heavily regulated items. Currently, the British government is debating whether the citizenry should be prevented from owning kitchen knives.

Speaking before the British parliament in 1775, Edmund Burke noted that in America a “love of freedom” was “the predominating feature which marks and distinguishes the whole”—and to a greater extent than in England. “In other countries,” Burke observed, “the people, more simple, and of a less mercurial cast, judge of an ill principle in government only by an actual grievance.” Americans, by contrast, “anticipate the evil, and judge of the pressure of the grievance by the badness of the principle. They augur misgovernment at a distance; and snuff the approach of tyranny in every tainted breeze.” Or, put another way: Americans tend to see problems coming, even if they’re not yet being hurt.

For example, a man might be keen to avoid becoming a gambling addict or hope to remain faithful to his wife. That he knows he will eventually be tempted by his “lower-order desires”—say, by a blackjack table or by a pretty woman—is beside the point; in an attempt to ensure that he does not give in, he establishes a set of rules for himself, and he insists upon living by it even when he is being seduced.

As Burke implied, cultures can also follow this route. Indeed, in a certain sense, this is what constitutions are for—to ensure that rights are “incorporated with the national sentiment,” as Thomas Jefferson put it, and to remind citizenries that might be righteously angry or legitimately scared that there are certain political values that transcend the here and now. Thus it can be simultaneously true that a) the British people are not bothered that they have given up their right to keep and bear arms because they slowly lost their desire to keep it; and that b) this state of gradual indifference is to be assiduously avoided by others. Human history is littered with great civilizations that have gone down the tubes to raucous laughter and the clink of the cocktail glass. Did the euphoria render their eventual fate less tragic?

Which is to say that as the man who wishes to keep his life intact would do well to avoid ever trying drugs, the man who believes that the right to keep and bear arms is crucial to a free country would not permit anything whatsoever to undermine it. As should be clear to anyone who has been following the American gun control debate of late, the step-by-step process that laid waste to the rights of the British serves as a model for this country’s prohibitionists, too.

Consider, if you will, the raw speed with which so-called “progressives” move from feting “sensible compromise” to decrying “irresponsible loopholes.” Notice how swiftly today’s “exceptions” become tomorrow’s “problems.” Witness how cynically “We just want x and no more” becomes “We already have x, so we need more.” In a matter of years, “We need to prohibit machine guns,” turned into, “We need to regulate anything that looks like a machine gun,” just as in California, “We need background checks for gun sales,” has become, “We need background checks for ammunition sales.” Absent a motivating principle that keeps the government at the top, all slopes are liable to become slippery. Had the 1994 “assault weapons ban” not been such an obvious failure—and had there been no sunset clause to guarantee its automatic expiry—we’d now be hearing calls to expand its purview: “Well we already banned the AR-15, so why not all semi-automatic firearms?”

There is a good reason that President Barack Obama flits so casually between calling for “modest reforms” and praising Australia’s confiscatory regime: For him, both are steps on the same continuum. Thus it is that anti-gun figures who have been charged with selling this week’s restrictions so often ask in frustration, “Why do you need a gun at all?” Thus it is that politicians who claim no ulterior motives are fond of slamming District of Columbia v. Heller. Thus it is that celebrities who pretend to support the Second Amendment so often slip into snark about the anatomical insecurity of gun owners. There’s a long game being played here.

As the history of government shows, regulations beget regulations, and restrictions beget restrictions. Or: If you want to avoid being eaten by the bear, don’t let it catch you in the first place. Had the British insisted that their rights remain rights, their certification regime would never have existed. If their certification regime had never existed, it couldn’t have been subjected to arbitrary rules or turned cynically into a reliable source of revenue and power. And had those arbitrary rules been cut off at the pass, there would have been fewer people shrugging their shoulders when the project was completed in 1997. The mistake, as usual, was to open the door a little bit.

The good news for Americans is that, with a little vigilance and a lot of hard work, they can avoid their cousins’ fate. It is easier to keep countries free than to restore their freedom once lost, and the United States remains a remarkably free place. (Consider how often critics of America say, “It’s the only country in the world in which ...”)

In recent years, the American Left has attempted to shame those who take a zero-tolerance view toward losing their liberties: In the fashionable parlance, such people are “obstructionists” and “zealots”—the “party of no.” But there is no shame in being adamant in defense of elemental individual rights, nor any villainy in refusing to dilute one’s chances at maintaining the existing constitutional order. If one believes, as I do, that the right to keep and bear arms is rivaled only by the freedom of speech as a statement of American principle, its unyielding protection becomes imperative.

And that, ultimately, means saying “No.” We know what happens when we don’t.

Charles C.W. Cooke is the editor of National Review Online. 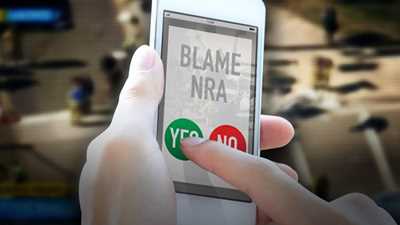