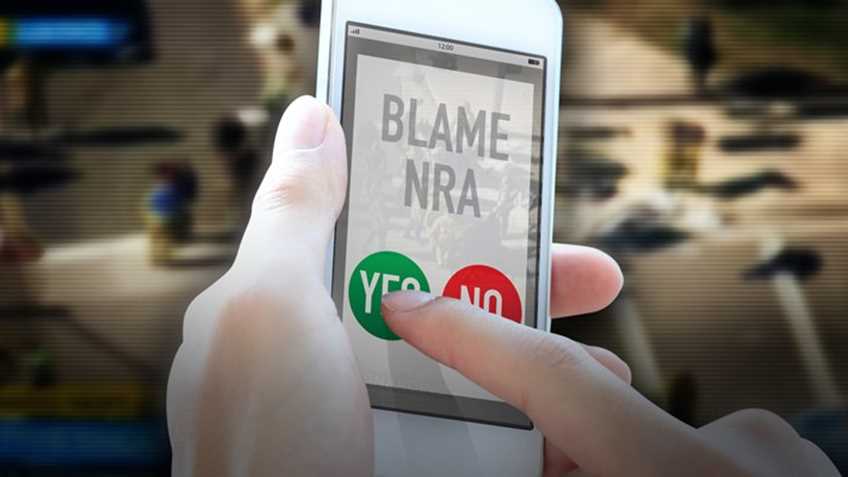 A new “watchlist” is ruffling feathers in the academic community, with critics calling it “Orwellian,” “grotesque,” “an assault on academic freedom,” and even “the right’s new McCarythyism.”

Oh, we’ve been there, too. NRA has long warned of the dangers of using secret government blacklists to deny people their Second Amendment rights without due process, transparency, or oversight.

Gun control advocates (including the Obama White House), on the other hand, believe the use of black lists to curtail Second Amendment rights is a “common sense step.” They also argue that the government should run a background check any time a lawfully owned firearm changes hands, even between neighbors, friends, and relatives. It’s a “no-brainer,” they’ll tell you.

But watchlists and background checks are not so popular with Obama and his fans in other contexts.

When used to screen out job applicants with criminal histories, for example, background checks are said to be discriminatory, even if the same hiring standards apply to all. It’s not “common sense,” apparently, to favor a law-abiding person to handle a business’s merchandise or money over someone who has recently been convicted of fraud or theft.

And it’s REALLY not common sense, according to a growing roster of anguished media accounts, to aggregate a list of online news stories about academics who publicly espouse certain political points of view, as in the case of the recently launched “Professor Watchlist,” a project of Turning Point USA.

As described on its website, “This watchlist is an aggregated list of pre-existing news stories that were published by a variety of news organizations.” Its editors will “accept tips for new additions on our website,” but will “only publish profiles on incidents that have already been reported by a credible source.” They also state that they “will continue to fight for free speech and the right for professors to say whatever they wish” but that they believe “students, parents, and alumni deserve to know the specific incidents and names of professors that advance a radical agenda in lecture halls.”

The site is searchable by professor name and employing institution. It is said currently to contain about 200 entries and includes stock photographs of the listed academics, summaries of their purportedly “radical” statements, and links to the underlying sources. The website does not suggest how browsers should use its information, nor advocate for any specific action against the listed individuals.

One entry, for example, concerns Alvin Lee, a human resources training specialist at Purdue University. According to the linked story from The College Fix website, Lee teaches a Management 301 course in which he labels various phrases as “microaggressions” and dismisses the idea of a meritocracy.  The phrases he subjects to criticism include asking a person where he or she is from, suggesting “[e]veryone can succeed in society if they work hard enough, “ and believing “the most qualified person should get the job.”

Several of the entries on the watchlist specifically mentioned the professors’ statements about NRA and its members.

James Pierce, an adjunct professor at Southern State Community College, is cited for a Facebook post in which he wrote, “Look, there’s only one solution. A bunch of us anti-gun types are going to have to arm ourselves, storm the NRA headquarters in Fairfax, VA, and make sure there are no survivors.”

Erik Loomis, a history professor at the University of Rhode Island, is singled out for a series of anti-NRA tweets in which he blamed NRA for the Sandy Hook Elementary School tragedy. “I want Wayne LaPierre’s head on a stick,” he wrote. He also claimed “the National Rifle Association has murdered some more children” and asked if NRA membership could count as “dues contributing to a terrorist organization?”

Journalism professor David Guth, of the University of Kansas, earned his spot on the list with his own tweet after another high profile mass murder. “The blood is on the hands of the #NRA,” he wrote. “Next time, let it be YOUR sons and daughters. Shame on you.” When representatives of the Campus Reform website later asked Guth about the tweet, he acknowledged writing it and expressed no remorse. “I do not regret that Tweet,” Guth stated. “I don't take it back one bit.”

College is of course a very expensive proposition these days. Parents and potential students have to weigh a multitude of factors in choosing the right institution for their needs. And alumni are perpetually solicited for money to promote the values and educational programs of their former schools. The Professor Watchlist could be considered one more data point for decision-making in these circumstances. One could even think of it as an informal background check on those tasked with influencing the minds and values of America’s rising generation of adults.

But despite inapt comparisons to 1984 and McCarthyism, the effort does not employ the heavy hand of government coercion or official disapproval. It is distinguishable, in that regard, from such efforts as the infamous “Rightwing Extremism” report issued by Barack Obama’s Department of Homeland Security. That report indicated that mainstream and widespread political views, such as opposition to gun control and concern over illegal immigration, were contributing to a rise in “radicalization” and “recruitment” among antigovernment groups. This activity, DHS warned, could “result in confrontations between such groups and government authorities” and “lead to the potential emergence of terrorist groups or lone wolf extremists capable of carrying out violent attacks.” It’s also distinguishable from the government-maintained Terrorist Watchlist and No-Fly List at the center of various gun control proposals.

The principal behind the private non-profit Turning Point USA is 23-year-old political activist Charlie Kirk. Explaining the motivation behind the watchlist, Kirk stated, “Everyday I hear stories about professors who attack and target conservatives, promote liberal propaganda, and use their position of power to advance liberal agendas in their classroom.” He continued, “Turning Point USA is saying enough is enough.  It’s time we expose these professors.”

And, after all, isn’t exposure of his or her ideas what every principled and ambitious academic seeks?

In any case, private groups like the Southern Poverty Law Center (SPLC) have been doing similar things for years, appointing themselves curators of this or that list of groups or people who don’t meet their approval for one reason or another. SPLC, for example, maintains its “Extremist Files,” which in some cases include groups that do not advocate violence or lawlessness but which have political or cultural views that diverge from those of the SPLC. Far from being decried by the mainstream press as Orwellian or McCarthyist, however, SPLC is often cited as if it were an authority on the subject of extremism.

Whatever one might think of Turning Point USA’s efforts, it’s hard not to detect more than a hint of hypocrisy amongst an academy and press that revel in pointing condemning fingers at others but shudder with indignant horror when the spotlight is turned on those with whom they identify.