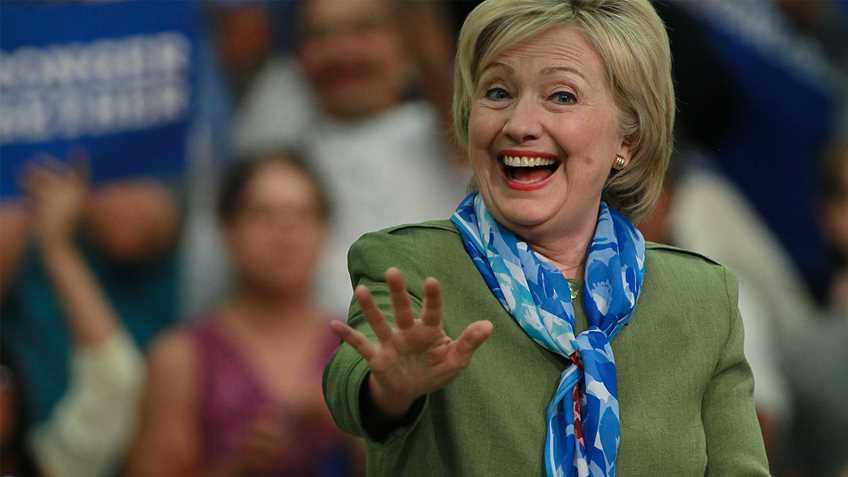 Last weekend, Democratic Party presidential nominee Hillary Clinton appeared on Fox News Sunday with Chris Wallace, where she was asked about the Second Amendment, the Supreme Court’s decision in District of Columbia v. Heller, and whether court decisions constitute precedent that should be respected.

Clinton answered, or did she? Here’s the exchange between Wallace and Clinton, beginning at 4:05 in this video:

Wallace: At a fundraiser last year, you said this: “The Supreme Court is wrong on the Second Amendment.” Now, in the 2008 Heller case, the Court said that there is a constitutional, individual right to bear arms. What’s wrong with that?

Clinton: Well, I think what the Court said about there being an individual right is in line with constitutional thinking and, I said in the [Democratic Party National] convention, I’m not looking to repeal the Second Amendment, I’m not looking to take people’s guns away. But I am looking for more support for the reasonable efforts that need to be undertaken to keep guns out of the wrong hands.

Wallace: And the Second Amendment includes an individual right to bear arms.

Clinton: Yes, but that right, like every other of our rights—our First Amendment rights, every right that we have—is open to and even subject to reasonable regulations . . .

[Note: Clinton currently advocates banning the AR-15 and other semi-automatic firearms that gun control supporters call “assault weapons,” banning any firearm magazine that can hold more than 10 rounds, mandatory background checks on all gun transfers, prohibiting the possession of firearms by people mistakenly placed on the TSA “no fly” list, and repealing the law that protects firearm manufacturers against lawsuits seeking to hold them financially responsible for the acts of criminals.]

Wallace: I just want to pursue this a little bit, because Heller—Justice [Antonin] Scalia—he said that the right to bear arms is reasonably limited. He left the door open to regulation. If you’re elected president, you’re going to appoint the ninth Supreme Court justice.

Wallace: Are you saying you do not want to see the Heller decision, the individual right to bear arms, overturned?

Clinton: No, I don’t, but here’s what I do want, and I want to be very clear about this. I want the Congress to step up and do its job. I want to get out of the horrible cycle we’re in, where we go and mourn dozens, hundreds, thousands of people killed by gun violence. Everybody says, “oh, let’s pray, let’s, you know, send our hearts and our feelings,” and then nothing happens. We’re better than this. The gun lobby intimidates elected officials. The vast majority of Americans, including gun owners, support the kind of common sense reforms that I’m proposing.

Wallace then questioned Clinton about her opinion that the president has the constitutional power to rewrite immigration law through executive action. Wallace asked, “Aren’t you changing the law? Aren’t you writing the law?”

Clinton began answering relative to immigration, but quickly expanded her answer to relate to court decisions on other issues.

Clinton: No, because here’s what I think: The Supreme Court has sent back for trial the challenges to the president’s authority to take categories of people and remove the threat of deportation.

Wallace: And as president, you would be able to name the (ninth) justice who could break the tie.

Clinton: . . . That is true, that I hope that I will have that chance, because it’s not just that. It’s [the Supreme Court’s decision in] Citizens United [which removed restrictions on political advocacy by groups like the NRA]. It’s a lot of things that I think the current Court got wrong. Got wrong, respectfully, for our democracy.

Wallace: So you would like to see all those things changed with your Supreme Court justice.

Clinton: Well, whoever the next president is will get to appoint at least one, maybe more Supreme Court justices, and there are a lot of decisions that I approve of that this Court has made. First and foremost, marriage equality. But there are decisions that I do think, when taken to their natural conclusion, have hurt our democracy, undermined our economy.

Wallace: But what about [legal] precedent?

Clinton: The precedent is absolutely in line. You know, I taught law. I’m a [unintelligible] lawyer. I know that precedent is something that you look to. But I also know that courts can take a look at precedent and determine that maybe they weren’t right the first time.

Unfortunately, Clinton never said why she believes “The Supreme Court is wrong on the Second Amendment,” and Wallace let her get away with it. Whether anyone will believe that she considers the Second Amendment to protect an individual right is doubtful. Not only do her past statements about gun control indicate otherwise, it appears that many Americans don’t believe Clinton on just about anything. The latest CNN poll found that that 68 percent of registered voters think that Clinton is not “honest and trustworthy,” and on Monday the Washington Post Fact Checker gave Clinton “Four Pinocchios” for claiming that she has been truthful with the FBI and the American people about her private email server and her mishandling of classified information.

Clinton probably got closest to the truth when she said that she disagrees with some court decisions, and that courts can reverse earlier decisions. If so, gun owners know which ones she had in mind, Heller and McDonald v. Chicago, which applied the Heller ruling nationwide.