FAIRFAX, Va. -- The National Rifle Association applauds the West Virginia state legislature for passing HB 4145, a permitless concealed carry bill that recognizes the Second Amendment rights of law-abiding individuals while strengthening penalties for those who break the law. The bill now heads to Gov. Earl Ray Tomblin’s desk, who has said he will veto, as he did a similar bill last year. The bill will then return to the legislature where a veto override is possible.

“The state legislature made an important vote on behalf of law-abiding gun owners in West Virginia today. It confirmed the people’s right to defend themselves in the manner they see fit,” said Dakota Moore, West Virginia liaison for the National Rifle Association. “The governor has said he will veto this piece of legislation, but our fight doesn’t end there. The NRA and our West Virginia members will continue to make the will of the people known to the West Virginia legislature. We look forward to the day when this bill becomes law with or without the governor’s signature.”

HB 4145 allows law-abiding adults to carry their firearms in the manner that best suits their needs. It strengthens penalties for anyone caught with an illegal firearm. And, it recognizes the self-defense needs of responsible, trained individuals between the ages of 18 and 21. If the bill becomes law, these adults, who are able to serve in our military and hold elected office, will be able to apply for a permit after undergoing training.

Tomblin has five days, not including Sunday, to act on the bill after it lands on his desk. If he vetoes, as he has indicated, the legislation will return to the legislature with enough time for an override.

“This is a strong piece of legislation that will make the state a safer place,” concluded Moore. 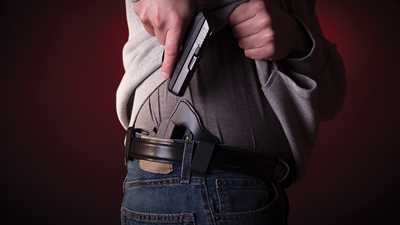