Last week, law professor and Washington Post blogger Eugene Volokh, exposed how the District Attorney’s Office in Nassau County, New York, was unconstitutionally prohibiting its prosecutors from possessing handguns, even in their homes. We registered our disapproval as well. On Wednesday, mere days after the story broke, Prof. Volokh reported that the policy had been rescinded. Well, mostly rescinded.

Prof. Volokh’s Wednesday post includes a copy of a memo issued by Albert Teichman, Chief Assistant District Attorney for Nassau County. The memo notes the policy was enacted in 2006, and predates the tenure of current Nassau County Acting District Attorney, Madeline Singas. Although the memo doesn’t say so, it would also mean the policy predated the Supreme Court’s pivotal holdings in District of Columbia v. Heller and McDonald v. Chicago. Of course, those cases should be well-known to any lawyer, especially one working in law enforcement, so that does not excuse the fact that the policy persisted, even when it was clearly at odds with the high court’s statements on the Second Amendment.

The memo claims, unlike the explanation provided to Prof. Volokh when he inquired about the policy, that the restriction was enacted “to prevent friendly fire tragedies like those that have occurred in recent years in Nassau County and neighboring jurisdictions.” It then embarks on a litany of incidents occurring between 2006 and 2011 in which law enforcement officers were killed by other law enforcement officers in the New York City Metropolitan area.  None of the incidents involved prosecutors or other officials who do not routinely carry as part of their law enforcement duties.

The memo concludes, “Upon review, the public safety interests served by the policy can be substantially effectuated though a less-restrictive means that does not preclude ADAs from owning handguns, but strictly prohibits work-related possession and use.” It goes on to recommend that assistant district attorneys be “strictly prohibited from carrying or possessing a weapon any time they are working … without the express written permission of the District Attorney or the District Attorney’s authorized designee.” Violations, it states, should be punishable by termination.

A follow-up memo, also dated Sept. 30, shows the policy being enacted “immediately” and superseding any previous policy. It also states, “Assistant District Attorneys are permitted to own and possess a legally registered handgun in their homes or for legally permitted activity unrelated to their employment and workplace.” Such employees are “encouraged” to take a firearm safety course. They are also required to provide copies of their “licensure and registration documentation to the DA’s office.”

We took Acting District Attorney Singas strongly to task in our original remarks, as she is ultimately responsible for the policies of her office, whether she originally implemented them or not. We now credit her, however, with taking positive and expeditious steps to correct an obviously untenable situation. We certainly agree with her office’s recommendation that DAs who choose to own handguns take a firearm safety course, and NRA’s network of certified trainers – the finest in the nation – stand ready to assist in that regard. While we believe that any prosecutor lawfully able to do so should also have the option of remaining armed while operating their own private automobiles, we are glad to know that they will now be able to own and use handguns on their own time and for their own purposes.

More troubling is the office’s continued insistence that “[m]any neighboring jurisdictions impose handgun restrictions on Assistant District Attorneys.” We checked the hiring websites for the District Attorney’s Offices of Bronx, Kings, New York, Queens, and Richmond Counties.  None of them mentioned any such requirements. Clearly, however, the use of public employment or civil service as a means of depriving individuals of their Second Amendment rights while they are at home or on their own time is a problem in any context. Public employees subjected to any such a blanket policy are encouraged to contact the NRA with their stories.

The original author of the Nassau County policy is former District Attorney and current U.S. Rep. Kathleen Rice (D-NY). Rice told the media through a spokesperson that assistant district attorneys “shouldn’t be walking around armed” when dealing with victims, witnesses, and defendants. Why she believed that necessitated banning prosecutors from owing handguns at home, however, is not explained. It suggests deficiencies not just in her grasp of the U.S. Constitution but in her legal drafting ability. Her NRA-PVF

F-rating, meanwhile, indicates she takes a dim view of firearm ownership in general. 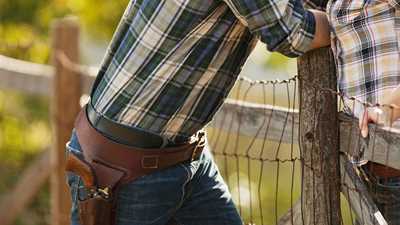