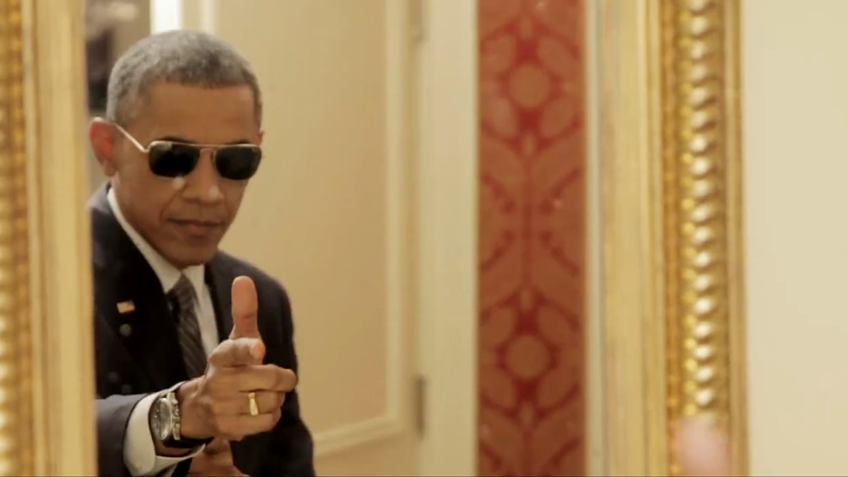 Attention overbearing public school administrators: you might want to remove any portraits of the 44th U.S. president hanging on your walls. In a recent Affordable Care Act promotional video produced for the website Buzzfeed, President Barack Obama uses his index finger and thumb to form a finger gun and aim it at the viewer. Apparently, the commander-in-chief has not been briefed on the supposedly anti-social, threatening, and disruptive nature of this gesture, so we are here to help.

The video, entitled, “Things Everybody Does But Doesn’t Talk About,” features Obama engaging in various silly activities aimed at portraying him as a regular person, in order to promote his healthcare program. At the beginning of the video, the president is positioned in front of a mirror. After some prolonged mugging, he dons a pair of sunglasses and wields a finger gun at the camera, as if showing off his best secret agent impression.

Unfortunately, the harmless fun the President of the United States is having in the video is, when indulged in by elementary school students, all too often treated by oppressive school officials as a violent offense demanding punishment. Mere weeks after the video’s premiere, a Colorado first-grader was suspended from school for a similar gesture. “Of course I think he was playing,” his father told a reporter. “What six-year-old doesn’t play cops and robbers, or cowboys and Indians?” Indeed, the White House would surely agree, what guy of any age?

Back in November, 10-year-old Nickolas Taylor of Milford, Mass. was suspended for two days from his fifth grade class at Stacy Middle School after he cut a line in the cafeteria at lunch while brandishing an imaginary finger “ray gun.” The incident prompted the Taylor family to explore home schooling.

In 2013, 8-year-old Jordan Bennett was suspended from Harmony Community School in Harmony, Fla. for forming a finger gun during a game of cops and robbers with a friend. In an interview with local ABC-affiliate WFTV, Jordan’s mother, Bonnie Bennett, told a reporter, “He had nothing in his hand. It was a finger gun, a pretend gun… He didn't threaten violence. He didn't utter words that were inappropriate. He made a sound and used his fingers and that was it.”

Perhaps most appalling, in 2012, the parents of a 3-year-old deaf preschooler named Hunter Spanjer were told by school officials in Grand Island, Neb., that Hunter’s sign language name was inappropriate for school. Hunter signs his name by extending and crossing his index and middle fingers, which produces an appearance akin to that of a finger gun. The school system eventually backed down after media coverage of the incident provoked a public outcry, and the American Civil Liberties Union and the National Association of the Deaf got involved.

It is incidents like these that have prompted NRA to endorse state legislation protecting children from the overwrought enforcement of zero-tolerance “safe school” policies. In 2014, Florida was the first state to pass legislation some referred to as “The Right to Be a Kid Act” or the “Pop-tart Bill” (after an incident where a Maryland student was punished for chewing a breakfast pastry into the shape his teacher thought resembled a gun). The law makes clear that students are not to face disciplinary action for harmless behavior “[s]imulating a firearm or weapon while playing” or for “wearing clothing or accessories that depict a firearm or weapon or express an opinion regarding … the Second Amendment ….” The bill outlines a list of specific non-punishable conduct, including, “[u]sing a finger or hand to simulate a firearm or weapon.” Since becoming law in Florida, lawmakers in Oklahoma, Texas, and Nevada have pursued similar legislation.

It’s not often that the NRA and this president find common ground. We apparently agree, however, that imaginary gun gestures made in good fun or during imaginative play are perfectly normal and acceptable behavior, even for the leader of the free world in a video he uses to promote his public policies. Hopefully, the president’s example will prompt overzealous school administrators to think twice before needlessly punishing a child who follows his lead. 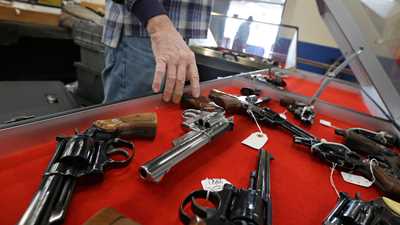