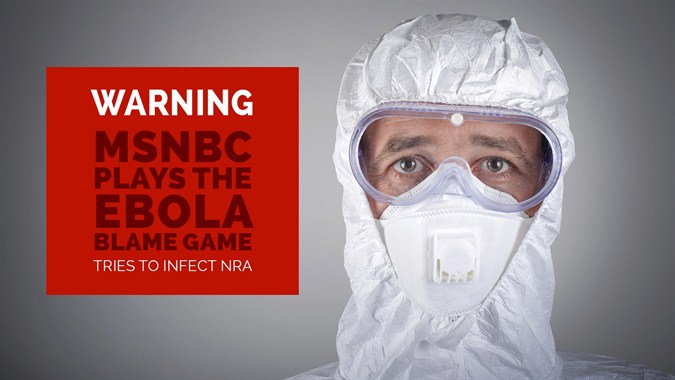 In what appears to be an attempt to upstage Louis Farrakhan’s assertion that Ebola is an invented “race-targeting weapon,” MSNBC and gun control organization States United are pointing the finger at NRA for the ongoing public health crisis.  According to their “logic,” NRA’s opposition to Obama’s nomination of anti-gun activist Vivek Murthy as Surgeon General has exacerbated the Ebola crisis, as Americans supposedly have nowhere else to turn for reliable information on the outbreak.

In an article titled, “How the NRA is making the Ebola crisis worse,” MSNBC lamented, “thanks to NRA power and Senate cowardice, we are left with no surgeon general during a time when, we not only have Ebola arriving on our shores, but are also dealing with the mysterious Enterovirus, which is infecting and contributing to the deaths of children in the U.S.”  Likewise, States United tweeted, “Ebola now in the US. Surgeon General should be leading the way on public health education but NRA stalled nomination. No outrage?”

Of course, these organizations failed to acknowledge that the president -- who rarely misses a chance to put politics first with his political appointments -- could have chosen a less ideologically-motivated figure for the job.  Perhaps even one that respects the American people’s fundamental right-to-self-defense.

NRA’s opposition to Vivek Murthy’s nomination is well-founded.  Back in February, NRA sent a letter to the Senate Majority Leader Harry Reid (D-Nev.) and Senate Minority Leader Mitch McConnell (R-Ky.) outlining our concerns.  The letter explained in detail Murthy’s political activism on behalf of Obama’s presidential campaigns and on gun control.  Through the organization he founded, Doctors for America (previously Doctors for Obama), Murthy advocated for various proposals to restrict Second Amendment rights, purportedly in the name of “public health.”  Murthy signed letters from the organization supporting mandatory licensing, a semi-auto ban, mandatory waiting periods, plus further involvement from the federal government in public health gun control efforts.  In some cases, Murthy was pushing as “evidence based” proposals that even Bloomberg surrogate Shannon Watts now admits wouldn’t make much of a difference.

MSNBC’s and States United’s outlandish comments are simply one more example showing that gun control supporters will use any human tragedy to advance their anti-gun and anti-NRA agenda, no matter how ridiculous and desperate it reveals them to be.  At any rate, if Dr. Murthy really does have the cure for Ebola or anything else useful to say on the matter, we’re pretty sure the president’s adoring press corps would be happy to give him plenty of coverage to air his “expertise.”

Kansas: Amended Concealed Carry Legislation Passed out of the House

Today, the Kansas House passed House Bill 2058 through a bipartisan 85 to 38 vote after including the “Owens Amendment” yesterday​.

MSNBC Reporter Unwittingly Discovers the Importance of the Right to Keep and Bear Arms
MSNBC’s Ali Velshi: ‘Nobody in America Has Suggested Banning Any Guns’ (They Have)
MSNBC's Tur and Panel Lament No New Gun Control in 2017
Surgeon general is removed by Trump administration