We reckon that anti-gunners will do just about anything to try to trick people into thinking that gun sales are tanking and that Americans therefore are ready to support the full array of restrictions envisioned by our "transform the United States of America" president, Barack Obama.

Yesterday, Bloomberg Businessweek featured an article by Kyle Stock that juggled monthly numbers of firearm-related checks conducted by the National Instant Criminal Background System (NICS) to make it appear that, as Stock put it, "Americans, apparently, may finally have enough guns and ammunition."  Stock explained, "FBI background checks, a leading indicator of firearm demand, have also been dropping. Federal applications to make a gun purchase last month were one-third fewer (sic) than a year ago."

Today, CNN published a similar item. Titled "Gun Sales Are Plunging," the article, by Aaron Smith, says "Background checks by the Federal Bureau of Investigation, considered the most accurate means of tracking gun sales, plunged by a third in January compared to the year before." 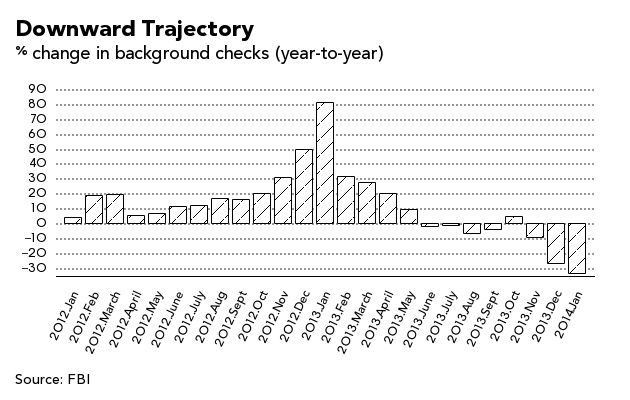 Aside from the fact that the "source" of the chart is Bloomberg, not the FBI, the chart makes it look as though gun purchases have declined in seven of the last eight months. Here are the FBI's numbers. Here's how Bloomberg juggled them. Notwithstanding the chart's vague "year-to-year" label, what it is really showing is how the number of NICS checks for each month shown compares to the number of checks in the same month a year earlier. For example, on the far right-hand side of the chart, the number of NICS checks in January 2014 was 33 percent ("one-third") lower than the number in January 2013. Doing it this way makes it look like gun purchases have been tanking since June 2013.

Now let's use the same numbers without a trick designed to make people believe gun sales are declining. 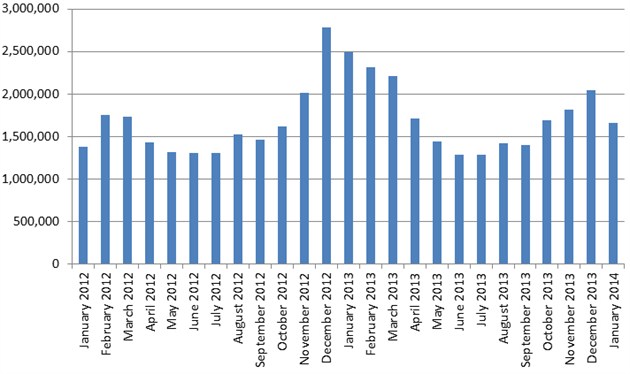 What this shows is not only that Americans are buying a lot of guns, but also that recent numbers of NICS checks have been slightly higher than in 2012, but are lower than 2013 numbers only because 2013 numbers were extraordinarily high.

Now let's look at a five-year term trend. The last few months of NICS checks are higher, relative to everything except the surge months last year.

Like Mark Twain, attributing it to British Prime Minister Benjamin Disraeli, said, "there are lies, damned lies, and statistics."  Especially those told by gun control supporters.

Gearing Up for 2014 Elections

Bloomberg and His Billions Just Won’t Go Away