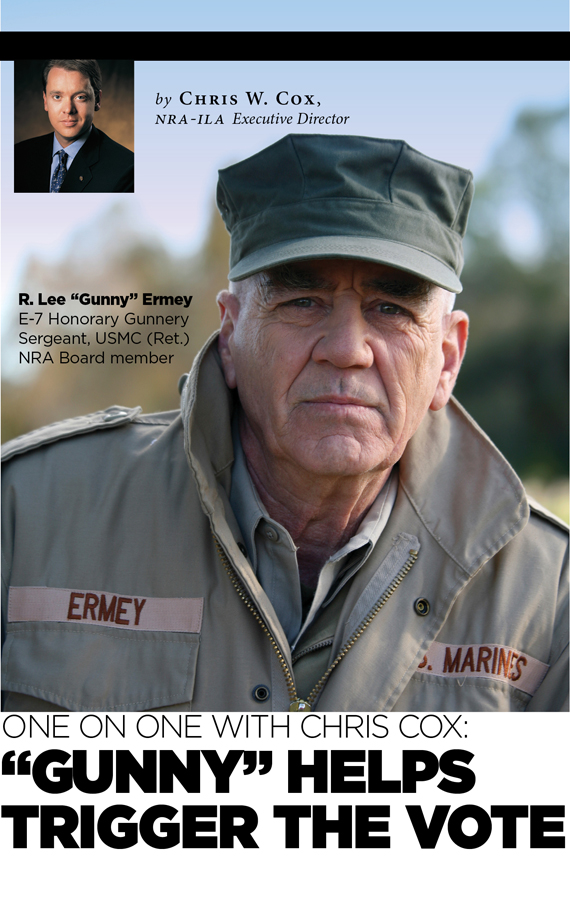 Most know him simply as "Gunny," but NRA Board member R. Lee Ermey is many things. The former Marine Corps drill instructor became a film star after his medical retirement from the Corps in 1972. Most remember his most notable role as Gunnery Sergeant Hartman in the film "Full Metal Jacket," but Ermey has starred in dozens of movies and commercials. He is the spokesman for Glock, SOG Knives and Tools and Victory Motorcycles, and also finds the time to serve as an active member of the NRA Board of Directors. Gunny was kind enough to donate his time to the recent production of a new ad for The NRA Freedom Action Foundation's Trigger the Vote campaign, so I took the opportunity to catch up with him on this important effort.

Cox: Gunny, it's a pleasure to visit with you. Thanks so much for donating your time to the new voter registration ad. It really came out well.

Gunny: It should be a great one. I always say, "If it's not funny, it's not worth the money." The mark of a very good commercial is that it's so funny that people will seek it out, find it online, and email it to their buddies so they can share a chuckle.

Cox: I'm sure it will really take off when we release it. NRA members are big fans of you and your career, but all of this really started with your military career in the Marine Corps. Tell me a little about serving as a drill instructor.

Gunny: The job is a "golden tour" and very few people qualify. When I re-enlisted, my goal was to become one, because I was so impressed by my own drill instructor. He was my role model then and still is today. It's 18 hours a day, seven days a week, and it's the most fulfilling job of your life. I like to think I was a pretty good one.

Cox: That led to your starring role as the gunnery sergeant in "Full Metal Jacket," the role for which many people remember you the most. Tell us about how you got that role.

Gunny: That was actually film number five for me. I was struggling, trying to make things happen. When Stanley Kubrick called me up to talk about the novel that the screenplay was based on, I told him I found a lot of nonsense in it. I accepted a job as technical advisor for the film, but it was my goal to score the role as Gunnery Sergeant Hartman. And persistence paid off. The Marine Corps doesn't teach us to fail. The Marine Corps has never allowed us to accept failure as an option. If you fail in the Marine Corps, you're probably dead.

Cox: You've become very popular as a spokesman and star. What other projects are you working on?

Gunny: I just did a few days on a new movie with Vince Vaughn, Ben Stiller and Jonah Hill. The title is "Neighborhood Watch," and the script was hilarious. It was a pleasure to work with these guys. We threw the script away and just had fun with the thing. It's a pleasure to work with other actors who are witty enough to keep up. I have very little in common with most fellow actors, though. Charlton Heston, on the other hand, was the reason I got involved in this issue. I first met him about 10 years ago. We really hit it off, and he truly inspired me. He's a great role model for anybody and he is sorely missed.

Cox: You recently joined the NRA Board of Directors, and we're glad to have you.

Gunny: My objective is always to put myself into a position of leadership on issues I care about. I don't know if I can ever dedicate as much time as Chuck did, but I am here for the NRA, and offering all I can. That's why I was happy to do the commercial.

Cox: You've gotten some heat over some of the political stands you've taken in public. Were you afraid that joining the NRA Board of Directors would hurt your popularity in the film industry?

Gunny: If that's the case, bring it on. Some things I've said have ended up on Keith Olbermann's show and I consider that a badge of honor. When he gets upset about something, it makes me happy. When it comes to politics and religion, you can't please everyone. The people on the wrong side of the fence need to do a little more research! 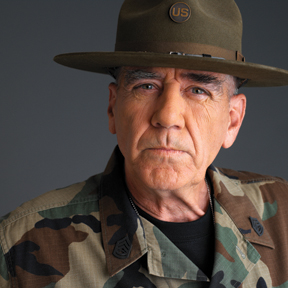 Cox: As you know, much of the successful defense of the Second Amendment takes place in the polling booth. And that means we have to constantly recruit new voters and make sure they're registered to vote. That's the focus of the ad you just filmed for our Trigger the Vote campaign. What was your motivation for volunteering?

Gunny: We need to take this country back and do it right now. I fought for this country, and now I'm watching these protesters and politicians trying to destroy this country, so I have to consider them my enemies—just politically, of course. I think it's disgusting that we have been given the right to elect our leadership in this country, and so many don't bother to vote. Our opponents are certainly focused on registering voters.

Cox: And on Election Day, those new voters need to cast an informed ballot to protect their Second Amendment rights, by voting Freedom First.

Gunny: Absolutely. I'm an independent. I vote for the person who's going to do the best job, not the party. That doesn't mean voting for obscure, third party candidates. I like the Tea Party, but my advice to independents is to work within the system and vote for a candidate who has a chance of winning. The voting booth is not the place to make a statement. That's throwing your vote away.

Cox: As you know, Chuck Norris is the Honorary Chairman of our overall voter registration campaign. Have you met him before?

Gunny: Chuck's a great guy; I've known him many years. We have the same sign on our front door—the one that says "We Don't Dial 911." I like him, he's a great American and I'd love to work with him.

Cox: We'll make that happen. Thanks again for all your support, Gunny.

Gunny: Tell everyone to go online and watch the ad; that's the best reward I can think of.

Trigger the Vote made its debut on the national political stage in the 2010 mid-term election cycle. That year's centerpiece ad, "Tough Like Chuck," starred Honorary Chairman Chuck Norris. It featured the character "Group Leader Randy" conducting a seminar on "How to Find Your Inner Norris." Randy's oddball, off-target lesson is interrupted by the arrival of none other than Chuck Norris himself, who teaches the students that the only way to be tough like Chuck is to register to vote. That ad won the top Pollie Award from the American Association of Political Consultants for Best Public Affairs Campaign of 2010.

Now, Group Leader Randy returns as a patron of a library where Gunny has taken a job as librarian. Gunny is seeking peace and quiet in his new post, and reacts to several library disturbances with uncharacteristic serenity. But Gunny then encounters a young pro-gun library patron who isn't registered to vote—and all heck breaks loose. Both ads and more can be seen on the campaign's website, www.TriggerTheVote.org.

The light-hearted nature of the Trigger the Vote campaign's ads shouldn't hide the fact that its goals are deadly serious. The Obama campaign of 2008 won largely due to newly registered voters, and four more years' worth of new voters are now on the scene. Those new voters are up for grabs in the critical 2012 election cycle, but first they have to register.

The nation is closely divided politically, and just as in past cycles, the 2012 election will see important contests decided by a handful of votes. Even the presidential race could come down to the wire like it did in 2000. Meanwhile, one major party official recently admitted to the Wall Street Journal that the party doesn't spend resources on new voter registration.

The NRA has no choice but to fill the void. Every hunter, shooter and gun owner should be registered to vote, and must then cast an informed ballot on Election Day. The NRA Political Victory Fund will be very busy this fall issuing grades and endorsements, but none of this work will matter unless Second Amendment supporters are prepared to cast their ballots in all of the key races.

That's why The NRA Freedom Action Foundation has already launched its voter registration drive. If you know anyone who isn't registered to vote, tell them to visit www.TriggerTheVote.org. They can fill out an application to register from the comfort of their own home and then drop it in the mail.

And if you want to support our critical voter registration campaign, visit www.NRAFAF.org to make a donation.

Cox: Obama's budget is a sneak attack on our Second Amendment freedoms

Turning Their Back On The Supreme Court