Mexico Drug Wars: Will Gun Owners be the Scapegoats? 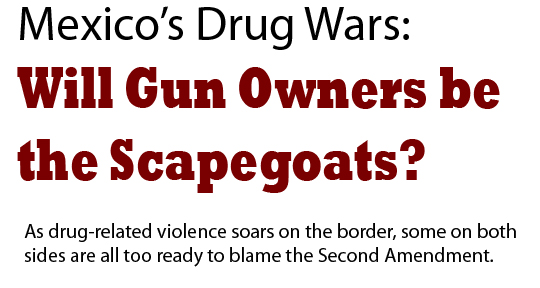 By Chris W. Cox
NRA-ILA Executive Director
When President Obama’s chief of staff, Rahm Emanuel, said, “You never want a serious crisis to go to waste,” he may have been talking about the economy, but his friends in the anti-gun movement heard him loud and clear. Now, they’ve discovered the latest crisis they can use to attack our Second Amendment rights: the explosion of violent crime committed by drug cartels in Mexico.

That’s right, Mexico. Anti-gun activists and politicians are already planning to make gun bans, gun sales restrictions and even licensing and registration a part of their “solution” to Mexico’s problems.

In a February 25 news conference announcing a wave of drug-related arrests by federal agents, he said, “There are just a few gun‑related changes that we would like to make, and among them would be to reinstitute the ban on the sale of assault weapons.”

Other officials and activists have used Mexico’s crisis as a pretext for pushing gun show restrictions, bans on .50-caliber rifles, bans on common ammunition they portray as “armor piercing” and more. 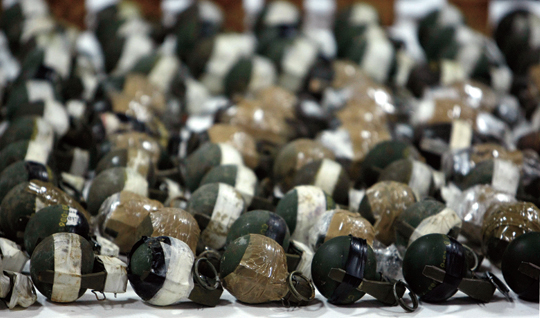 On “60 Minutes,” Holder’s Mexican counterpart, Attorney General Eduardo Medina Mora, went so far as to say, “The Second Amendment was never designed to arm criminal groups, and especially not foreign criminal groups as it is today.”

That’s right. According to some, the violence in Mexico is not the fault of the drug cartels or their American customers, nor is it the fault of decades of Mexican government corruption. No, it’s the fault of American gun owners.

The $40 billion dollar drug trade has allowed the cartels to turn what had been widespread petty corruption in Mexico into a large-scale seizure of power. The effects have been so far-reaching that the U.S. military is actively planning for the possibility of a Mexican government collapse.

Mexican President Felipe Calderon has made fighting the cartels a top priority, a courageous move considering the clout the cartels already posess.
The cartels have more power than the local governments in some areas of Mexico. They have infiltrated local police departments and corrupted local officials. Some of the cartels are so brazen that they’ve put up billboards soliciting police officers and military personnel to switch sides. With promises of better pay and guarantees of food for their families, thousands have accepted these offers.

When Mexican police and soldiers resist corruption, the ruthlessness of the cartels sometimes overwhelms them. In February, the cartels told the police chief of Ciudad Juarez that if he didn’t quit, they would kill a police officer every 48 hours. And they carried out the threat, killing five officers in 10 days until the chief resigned and left town. 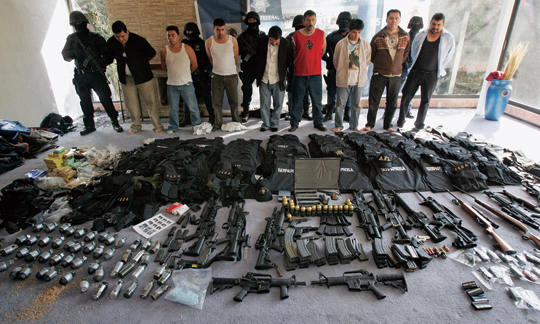 President Calderon, in an effort to counter the growing power of the cartels, has sent military units to fight the narco-terrorists. The result has been increasing levels of violence. The exchanges between the cartels and the government have become more and more like military campaigns.

Thousands have died in the past 18 months, including hundreds of police officers, military personnel and civilians. In the United States, we have long talked about a “drug war;” in Mexico, they’re actually fighting one.

In a crisis like this, there is no shortage of victims. First and foremost are the average, long-suffering citizens of Mexico who—like ordinary people anywhere—want nothing more than to work hard and raise their families in peace. The same goes for Americans in the border states, who’ve lately seen crime spill across the border, with a boom in Mexican-style kidnappings in Phoenix, and other cartel-related crimes in cities from Anchorage to Atlanta.

But on top of dealing with the spillover of crime and the threat of a destabilized nation next door, we gun owners are going to have to defend our Second Amendment rights against those who would blame us for the crime in Mexico.
As in any other gun control debate, the gun-ban groups’ case is based on the illogical idea that gun laws will stop criminals from committing violent acts.

That’s a “solution” that has never worked anywhere before. It doesn’t even work in Mexico, which has gun laws that are far stricter than ours. Mexico generally prohibits civilian possession of firearms or ammunition in calibers commonly used by the Mexican military, such as 9 mm or larger handguns, and .223 and .30-caliber rifles—all of which are widely used by private citizens in the U.S. and other countries around the world. Unauthorized possession of these arms that Mexico treats as “exclusively reserved for the use of the Army, Navy or Air Force” is punishable by up to 15 years’ imprisonment.

These laws are widely ignored. The Geneva-based Small Arms Survey estimates that of the 15 million firearms in Mexico, only about one third are registered (as required by Mexican law). And news reports on drug cartel violence often note the drug lords’ use of grenade launchers and anti-tank rockets—weaponry that isn’t available over the counter anywhere in the U.S., but is reportedly often smuggled from Guatemala. Mexico’s gun laws do not make Mexico safer. Importing Mexico’s gun laws into the United States surely won’t, either.

For some in the Mexican government, the goal is to shift the blame for Mexico’s rampant crime and violence. While that might be politically useful, it won’t solve their nation’s problems. Even a complete gun ban in the United States would not stop the cartels from arming themselves. It wouldn’t even slow them down.

What is the solution, then?

First and foremost, we must secure our border. Giving the U.S. Border Patrol and Immigration and Customs Enforcement the resources they need to do their jobs should be a top priority. NRA has a long and proud relationship with these agencies. In fact, my office at NRA Headquarters is dedicated to the memory of NRA-ILA’s first executive director, Harlon B. Carter, who served as chief of the Border Patrol and later as a regional commissioner for the Immigration and Naturalization Service.

Second, those who smuggle American guns into Mexico are fair game for the American criminal justice system.
“Straw buyers” and others who do the cartels’ dirty work in the U.S. should be identified, arrested and prosecuted. U.S. law already prohibits selling guns to non-U.S. residents, to illegal aliens and to most legal non-immigrant aliens. There are heavy penalties for selling guns for use in a violent or drug trafficking crime. Illegally exporting firearms, or even an unsuccessful smuggling conspiracy, can be punished with decades in federal prison.

Third, U.S. and Mexican authorities can, and should, cooperate to address these problems. In fact, the Bureau of Alcohol, Tobacco, Firearms and Explosives (BATFE) already has an active program called “Project Gunrunner” that targets violators of our existing laws. The program goes after these criminals with intelligence sharing, training of Mexican police and tracing of firearms in legitimate criminal investigations. We’ve been critical of some of BATFE’s other activities, but enforcing the existing laws against those who intentionally arm violent drug cartels is surely worthy of support.

Unfortunately, in some cases, even as the Mexican government calls for the U.S. to restrict the freedoms of our citizens, it refuses to fully cooperate with American authorities to investigate the source of illicit guns taken from drug traffickers.
In one case, according to the San Antonio Express-News, Mexican police seized more than 300 rifles, a half-million rounds of ammunition and shoulder-fired grenade launchers. This was the largest haul of weapons seized at the time—but weeks later,

Mexican officials still hadn’t given BATFE access to the guns’ serial numbers. Without this kind of information, investigations are slowed or stopped and the true sources of firearms used in Mexican crime may never be discovered.

The lack of cooperation includes problems within Mexico’s own government. One local police chief complained to the Express-News that he was not allowed to coordinate directly with American officials; rather, he had to go through Mexican federal authorities.

NRA applauds the Calderon government for its commitment to fighting the drug cartels. We fully support the efforts of U.S. law enforcement to cooperate with Mexican officials and hope that more cooperation from Mexican authorities will be forthcoming. We also support enforcing the U.S. laws that are already on the books, to harshly punish anyone who engages in smuggling firearms.

These are all parts of the solution to this problem, but a solution also requires the Mexican government to recognize that the war against the cartels will not be won as long as government corruption is so widespread. Nor will it be won by shifting the blame to American gun owners or American gun laws.

NRA will support action targeted at criminals, but we will not stand by as the constitutional rights of American citizens are sacrificed in a vain attempt to stop violent, international criminal enterprises from illegally arming themselves. Nor will NRA go along with gun bans, sales restrictions or gun registration schemes to appease anti-gun politicians, foreign or domestic. Mexico’s real drug war needs real solutions, not scapegoats.

A version of this article was submitted as testimony at three congressional hearings in March.