No Bullets, No Shooting! 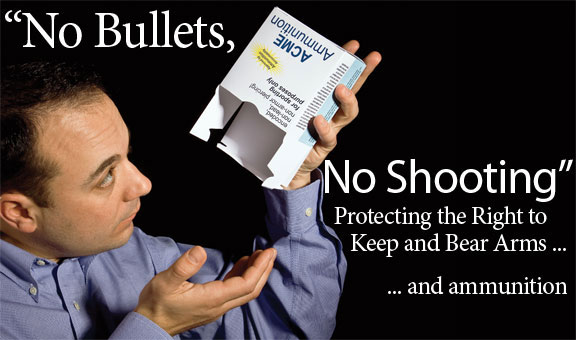 All gun owners are familiar with the 17th century maxim, "Keep your powder dry.” But if we expect to be gun owners in the 21st century, we have to update that to read, “Keep your powder—and all the rest of your ammunition—at all.” That’s because politicians who want to ban guns, but who don’t have the votes in Congress and state legislatures, are trying to achieve the same effect by banning the manufacture, importation, sale and possession of as much ammunition as possible, and severely restricting the rest.

All of these bills would prohibit the manufacture and sale of ammunition, unless the bullets and cartridge cases are marked with a code and registered to the owners in a computerized database. Most would also require gun owners to forfeit any non-coded ammunition they possess. For example, Arizonas bill says, “Beginning January 1, 2011, a private citizen or a retail vendor shall dispose of all noncoded ammunition that is owned or held by the citizen or vendor.” Tennessee’s says, “All non-coded ammunition . . . shall be disposed.” And in Pennsylvania, “An owner of ammunition . . . not encoded by the manufacturer . . . shall dispose of the ammunition.”

The point of these bills is to prevent gun owners from having ammunition for defense, practice, sport and hunting. The fact that these bills are not gun bans is a mere technicality because, in practical terms, ammo bans are gun bans.

That isn’t the end of the anti-gunners’ attacks on ammunition in the current Congress and state legislative sessions. Ammunition bans are taking almost as many legislative and regulatory forms as there are types of ammunition to outlaw.

In October, the California legislature banned center-fire ammunition containing more than trace amounts of lead, when hunting big game and coyotes in the area inhabited by the California condor. And within two months, the state’s Department of Fish and Wildlife adopted a regulation going further, banning any sort of lead ammunition when hunting any game or non-game animal in the condor’s area. Now a lead bullet ban is being pushed in Arizona, too, even though there is still no solid evidence that condors anywhere are dying because they have ingested fragments of traditional hunting bullets.

In Congress, a handful of members of the House (all rated “F” by the NRA Political Victory Fund) have introduced an “armor-piercing ammunition” bill to ban any handgun that can fire a bullet that, if fired from any rifle or handgun, could penetrate a protective vest. Given the number of rifle calibers that use the same diameter bullets as handguns, and the number of handguns that use rifle ammunition, all or virtually all handguns would be banned if this bill became law. Another bill proposes to reinstate the former Clinton Gun Ban’s prohibition on the manufacture and possession of ammunition magazines that hold more than 10 rounds.

Anti-gunners’ current focus on ammunition is unmistakable, but going after guns by going after ammunition is not a new idea. As far back as the 1930s, during the debate over national gun owner licensing and handgun registration, it was proposed to implant a small tape bearing a serial number in every bullet, and require people to register ammunition purchases with their names and fingerprints.

This bullet coding idea lay dormant until 1969, when President Lyndon B. Johnson’s National Commission on the Causes and Prevention of Violence recommended a law that would require manufacturers “to implant an identifying capsule with a distinctive number in each bullet and require firearms dealers who sell the ammunition to maintain records of the persons who buy all such numbered ammunition.”

Today, ammunition registration is back on the front burner because a company that claims to have the technology to turn the 80-year-old concept into reality is eager for profits at the expense of our rights. Calling itself “Ammunition Accountability,” the company is trying to market ammo registration by portraying itself as a “group of gun crime victims, industry representatives, law enforcement, public officials, public policy experts, and more.”

Meanwhile, another of the LBJ-era commission’s recommendations, “a system of giving each gun a number and the development of some device to imprint this number on each bullet fired from the gun”—known today as “micro-stamping”—was mandated in California at the end of 2007, to take effect in 2010, and has been proposed in several other states.

California’s law had been urged by Washington’s undisputed gun control crusader for more than 30 years, Sen. Edward Kennedy, D-Mass. And on February 7, only a week after endorsing Sen. Barack Obama, D-Ill., for president, Kennedy introduced a bill in Congress to mandate micro-stamping nationwide. Kennedy claimed that his bill “provides law enforcement with a much-needed resource in solving crimes.” But even if micro-stamping worked, it would be relevant only to new guns acquired from retail dealers, while 88 percent of guns used in crime are acquired through unregulated channels.

To say the least, Obama didn’t get Kennedy’s support only because he made the keynote speech at the Democratic Party’s 2004 national convention in Massachusetts. When it comes to ammunition and guns, Kennedy, Obama and Sen. John Kerry, D-Mass.—whom the 2004 Democratic convention nominated for president, and who has also endorsed Obama this year—are cut from the same cloth.

At the time, Obama was a state senator in Illinois, where he supported increasing federal excise taxes on guns and ammunition by 500 percent, banning compact handguns, limiting the frequency of gun purchases, banning the sale of guns (except antiques) at gun shows, charging a person with a felony offense if his gun were stolen and used in a crime, prohibiting people under age 21 from possessing guns, increasing the gun dealer licensing fee, prohibiting dealers from conducting business at gun shows or within five miles of a school or park, and banning police agencies from selling old service firearms to generate funds to buy new firearms for their officers.

From 1998 to 2001, Obama was also a director of the Joyce Foundation, the largest provider of tax-free funds to anti-gun groups and causes in this country—$19 million, including $1.5 million to the ultra-radical Violence Policy Center during Joyce’s Obama years. Obama even considered becoming Joyce’s president, according to the Boston Globe.

To be fair, I should mention that Obama’s chief rival for the 2008 Democratic nomination, Sen. Hillary Clinton, D-N.Y., has a serious anti-gun record, as well. When she was First Lady, Clinton endorsed a 25 percent tax on handguns, an increase in the federal gun dealer license fee to $2,500, registration and licensing of handguns and their owners, and registration and licensing for all new owners of rifles and shotguns.

We’re hearing the word “change” a lot in this year’s presidential campaign. But the longer I’m part of the fight for the right to arms, the more I realize that even though the details of anti-gun bills may change, their underlying concepts remain the same.

Back in 1974, Kennedy knew that banning ammunition would have the same practical effect as banning guns. On the floor of the Senate, Kennedy said that the “manufacture and sale of handguns should be terminated” and that “existing handguns should be acquired by states.” And toward that end, he urged passage of his amendment to “require the registration of every civilian-owned handgun in America,” to “establish and maintain a nationwide system to license every American who owns a handgun,” and “to reduce the number of handguns in civilian ownership, by outlawing . . . all handguns except those intended for sporting purposes.”

But, Kennedy added, “if [banning handguns] is not feasible we may be obliged to place strict bans on the production and distribution of ammunition. No bullets, no shooting.”

Since then, Kennedy and others in Congress have introduced bills to ban or impose outrageous taxes on .25, .32, 9mm, 5.7x28mm, and .50 caliber ammunition; cartridge cases less than 1.3" in length; hollow-point bullets; ammunition that “serves no substantial sporting purpose and serves primarily to kill human beings”; and (via the Consumer Product Safety Commission) “defective” ammunition. And who can forget the outrages feigned by media-hungry politicians over “Black Rhino,” Rhino, Black Talon, Blammo Ammo and other dubious threats?

I wish I could report otherwise, but I’m certain we can expect more bills and rhetoric of that sort after the November elections. In addition to federal and state-level gun bans of various stripes, there will also be a concerted effort to prevent the use of firearms for self-defense, target shooting and hunting, by prohibiting the ammunition you need for all those activities.

Whether these proposed bans become law will depend on how many NRA members and other gun owners turn out to vote. I’ll be in the voting booth on Election Day 2008, and I hope you will be, too. Our ammo and our guns depend on it.

No Bullets, No Shooting!