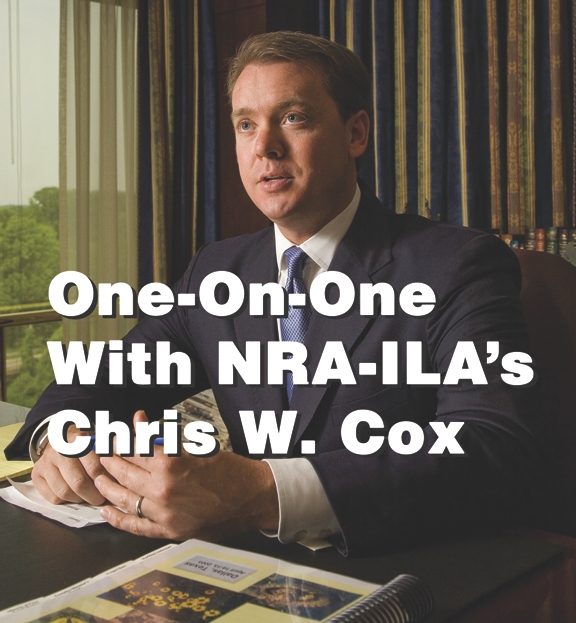 Chris W. Cox took over as the Executive Director of the NRA Institute For Legislative Action in 2002. Chris and ILA have had some incredible successes, but we now face some of the greatest threats ever to our Second Amendment rights. We recently caught up with Chris to give NRA members the inside track on how the fight for firearm freedom has been going, and what we can expect in the future.

AMERICAN RIFLEMAN: Chris, you’ve been with the NRA for 12 years, heading up the NRA Institute for Legislative Action for the last five. Exactly how do you view NRA-ILA’s primary mission?

CHRIS COX: I can give you the answer in five words: “ILA exists to influence legislation.” Influencing legislation--whether you’re talking about backing a proactive bill such as the Protection of Lawful Commerce in Arms Act in Congress or defeating a gun ban at the state level--requires concerted efforts in many different areas by many different people.

Of course, you influence legislation directly by lobbying legislators, and you do that effectively only by understanding that there are many forces and factors that influence their thinking and actions. Appreciating the entire dynamic and understanding how to honestly persuade--to press the right button at the right time--is what successful lobbying is all about. And NRA members and their friends should be proud that NRA is the most genuinely respected grassroots lobby in America.

AMERICAN RIFLEMAN: And ILA does more than “lobby” in the sense that most of us use that word.

CHRIS COX: You’re right, of course. A vigilant defense of the Second Amendment requires far more than direct lobbying. We have to carry on extensive fundraising activities. We must communicate regularly with our members. We have to maintain a strong legal team to fight anti-gun challenges. It’s also important that we maintain a research base to document NRA positions, not only to legislators but also to the media and to the general public through effective public relations campaigns. After all, ILA was created to persuade those who may disagree with us as well as to support our political friends and defeat avowed enemies.

AMERICAN RIFLEMAN: How do you see the fight to protect our Second Amendment rights changing over time?

CHRIS COX: I have to admit that sometimes we are tempted to think that the political battles we fight have never been fought before. Some believe that if we win this particular fight, our victory means we’ll never have to fight it again. The truth is, and America’s Founding Fathers certainly understood it, good people have always had to fight against despots who sought to take away their means to defend themselves. The fight began when the first ruler decided that the people couldn’t be trusted.

The historical record is clear. There always will be those who seek to disarm free people. That certainly is the case today, whether you’re talking about George Soros and his cronies at the United Nations, Michael Bloomberg and his gang of anti-gun mayors, or the “F-Troop” on Capitol Hill. The only difference is that today’s anti-gun politicians, such as John Kerry in 2004, don’t have the guts or the honesty to admit their real agendas.

AMERICAN RIFLEMAN: What then do you see the future as for our Right to Keep and Bear Arms?

CHRIS COX: As they say, all we know with certainty about the future is that’s where we’ll spend the rest of our lives. However, I am sure of one thing--the American people will never surrender their guns. The personal right to own firearms has been widely acknowledged and accepted since the birth of our nation. The recognition of the inherent right to bear arms sets us apart from the millions of enslaved and oppressed people of other nations. The Right to Keep and Bear Arms has always marked us as free citizens; it marks us as Americans.

AMERICAN RIFLEMAN: And yet aren’t there people who honestly believe that we would be better off if America were to become a gun-free nation? How do you explain that?

CHRIS COX: First, many of these are people who have decided that, absent any evidence to the contrary, you and I and tens of millions of our fellow citizens cannot be trusted and, therefore, must be controlled.

But, you’re right, there are good folks out there who support restrictive gun-control schemes. They either do not see the harmful downside or they see it and it doesn’t concern them. Some of them just want to feel good about themselves.

It falls to us to help these folks see the error in their thinking. We also have to reach the vast number of Americans who don’t care about our issue one way or the other. We need to educate them about responsible gun ownership so they’ll come to understand why they do need to care. We need to effectively make the case that the Second Amendment is the right that secures all others. That’s what we’re trying to do.

AMERICAN RIFLEMAN: Chris, what are the most rewarding and frustrating aspects of this challenging job?

CHRIS COX: The things that are the most frustrating, obviously, include dealing with the national news media that shamelessly portrays NRA’s position in a negative light, and flat-out misrepresents and lies as to what our positions are. A recent example is the terrorist watch-list issue, where they were suggesting the NRA wants terrorists to have access to firearms, which obviously couldn’t be further from the truth. Our members have fallen in Afghanistan and Iraq, and they serve as law enforcement officers and first responders all over the country. We are completely anti-terrorist. We believe in civil liberties and that the Constitution actually means something. To allow an un-elected bureaucrat to have arbitrary authority to deny an American citizen--without due process--the right to own a firearm is outrageous.

Whether it comes from Alberto Gonzales, Frank Lautenberg, Hillary Clinton or anyone else, we are going to fight them. That’s what we do every day.

People ask me about how I deal with the Chuck Schumers and the Hillary Clintons … well, that’s part of the job. I’m really more concerned, both personally and professionally, by the fact that there are a lot of gun owners in this country who have bought into the lies of the national news media and gun-control groups.

I was recently on a quail hunt in Georgia, and I spent my entire weekend explaining to a federal judge that the Clinton gun ban, a federal law that sunsetted in 2004, had nothing to do with machine guns. I had to explain the same thing to a doctor. I had to explain to two union workers again that the gun ban that expired in 2004 had nothing whatsoever to do with machine guns. And these were all hunters. But that perception exists within our like-minded family and people who enjoy the shooting sports and enjoy all the great fruits of our labor and all the side benefits of the Second Amendment.

It’s disappointing that people who should know better don’t. But that’s the job all of us have as NRA members--to make sure this message