What Does AGS Really Stand For? 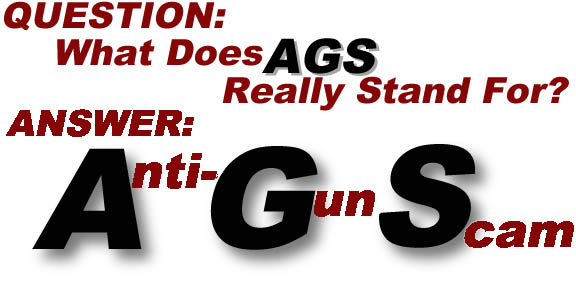 No claim is too outrageous for the anti-gun lobbyists masquerading under the name "Americans for Gun Safety" (AGS). Unfortunately, much of the media is willing to play along with AGS`s deceptions, depicting the group as a "moderate voice," a "third way" in the gun-policy debate.

For the record, AGS has nothing to do with gun safety. It is an organization whose sole founder, a former board member of Handgun Control, Inc., has a highly focused and barely hidden agenda: licensing all American gun owners and registering every firearm they own.

AGS is staffed by the architects of the anti-gun schemes of Bill Clinton and Sen. Charles Schumer. Its president is Jonathan Cowan, who served at the right hand of the self-appointed anti-gun Czar of the Clinton cabinet--HUD Secretary Andrew Cuomo, whose agenda for fighting crime revolved around threatening nonsensical lawsuits against gun makers. Cowan is assisted by Clinton White House political aide Matt Bennett, and by Jim Kessler, the former gun-control advisor to Senator Charles Schumer.

These credentials may explain the insistence of AGS in perpetrating clear falsehoods. The previous Administration championed the tactic of "tell a lie often enough, and soon it becomes the truth." AGS is clearly hoping that the same tactic will prevail in its assault on gun shows.

Gov. Ridge signed "The Pennsylvania Uniform Firearms Act of 1995" (also known as Act 17), which simply specified that after the state`s instant check system became operational, all persons purchasing any firearm from a licensed dealer would be subject to an instant records check wherever the purchase was made. The requirements for transferring handguns between individuals in Pennsylvania were set in 1934, and Act 17 made no changes in the requirements for transferring handguns at gun shows.

What Gov. Ridge signed--and AGS shamelessly praises--is much closer to the NRA-supported Dingell provision than anything in the AGS-supported McCain Lieberman-Schumer bill. Act 17 did: 1) define gun shows in a manner that specifically recognized and respected their unique and temporary nature; 2) recognize the superiority and effectiveness of an instant record check system and eliminate the state`s 60-year-old waiting period on handgun purchases; and 3) eliminate the need for a firearm dealer to obtain a separate license in each county where he might wish to conduct business at a gun show.

When AGS claimed that Act 17 "requir[ed] background checks for handguns and assault weapons sales at gun shows," NRA responded that the law actually continued a longstanding exemption for rifle and shotgun sales by private citizens and noted the term "assault weapon" does not occur in Pennsylvania state law.

Trying to salvage some credibility, AGS contended that it was "careful" not to make claims about rifles and shotguns and that it was really talking only about "assault weapons" that are "defined by federal law" and that have "barrel lengths that fit the coverage of Act 17, of which there are many."

This definition of short-barreled shotguns and rifles mirrors the federal National Firearms Act of 1934 that severely restricts the transfer of such firearms and others such as machine guns. Such firearms are not available for over-the-counter purchase at any gun show or retailer anywhere in America.

Far from including "many" of the federally banned "assault weapons," this definition would not include a single one of the standard production pre-1994 rifles or shotguns specifically defined as "assault weapons" in federal law. AGS`s ignorance or intentional misrepresentation of this key Pennsylvania definition of "firearm" makes its claim utterly worthless. Nonetheless, AGS continues to employ this obvious deception in its ads.

In its desperation to abolish gun shows, AGS also continues attempts to fabricate a gun show "loophole." The truth, of course, is that existing firearms laws apply at gun shows the same as any other place guns are sold. Since 1938, persons engaged in the business of selling firearms have been required to obtain a Federal Firearms License (FFL). Engaging in the business of selling firearms--at a gun show or anywhere else--without an FFL is a federal felony.

AGS also claims "convicted felons have known about this loophole for years." The truth is that multiple federal government studies prove that gun shows play virtually no role in criminal gun acquisition. Last year`s Bureau of Justice Statistics report "Firearms Use by Offenders"--the largest such study ever conducted--found less than one percent of U.S. "crime guns" were obtained at gun shows. This report is entirely consistent with previous federal studies.

AGS wants to inject "terrorism" into the firearm policy debate at any cost, and it is willing to employ serial lies to forge a link between "terrorist" cases and gun shows. AGS continues to cite the case of an "IRA terrorist" even though the jury that convicted the man for firearm violations acquitted him of the specific charge that he was an IRA terrorist. That AGS continues its bald-face lie in the face of public record speaks volumes.

Additionally, the record is clear that the guns in question were bought at gun shows by "straw" purchasers (individuals with "clean" records who are willing to violate federal law and illegally purchase firearms on behalf of criminals prohibited from doing so)--and absolutely nothing in the legislation AGS deceitfully promotes would have prevented those illegal acts.

AGS also continues deceptively to manipulate a case in which the FBI suspected a man of attending Detroit-area gun shows to acquire guns for shipment to the Hezbollah. After the FBI placed the man under surveillance, he was arrested, prosecuted and convicted in federal court--enforcing existing firearms laws worked.
AGS`s ad deceitfully fails to note that the suspect, Ali Boumelhem, was a convicted felon and as such was prohibited from buying guns anywhere--including gun shows. To suggest he slipped through a "gun show loophole" is simply a lie. The best evidence available strongly suggests that the two shotguns Boumelhem was convicted for possessing were bought by a "straw purchaser." Again, nothing in the McCain-Lieberman-Schumer legislation AGS promotes would have prevented the illegal acts.

AGS`s previous misrepresentations of the facts in this case are telling. In an e-mail to Members of Congress, AGS`s Jim Kessler states, "an FBI informant previously has seen Boumelhem in Beirut unloading shipments of weapons and explosives." The Middle East Intelligence Bulletin, which AGS cites as its source, is much more specific, saying the FBI informant "had seen Boumelhem in Beirut unloading shipments of automatic weapons, explosives, grenades and rocket launchers."

Clearly, "automatic weapons, explosives, grenades and rocket launchers" was changed to "weapons and explosives." Why? Because AGS knows full well that none of those items can be bought or sold at any gun show. The intent was to mislead Congress.

AGSF "should be given a failing grade for its shoddy research," Evanko said. "The fact is that the group did not contact State Police for information, which we would have been happy to supply."

In the end, AGS has proven only that its staff doesn`t know guns, gun laws or even the proposals that they tout. The group has no members, no gun safety programs and no credibility.