President Biden dropped any pretense at “moderation” in his first address to a joint session of Congress since assuming the presidency. However much he tried to pad the early parts of his speech with bland, feel-good rhetoric, his remarks on gun control demonstrate that he is radical, out of touch, ill-informed, and bent on persecuting his political enemies over prioritizing important issues of general public interest.

If you didn’t catch the speech, don’t feel too bad. You were in good company. Biden pulled just over half the number of viewers who watched President Donald Trump’s first address to both houses of Congress.

Biden’s speechwriters used short sentences and sentence fragments to convey what would generously be characterized as his thoughts. The lack of detail was no doubt intentional to provide plausible deniability on fact checks and to avoid the darker implications of what he was proposing.

But even what managed to escape his mouth painted a preposterous vision of an American gun control regime totally at odds with the text, history, and tradition of America’s Constitution, the framework that sets us above and apart from other developed nations.

Biden, as he so often does, began his “argument” by misstating the facts: “In the 1990s, we passed universal background checks and a ban on assault weapons and high-capacity magazines that hold 100 rounds that can be fired in seconds.”

None of that is actually true.

Yet if the 1993 law that provides for federal background checks on transfers by those “engaged in the business” of dealing in firearms – whether at storefronts, kitchen tables, gun shows, or flea markets – is Biden’s idea of universal checks, we’d be glad to concede that point. We’d simply ask in return that he stop promoting bills like the pending H.R. 8, which would expand that federal background check requirement to noncommercial transfers between two law-abiding neighbors or coworkers, between cohabitants, or even between cousins or other relatives.

There was also a federal law enacted in 1994 that limited what features could appear on various types of semiautomatic rifles and banned other types of guns by name. The law additionally limited the capacity of newly-manufactured firearm magazines to 10 rounds, rather than the 15 to 30 rounds that come standard on many popular types of guns.

Biden claimed in arguing for a new “assault weapons and high-capacity magazines ban” that “[w]e’ve done it before, and it worked.”

Again, this is not true.

The old law certainly didn’t “work” in any way relevant to public safety. Independent researchers studying the law have repeatedly failed to establish any causal relationship to reduced firearm-related crime. We’ve written lengthy articles explaining this, including the one at this link.

The law Biden is so proud of didn’t actually do anything to change the operating characteristics of the guns that Biden and other proponents of the law claimed made them especially dangerous. And the guns were so seldom used in violent crime in the first place that marginally suppressing their use did not and could not move the needle on homicide rates.

It is true that firearm-related crime rates declined in the years during and after the ban, but no one has ever convincingly shown that was as a result of the ban itself. This is the logical fallacy known to well educated eighth graders as post hoc, ergo propter hoc, or “after this, therefore because of this.”

If that were true, Biden would also have to admit that the exploding popularity and availability of lawful concealed carry during the same timeframe had precipitously driven down crime. The evidence for a causal connection is if anything much stronger in the concealed carry context, as economist John Lott has demonstrated in repeated studies on the issue.

Biden also said, “Talk to most responsible gun owners, most hunters – they’ll tell you there’s no possible justification for having 100 rounds – 100 bullets – in a weapon.” To this he ad-libbed a lame and oft repeated joke in the gun control world, as if were his own sick burn: “What do you think, are deer wearing Kevlar vests?”

The firearm magazines Biden is targeting, however, are not only or primarily the relatively obscure 100 round drums. Under his proposed restrictions, the upper limit would be 10 times less than that, or 10 rounds. These are the factory-supplied magazines that come as standard equipment on the most popular types of firearms tens of millions of Americans lawfully use for concealed carry and to protect their homes. A capacity of 15 to 17 is a normal range for a 9 mm handgun magazine, the archetypical modern self-defense handgun.

And while many Americans do indeed hunt deer with AR pattern and other semiautomatic rifles, many millions more have made these the most popular types of rifles in the country for what the U.S. Supreme Court recognizes as the core principle of the Second Amendment: home and self-defense. The typical AR-15 is sold with a magazine holding between 20 and 30 rounds.

The reason Americans and manufacturers should be able to choose the magazine capacity that is right for them is obvious: criminals don’t play by the rules. They often attack in groups, outnumbering their victims. They carry any weapon configurations they want, whether they’re legal or not. They are often under the influence of drugs that increase both their aggressiveness and resistance to pain, meaning their predations may continue long past the capacity of a person who wasn’t chemically supercharged. Indeed, some may even be wearing body armor, an element of preparation that would give them an advantage over unwary victims, even those equipped to defend themselves.

Unfortunately, innocent law-abiding victims don’t get to choose when, how, where, or against whom they’ll be fighting for their lives. But Joe Biden’s gun control policies would ensure that whatever the circumstances, their law-breaking assailants would have all the advantages.

Regarding the “assault weapons” ban Biden now supports, modern versions introduced in Congress are much more sweeping than in the past. If the former law did anything, it highlighted to gun owners the utility and benefits of the AR platform, catapulting it to the most popular type of centerfire rifle sold in America.

Yet as Justice Clarence Thomas pointed out in dissenting from the Supreme Court’s refusal to hear an assault weapons ban case, the court’s landmark decision in Heller v. McDonald “asks whether the law bans types of firearms commonly used for a lawful purpose—regardless of whether alternatives exist.”

Roughly five million Americans own AR-style semiautomatic rifles. … The overwhelming majority of citizens who own and use such rifles do so for lawful purposes, including self-defense and target shooting. … Under our precedents, that is all that is needed for citizens to have a right under the Second Amendment to keep such weapons.

In the years since Thomas wrote those words in 2015, the popularity of AR-15s and similar semiautomatics has only increased, with some 20 million now in circulation in the U.S. It is those guns in the hands of peaceful, law-abiding Americans that Biden wants to ban.

Biden also mentioned what he called “ghost guns,” or firearms manufactured by individuals without serial numbers or the permission of the government. “Anyone from a criminal to a terrorist could buy this kit and, in as little as 30 minutes, put together a lethal weapon,” he declared. Then he added, “But not anymore.”

Biden is referring to his ongoing attempt, not just to regulate kits with all the parts necessary to make a firearm, but to empower federal regulators to unilaterally define and redefine what a “firearm” is under the law, altering the definition whenever they consider it necessary to expand their authority. From what we’ve seen of Biden’s proposal so far, this initiative wouldn’t clarify existing law; it would simply bypass it and allow the regulators to rule by decree.

That is not American. And it is certainly not moderate.

There were more inane statements about guns in Biden’s speech, too many to exhaustively debunk in one article. But one deserves special mention.

Biden insisted that gun control is not a partisan issue and that the country and gun owners were behind him on it. “We’re not changing the Constitution,” Biden declared. “We’re being reasonable.”

That was the biggest lie of all.

In fact, a recent Washington Post/ABC News poll showed that preference for stricter gun control is down 16% since April 2018, despite the media’s obsessive reporting on high profile crimes committed with firearms in March. The nation is now essentially evenly divided on the issue, with only 50% favoring stricter laws.  Those who consider themselves political independents believe Biden is doing “too much” on the issue by a 7 point margin, with only 28% of independents supporting his approach. Biden’s current gun control agenda, in fact, failed to gain majority support from Republicans, Independents, or even Democrats.

That’s hardly a mandate for the sweeping restrictions Biden seeks, which among things would criminalize possession of the most popular rifles and magazines in America today, potentially creating millions of new felons out of formerly law-abiding citizens.

But, targeting law-abiding gun owners is really the point of gun control laws anyways, and Biden’s continuous lies on the topic only serve to continually highlight that point. 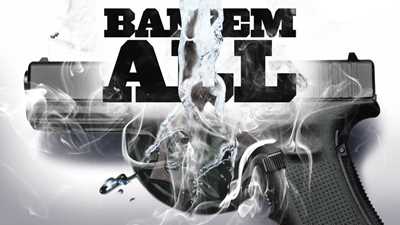