House Bill 1911, by Rep. James White (R-Woodville), and House Bill 1927, by Rep. Matt Schaefer (R-Tyler), NRA-backed permitless carry proposals that would allow law-abiding citizens to carry a handgun without a state-issued License To Carry (LTC), have been reported out of the House committee but have not yet been scheduled for debate on the House floor.  It's time for Texas to join the 20 other states that have legalized this personal protection option! 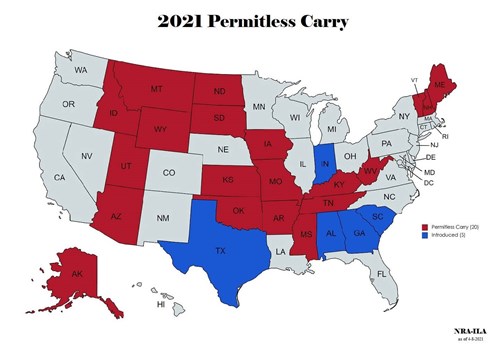 Please contact your State Representatives and urge them to PASS PERMITLESS CARRY THIS SESSION.  The existing LTC law would not be repealed under these measures.  Criminals who are prohibited from possessing firearms (i.e., felons, fugitives from justice, individuals committed by the courts for mental illness, domestic abusers) would still be barred from carrying guns.  This legislation would not prevent the enforcement of any laws broken by criminals who misuse firearms.

Senate Bill 18, by Sen. Brandon Creigton (R-Conroe), establishes that firearm and ammunition manufacturers, distributors, wholesalers, suppliers and retailers are essential businesses that shall not be prohibited by state or local officials from operating during a declared disaster or emergency.  This bill ensures that law-abiding Texans can exercise their constitutional right to purchase and own firearms during future disasters or emergencies, regardless of any statewide or local officeholder's personal politics.

Senate Bill 19, by Sen. Charles Schwertner (R-Georgetown), discourages banks, payment processors, insurers, and other financial services providers from discriminating against members of the firearm and ammunition industries.  The legislation prohibits businesses that engage in this practice from contracting with governmental entities in the Lone Star State.  Taxpayer dollars should not be used to benefit the bottom-line of corporations that are actively working to erode the Second Amendment rights of law-abiding Texans.

Senate Bill 20, by Sen. Donna Campbell (R-New Braunfels), protects the ability of hotel guests to lawfully possess handguns and ammunition in their rooms, and to transport them directly en route between their vehicles and their rooms.  Hotels frequently fail to include information on their websites, or in reservation notices, to inform guests about restrictive firearm policies. This forces gun owners, upon arrival, to consider leaving their firearms in their cars or trucks and make them susceptible to theft, in order to comply with policies they knew nothing of in advance.

Senate Bill 550, by Sen. Drew Springer (R-Muenster), eliminates the requirement that a holster for an openly-carried handgun by a License To Carry holder be a belt or shoulder holster.  This change will allow LTCs who carry openly to choose the type of holster that best suits their personal situation and self-defense needs.

Senate Bill 1253, by Sen. Bob Hall (R-Edgewood), affirmatively preserves the ability of Texans to obtain a License To Carry for reciprocal purposes with other states, even if the licensing requirement for lawful carry of a handgun is eliminated (*Note: none of the permitless carry proposals moving in the Legislature repeal Texas' License To Carry law*).​

These measures could be debated by the Texas Senate as early as this week!  Please contact your State Senators and urge them to SUPPORT these NRA-backed bills when they come to the Senate floor for consideration.