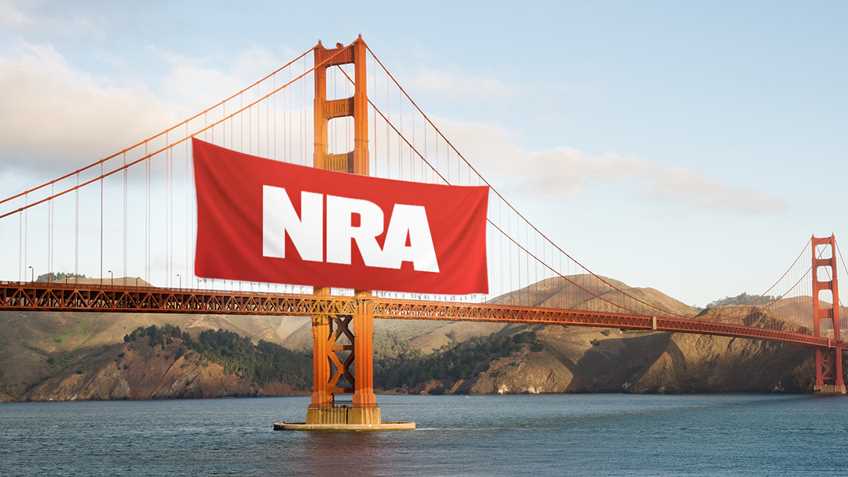 San Francisco boomed during the Gold Rush and had been a symbol of American ingenuity and prosperity. Now it’s home to would-be corporate overlords. These autocrats use their market dominance to threaten and shut down lawful businesses that engage in – or even with – industries that displease them. They’re more than willing to bend or misapply their own declared rules if it means hurting the “right” people or industries.

Rosanna and Michael Sharps ran a gift shop in the Sierra Nevada foothills selling memorabilia like that which visitors could have found in shops during the Gold Rush. They sold clothing, books, and toys. They don’t sell firearms; they sell non-firing replicas of 18th and 19th century firearms that cannot be modified into a working firearm. These are display pieces and toys.

This merchandise was approved by the California Department of Parks and Recreation, which granted the Sharps the contract to operate their shop in the Columbia State Historic Park. If a California government agency authorized the replica firearms, it can safely be assumed that these are in no way remotely close to an actual firearm.

After two years of building their business around the Square platform, Square terminated the Sharps’ account. The Sharps believe the non-firing replicas and toys sparked the ire of Square, but the corporation won’t give them a specific reason. The Sharps were forced to shut down both their physical shop and their online store

Square is run by the same CEO as Twitter – Jack Dorsey. Dorsey is quite willing to limit access to his platforms – which the small businesses like the Sharps’ paid for – based on his own shifting personal agenda. Dorsey uses unpredictable and arbitrary reasoning to spontaneously terminate his clients’ accounts on Square.

Dorsey and anti-gun, anti-freedom people like him are entitled to their views. The astounding piece of this story is that Dorsey’s company did business with the Sharps for two years before determining that the Sharps’ existing merchandise was displeasing to those in the San Francisco tower. We’ve seen this story before, though usually companies like Square go after firearms manufacturers or sellers. Now they’re targeting a small business for selling toys deemed acceptable by California.

Square claims that they “believe everyone should be able to participate and thrive in the economy.” That should be amended to “everyone who does not believe in, or appear to believe in, the individual right to keep and bear arms.”

The Sharps violated no law and yet their business has been shut down. Cutting off financial services is a path favored by the professional anti-gun activist class, who have not been able to have their gun control dreams enacted by law. If gun shops and manufacturers cannot be outlawed, the gun controllers seek to make them impossible to operate. Efforts to change the American tradition of gun ownership, to shift the gun-owning culture of the United States, catch small businesses like the Sharps’ that have nothing to do with operational firearms.

We know the Biden Administration wants to overturn the Protection of Lawful Commerce in Arms Act that protects firearms manufacturers and sellers from frivolous lawsuits designed to bankrupt them.  Only time will tell if President Biden permanently blocks the protections against discrimination in banking President Trump established.

If Biden clears the path to corporate gun control, your rights will be nullified at San Francisco cocktail parties.

Law-abiding gun owners won’t be invited. Other than the security guards hired to protect the corporate overlords, that is.