John Ossoff is LYING About His Anti-Second Amendment Positions 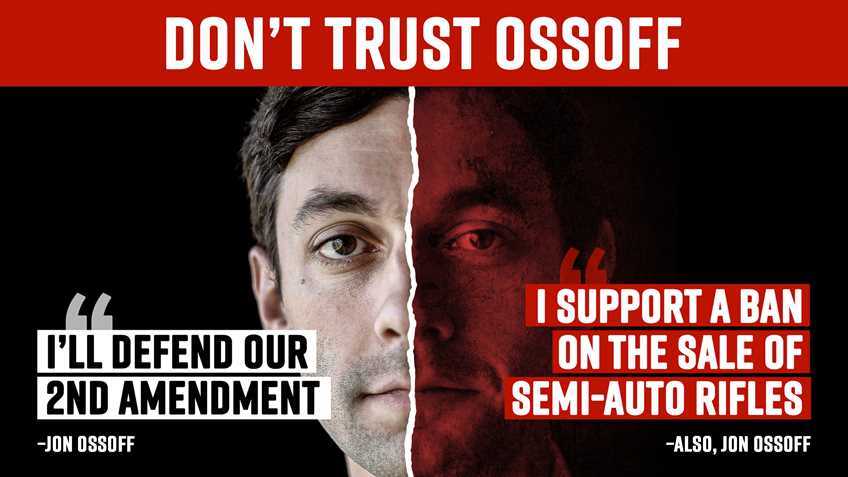 In a further sign that gun control is not a winning issue in 2020, Georgia Democratic U.S. Senate candidate John Ossoff is running ads where he deceitfully claims that he would “defend our Second Amendment.” In truth, Ossoff’s support for unconstitutional gun control, including a ban on commonly-owned semi-automatic firearms like the AR-15, has gotten him the endorsement of billionaire Michael Bloomberg’s anti-gun group Everytown for Gun Safety.

Ossoff has made his anti-Second Amendment positions clear on his own website.

Ossoff supports “a ban on the sale of semi-automatic rifles (“assault weapons”) and high-capacity magazines to the general public.”

Banning commonly-owned semi-automatic firearms is unconstitutional. In the landmark Second Amendment decision in District of Columbia v. Heller, the U.S. Supreme Court made clear that the Second Amendment protects ownership of firearms “in common use at the time” for “lawful purposes like self-defense.”

The firearms industry has estimated that Americans own more than 17.5 million semi-automatic rifles. The AR-15 is the most popular rifle in the U.S. and therefore indisputably “in common use” and protected by the Second Amendment. Similarly, there are hundreds of millions of magazines capable of holding more than 10 rounds of ammunition in the hands of law-abiding citizens. Many of the most popular rifles and handguns are designed to use, and come equipped with, these ubiquitous magazines.

All doubt as to whether the Supreme Court’s decisions in Heller and McDonald v. Chicago preclude bans on commonly-owned semi-automatic firearms was settled in 2015. That year, Justice Antonin Scalia joined Justice Clarence Thomas in a dissent from the denial of certiorari in Friedman v. Highland Park, a case concerning a local ban on commonly-owned semi-automatic firearms.

Moreover, banning commonly-owned semi-automatic firearms and their magazines does not reduce violent crime.

In 1994, a 10-year federal ban on commonly-owned semi-automatic firearms and their magazines was enacted as part of the Clinton Crime Bill. Faced with the reality that so-called “assault weapons,” are rarely used to commit violent crime, a 1997 Department of Justice-funded study of the Clinton ban determined that “At best, the assault weapons ban can have only a limited effect on total gun murders, because the banned weapons and magazines were never involved in more than a modest fraction of all gun murders.”

A 2004 follow-up Department of Justice-funded study came to a similar conclusion. The study determined that “AWs [assault weapons] and LCMs [large capacity magazines] were used in only a minority of gun crimes prior to the 1994 federal ban,” “relatively few attacks involve more than 10 shots fired,” and “the ban’s effects on gun violence are likely to be small at best and perhaps too small for reliable measurement.” Presented with the overwhelming evidence of the ban’s inefficacy, Congress did not renew it.

Where enacted, so-called “red flag” or “extreme risk protection order” legislation has empowered the government to strip an individual’s constitutional right to keep and bear arms and seize their firearms pursuant to an ex parte order based on insufficient evidentiary standards. This means that a person’s firearms may be confiscated without notice to the respondent or a hearing or other opportunity for the respondent to be heard and present evidence with the aid of counsel – all necessary elements of due process.

A RAND survey of the available research on these unconstitutional gun confiscation orders concluded that “We found no qualifying studies showing that extreme risk protection orders decreased any of the eight outcomes we investigated.” Again, the “gun use outcomes” studied included “mass shootings” and violent crime.”

Consider what occurred at the outset of the COVID-19 pandemic. The vast increase in those seeking protection in the Second Amendment during that period of uncertainty caused the FBI's National Instant Criminal Background Check System (NICS) and Point of Contact State background check systems to buckle. Some jurisdictions that had criminalized the private transfer of firearms also shut down access to guns stores or their state criminal background check system. That lethal combination of misguided policies made it impossible for millions of Americans to acquire, or even borrow or lend, firearms during the crisis.

Further, background checks don’t stop criminals from stealing firearms, getting them on the black market, or getting them from straw purchasers. According to the U.S. Department of Justice, 75 percent of criminals in state and federal state prison who had possessed a firearm during their offense acquired the firearm through theft, “Off the street/underground market,” or “from a family member or friend, or as a gift.” Less than one percent got firearms from dealers or non-dealers at gun shows.

A 2013 memo from the Department of Justice’s National Institute for Justice surveyed the research on several gun control measures. In relation to a restriction on the private transfer of firearms, the NIJ determined that such a measure would be ineffective unless coupled with an onerous gun registration regime. In 2019, researchers at the Bloomberg School of Public Health and the UC Davis School of Medicine found that comprehensive background checks and prohibitions based on violent misdemeanors “were not associated with changes in firearm suicide or homicide.”