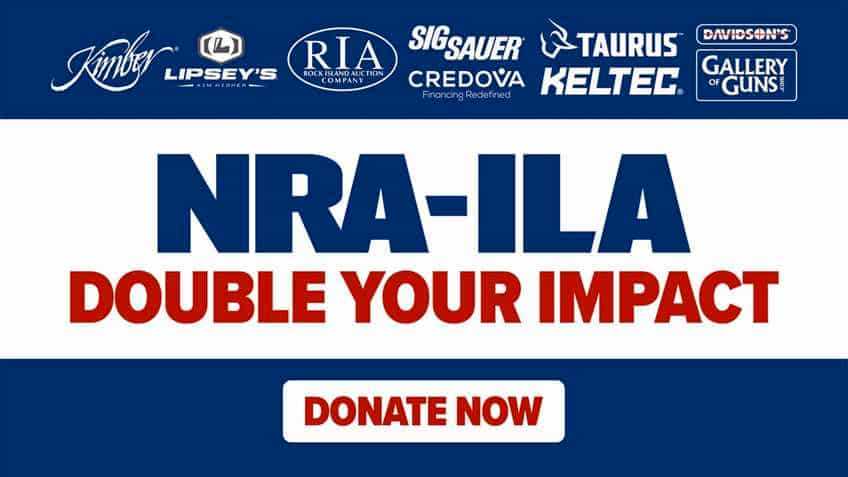 The National Rifle Association Institute for Legislative Action (NRA-ILA) is proud to announce a new partnership with eight companies that have pledged to match $1 million in donations made to NRA-ILA through Nov. 15, Partners for Patriotism.

“These patriotic businesses are pledging vital resources to support and defend the Second Amendment because they understand that our right to own a gun in defense of ourselves and our families is on the ballot in November. By working together with such partners, our membership intends to defeat those who are trying to strip our rights away from us,” said Jason Ouimet, executive director, NRA-ILA.

The campaign, Partners for Patriotism, is simple. Anyone who makes a donation to NRA-ILA between now and Nov. 15 will have their donation matched. Folks can make donations of any size - whatever they can spare is helpful. And because of this campaign, whatever is donated will automatically be doubled by participating companies.

Partners for Patriotism could not come at a better time. With the presidential election looming, the stakes have never been higher. Democratic presidential nominee Joe Biden and his running mate, Kamala Harris, have made their intentions clear: If elected, they will immediately work to enact gun control that could result in rifle confiscation, criminalization of private sales, tax and registration schemes, and elimination of a law that prevents gun companies from frivolous lawsuits.

“If you’ve considered donating in the past, but never got around to it — now is the time.  A donation now has twice the impact at the most critical time possible, as every dollar donated goes directly to NRA-ILA’s political fight for America’s Second Amendment,” Ouimet concluded.

This program is the best way to help protect the Second Amendment. We can still use your help! If you would like your donation matched by these participating companies click here. If your company would like to be involved with the Partners for Patriotism program it’s not too late, contact us here to learn more about becoming a Partner for Patriotism!

IN THIS ARTICLE
NRA-ILA Partners for Patriotism
TRENDING NOW

Kimber Joins Partners for Patriotism Match Campaign with up to $200,000 Pledge