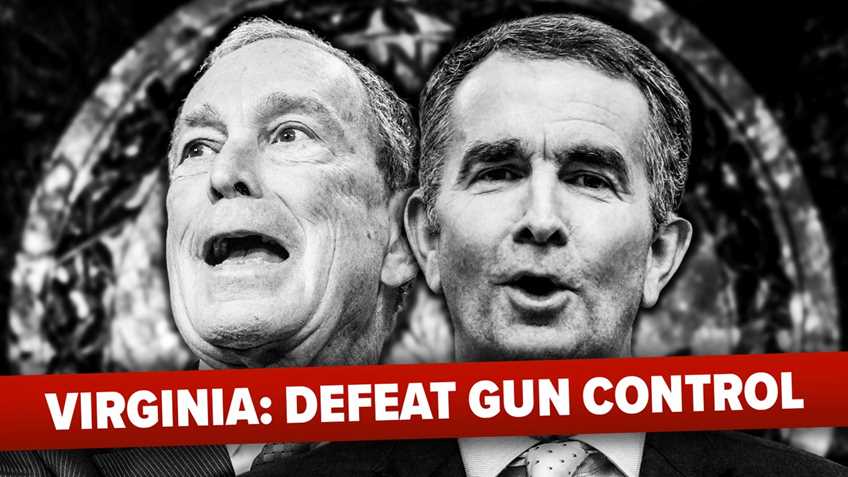 Despite the peaceful, orderly, and diverse gun rights protest that attracted tens of thousands of law-abiding gun owners to the state capitol, Virginia’s Michael Bloomberg-bought General Assembly has continued to push forward a radical anti-gun agenda.

In the Senate, the full body passed a dangerous “red flag” gun confiscation bill and the Judiciary Committee advanced another measure that would make it harder for Virginians to defend themselves and their loved ones. In the House, anti-gun committee members voted down a raft of bills that would have better protected the rights of law-abiding Virginians and measures that would have increased punishments for the criminal misuse of firearms. Rather than target violent criminals the House Public Safety Committee opted to advance a host of measures that would further burden ordinary gun owners.

The legislation would empower the government to strip an individual’s constitutional right to keep and bear arms and seize their firearms pursuant to an ex parte order. The proposed confiscation order could be issued without notice to the respondent or a hearing or other opportunity for the respondent to be heard and present evidence with the aid of counsel. Such safeguards are a requirement for adequate procedural due process.

Further, the bill provides civil and criminal immunity to any law enforcement agency that seizes a person’s firearms for “any damage to or deterioration, loss, or theft of such firearm.” Under this provision, a law enforcement agency could effectively destroy the entire value of an individual’s firearms collection through its own negligent or malicious conduct without the threat of civil or criminal sanction. The agency could chop a person’s confiscated guns in half or store them at the bottom of a lake and the owner would not be able to seek damages from the agency.

Also on Wednesday, the Senate Judiciary Committee attacked prospective Virginia Concealed Handgun Permit (CHP) holders by advancing SB263. This legislation would make it harder for CHP applicants by eliminating the option to use a video or online course to meet the training requirement.

This would create a significant burden for law-abiding Virginians. The availability of in-person firearms training may be limited or at a sizable distance for many in rural parts of the Commonwealth. In person training can be more expensive than a video or online option. Therefore, such a requirement is a form of economic discrimination on the right to keep and bear arms.

Those in need of a CHP due to an immediate threat to their safety would also be hampered by this bill. A video or online course can be taken immediately, whereas in-person training could take weeks or months to schedule and complete.

This is purely an attack on law-abiding gun owners, as the Commonwealth recognizes and promotes online learning in other contexts. From the Virginia Department of Motor Vehicles to the Commonwealth’s premier universities, state-endorsed online learning has provided convenience, value, and increased access to educational opportunities to the public.

Moreover, this attack on gun owners is in direct contrast to where the issue is moving. Understanding the important role online education plays and will continue to play in our society, an increasing number of states have recognized the value of online firearms education. In May 2019, Tennessee enacted legislation that allows a concealed handgun carry permit applicant to use “an electronic, video, or online course” to demonstrate competence with a handgun. Further, 16 states have recognized the Right-to-Carry a firearm without a permit, and therefore, without a requirement that a law-abiding gun owner prove their competency with a firearm prior to exercising their rights.

On Friday, the House Public Safety Committee advanced a series of radical gun control bills targeting nearly every aspect of the right to keep and bear arms.

HB2 would criminalize the private transfer of firearms in the Commonwealth. Unlike SB70, which was passed by the Senate, HB2 would criminalize almost all firearm transfers – not just sales. Under this extreme legislation, even lending a brother your rifle for a deer hunt or letting your daughter borrow a handgun for self-defense could land otherwise law-abiding Virginians with a felony conviction and up to 5 years in jail. Additionally, the recipient could face up to a full year of incarceration.

HB674 would create a “red flag” gun confiscation procedure that is similar to that created by SB240. Just like the senate bill, HB674 would empower the government to strip an individual’s constitutional right to keep and bear arms and seize their firearms pursuant to an ex parte order. However, whereas SB240 would require a commonwealth’s attorney or two law enforcement officer to petition the court, HB674 provides even less safeguards – allowing a single law enforcement officer to petition for a confiscation order.

HB812 would ration the right to keep and bear arms by limiting Virginians to one handgun purchase per 30-day period. Unlike SB35, which has passed the full Senate, HB812 does not provide an exemption to this restriction for CHP holders.

From 1993 to 2012, Virginia had a “one-handgun-a-month” law that rationed the number of handguns law-abiding gun owners could purchase to one a month. In 1993, Gov. L. Douglas Wilder and other gun control advocates sold the handgun rationing measure as a way to curb gun trafficking from Virginia to more restrictive Northeast states, particularly New York. HB812 comes along after New York City billionaire and gun control financier Michael Bloomberg spent an exorbitant sum in the 2019 election cycle. According to ATF Trace data, there were fewer firearms traced to Virginia in the three years after the law was repealed than in the three years prior to repeal.

HB9 would re-victimize burglary and robbery victims by penalizing a crime victim who fails to report the theft of a firearm to law enforcement within 24 hours of discovering the theft. These victims would be fined up to $250.

In the aftermath of a burglary, victims are occupied with a host of concerns. The first and foremost concern is the physical safety and well-being of themselves and their loved ones. To place an additional burden on crime victims in their moment of despair is the ruthless act of a callous state that exhibits no regard for the hardship victims face as they put their lives back together.

HB412 would eliminate Virginia’s state firearms preemption law. Current law ensures that those living and traveling throughout Virginia are subject to the same predictable state statutes wherever they are in the Commonwealth. With this regimen, law-abiding gun owners can move about the state without fear of being ensnared by a confusing patchwork of disparate local ordinances. Unable to predict or comprehend the contours of the various ordinances in Virginia’s 95 counties and 38 independent cities, CHP holders would be forced to forego their Right-to-Carry for fear of running afoul of an obscure or complicated local law.

The absence of a relationship requirement opens the §19.2-152.10 protective order procedure up to abuse. Verbal altercations between co-workers, neighbors, or less formal acquaintances where one party perceived, or claimed to perceive, the other as making a “threat” could result in the extinguishment of a person’s Second Amendment rights and the forfeiture of their firearms.

HB1083 severely restricts parental decisions about firearms in the home by making it a Class 6 felony to leave an unlocked and loaded gun in the home with a child or teenager under the age of 18. Current law only applies this restriction to children under the age of 14 and provides that the punishment for such conduct is a Class 3 misdemeanor. This law is unnecessary as Virginia already has a child abuse and neglect statute that provides felony penalties for parents who engage in dangerous conduct.

Illustrating their contempt for gun owners, the House Public Safety Committee refused to advance any of the bills that would make it easier for law-abiding Virginians to provide for the defense of themselves and their families. Worse, the anti-gun lawmakers made clear that their goal is to attack law-abiding gun owners rather than fight criminal violence when they voted down legislation that would have increased penalties for the criminal misuse of firearms.

The Public Safety Committee Firearms Subcommittee tabled sentencing bill HB1175. This legislation would have increased the mandatory minimum sentence for a first offense of the use of a firearm in the commission of a violent crime from three to five years imprisonment. The bill would have raised the penalty for subsequent offenses from five to 10 years imprisonment.

The subcommittee voted down HB669 and HB1485, which would have ensured that state and local employees who hold a CHP are permitted to carry for the defense of themselves and their coworkers. HB162 and HB1382 would have encouraged the Commonwealth and localities to implement adequate security measures at their facilities or to permit CHP holders to provide for their own self-defense by allowing Virginians to sue a jurisdiction for injuries sustained in a gun free zone.

Please contact your state Senator and strongly, but politely, ask them to stand with you and OPPOSE Senate Bills SB240 and SB263.

Stay tuned to www.nraila.org for updates. And, in the meantime, please sign up to volunteer to help defeat Gov. Ralph Northam and Michael Bloomberg’s gun control legislation. 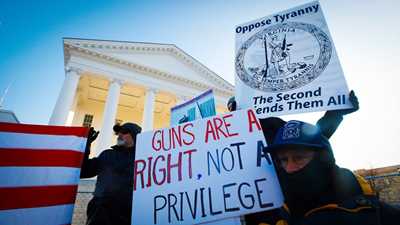